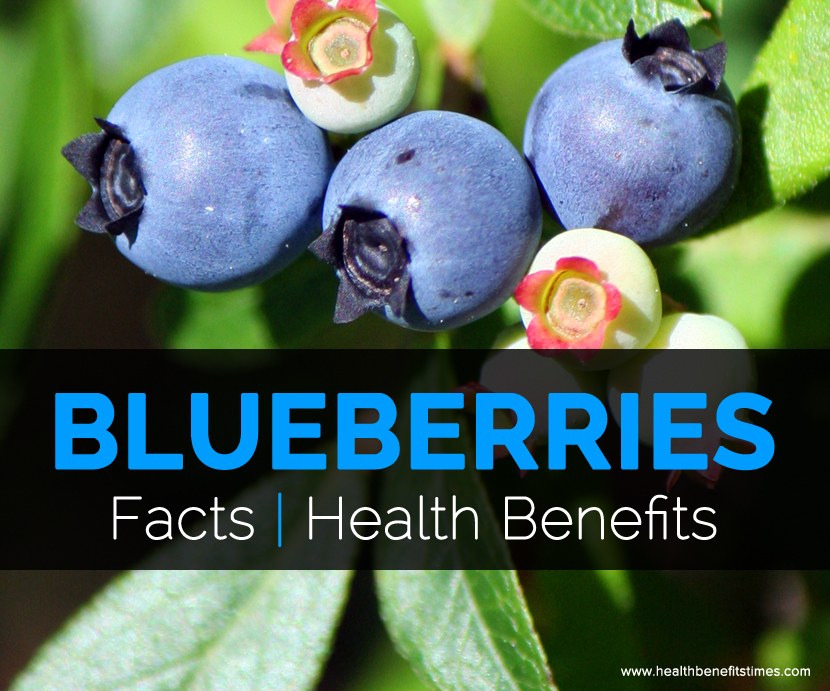 Blueberries, scientifically known as Vaccinium Corymbosum, are evergreen dwarf shrub in the genus Vaccinium and family Ericaceae. It is native to North America but now it is also cultivated in the Southern Hemisphere in Australia, New Zealand, and South American countries. The common names for blueberries are American blueberry, Blueberry, High Bush berry, Northern Highbush berry and Swamp bushberry. It is known from different names in different languages such as (Scots) Blaeberry, (Finnish) Pensasmustikka, (Dutch) Trosveenbes, (Italian) Mirtillo Gigante Americano etc.

It was cultivated by Elizabeth Coleman in the United States then it was introduced to the Europe in 1930s. After that it got introduced to the Great Britain, Europe, Russia, South Africa, Japan, Korea, New Zealand, Australia, Chile, Argentina and Uruguay in South America. There are numerous varieties of blueberries common three verities are Lowbush, Highbush, and Rabbiteye.

It is slow-growing, deciduous, monoecious and erect shrub which grows in very small size 10 centimeters and large shrub grows 4 to 5 meter tall. It is not shade tolerant so it should be grown in open or wooded areas with the moist, acidic, well-aerated and organic rich soils. The growing climate of blueberries starts in the Mid-May and usually ends in the September. It has the life span of 20 years. The buds of the flowers are ovoid, red and pointed. The flowers are white, pale pink or sometimes tinged greenish in color. The leaves are evergreen or deciduous from ovate to elliptical in shape with the length: 1-8 cm (0.39-3.1 inch) and broad: 0.5-3.5 cm (0.20-1.4 inch).

The fruit is 5-16 millimeters (0.2-0.6 inches) in diameter in a shape of small bell with a flared crown at the end. It weighs above half a gram. This berry comes in the shade of pale greenish at first then reddish- purple and finally it turns to the dark purple when it is ripened. The ones which have ripened have light green flesh in color. Blueberries usually ripen in the mid-season from late spring to late summer (July to August). It has more astringent and lightly sweet flavor. It has got sweet taste with variable maturity. Many soft and tiny noticeable seeds are possessed in the fruit.

Blueberry is the super fruit which has the ability to reduce the chances of cancer and heart disease also treats the Alzheimer’s disease. It possesses the antioxidants which inhibits the effect of the dementia. The research suggests that blueberries could improve the memory as well as cognitive function in older adults due to the presence of flavonoids known as anthocyanin.(1)

Another research report shows that blueberries helps to improve the memory as it possess high amount of antioxidants and other phytochemicals. It is also called memory enhancer. The regular consumption of blueberry juice enhances the memory and learning.(2)

The regular intake of one cup of blueberries helps to reduce the blood pressure and arterial stiffness which leads to the cardiovascular disease. The research shows that the regular intake of blueberries slows down the development of prehypertension and hypertension which also lowers the chances of cardiovascular disease. The regular consumption of blueberry enhances the blood pressure and arterial stiffness with the pre- and stage 1-hypertension in postmenopausal women. The finding also shows that the blueberry if added to the diet helps to alleviate the cardiovascular effects which occur due to menopause. The nitric oxide increases by 68.5 percent which helps to widen the blood vessels.(3)

The research has shown that the daily consumption of blueberry lowered the chances of cardiovascular disease and metabolic syndrome. The result was found even better when it was combined with a low fat diet. The intake of blueberry also affected the genes which are related to the storage and burning of fat. It possesses the chemicals such as anthocyanin which effectively treats such health ailments.(4)

The research shows that the blueberries could reduce the obesity. It possesses the polyphenols which counteracts the adipogensis which is the fat cells development and also encourages the lipolysis which means the breaking down of the fat or lipids. Blueberry if taken in high dose decrease the lipids by 73% and the low dose reduces the lipids by 27%.(5)

The post-traumatic stress patients could experience flashbacks, emotional detachment and jumpiness which affect their ability to perform their daily functions. The research which was conducted on rats shows that the rats who receive a blueberries have an increase in 5-HT with no effect on NE levels. So it suggests that blueberries can effectively modulate neurotransmitters in post-traumatic stress.(6)

It is a known fact that blueberries possess huge amount of vitamins and antioxidants. The research shows that the presence of fiber in blueberry can protect and alleviate the intestinal inflammations such as ulcerative colitis. The effect is much better when it is consumed with probiotics. The report shows that the types of dietary fiber and bacteria which promotes health such as bifidobacteria and lactobacillus can inhibit the chances of ulcerative colitis and colorectal cancer. It possess huge amount of polyphenols which has the antimicrobial and antioxidative effect. The blueberry if consumed with probiotics eliminates the inflammation inducing bacteria in the intestine and increases the health promoting bacteria called lactobacilli.(7)

The blueberries are rich in antioxidants which enhance the antioxidant defenses and prevent the oxidative stress such as cardiovascular system. The evidence which is found also shows that the daily intake of blueberries reduces the oxidative stress. It also reduces the chances of neurodegenerative disease in older adults, younger healthy adults and middle-aged obese adults. The antioxidant properties also protect the digestive tract and prevent the cancer related to colon.

The research which was conducted on the repeated studies of blood composition, the intake of 1-2 cups of blueberry in a day improves the balance of blood fat with the decrease in total cholesterol, increase in HDL cholesterol and decrease in triglycerides. It also shows that it also protects the components of blood from the oxygen damage which results to the blood vessel clogging. The blueberries are able to raise an antioxidant capacity of plasma.

The research which was conducted on the intake of blueberry and blood sugar balance shows that those who had consumed blueberries had the favorable impact on the regulation of blood sugar in the persons with type 2 diabetes.

Blueberries are low-GI (Glycemic Index) fruit because it possesses low glycemic index (GI) value. The recent studies shows that the 3 servings of low glycemic index (GI) fruits per day to the patients with type 2 diabetes improve the blood sugar regulation in three months. In this study, their blood levels of glycosylated hemoglobin, or HgA1C were used as the standard of measurement. It also possess adequate amount of fiber which is about 4 grams per cup.

Blueberries are rich in phytonutrient antioxidants which help to prevent the retina from the damage by the oxidative stress and sunlight. But the more research on this sector is still needed for the confirmation.

The study on the research, which has been conducted till now, on the laboratory animal and human cells showed the anti-cancer benefits of blueberry. Colon cancer, breast cancer, cancer of small intestine and esophageal cancer is already studied with the intake of blueberry. But the more research on human studies is still needed to confirm the use of blueberry to reduce the chances of these cancers.

Pregnant and breastfeeding women are not recommended to use the blueberries. It should be taken in limited amount. Blueberry should not be used before a scheduled surgery because it could interrupt with the control of blood sugar during and after the surgery. It could also interact with the medications such as glimepride (Amaryl), glyburide (DiaBeta, glynase PresTab, Micronase), insulin, pioglitazone (Actos), rosiglitazone (Avandia), chlorpropamide (Diabinese), glipzide (Glucotrol), tolbutamide (Orinase) and others. Those who are allergic to the stone fruit should avoid this.

The fruit is consumed by boiling, baked, raw or used like raisins whereas leaves are used to make the herbal tea. It could also be used in the form of jam, wine or raw.