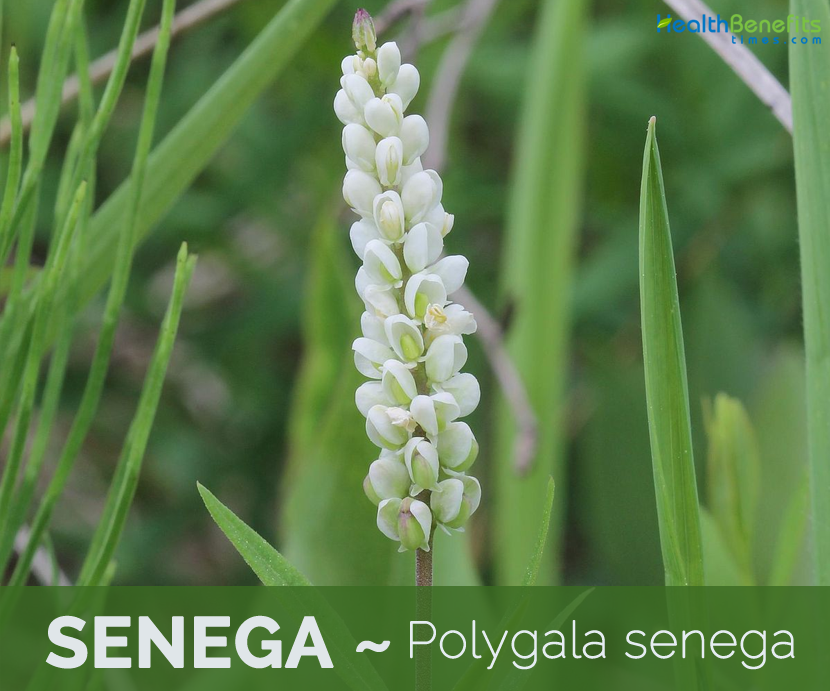 Polygala Senega commonly known as Senega root, Seneca snakeroot, Senega, senega snakeroot, senegaroot, rattlesnake root, and mountain flax and Milkwort is a species of flowering plant in the milkwort family, Polygalaceae. The plant is native to North America, where it is distributed in southern Canada and the central and eastern United States. It can be found from Newfoundland to Alberta in Canada and from New England to Georgia and Arkansas and west to Dakota in the United States. The name of the genus, Polygala, means ‘much milk,’ alluding to its own profuse secretions and their effects. ‘Senega’ is derived from the Seneca tribe of North American Indians, among whom the plant was used as a remedy for snake-bites.

Senega is a small perennial herb that grows about half a meter in height. The plant is found growing in upland gravel prairies, hill prairies, savannas, wooded slopes along rivers or lakes, and abandoned fields. The plant prefers to grow in thin, rocky, usually calcareous soils. Root is twisted and conical. Size range from the thickness of a straw to that of the little finger has as its distinguishing mark a projecting line, along its concave side. Roots are normally light yellowish grey to brownish grey colored.  The root sends up a number of smooth, slender, erect stems (as many as 15 or 20 or more), sometimes slightly tinged with red, from 6 inches to a foot in height, and generally unbranched.

Small, lance-shaped leaves are alternately arranged. The lower leaves are reduced and scale-like. The flowering spikes are borne in May and June on the ends of the stems and consist of numerous, small pinky-white flowers that are crowded on to a narrow, terminal spike from 1 to 2 inches long. The lower flowers develop first and have already fruited when the upper flowers open. Fruit is a capsule containing two hairy black seeds.

Traditional uses and benefits of Senega

Dosages for oral administration (adults) for traditional uses recommended in older and contemporary standard herbal and pharmaceutical reference texts are given below.