Trending
You are at:Home»Herbs and Spices»Facts and Benefits of Balsam Fir 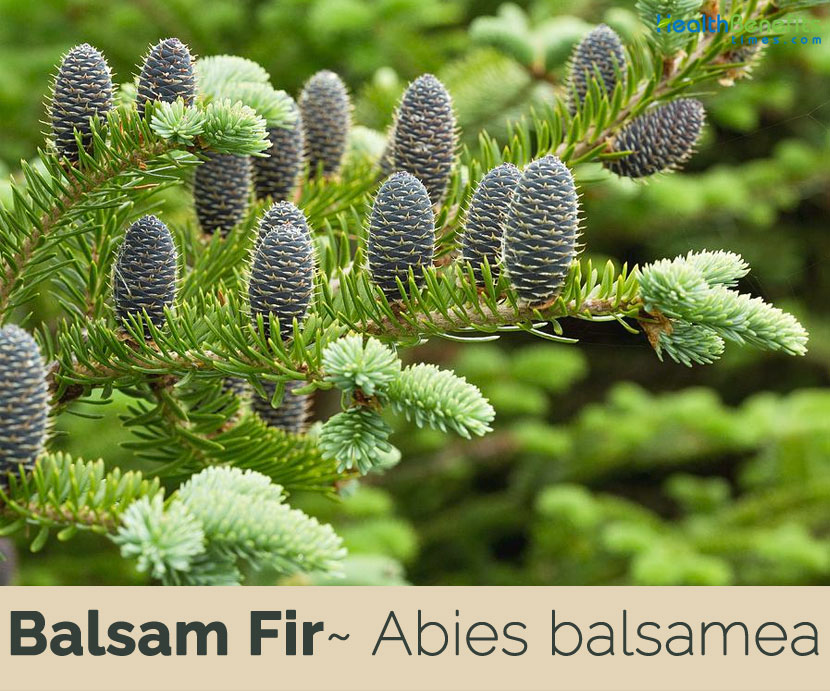 The balsam fir or balsam tree is a small to medium-sized, evergreen, coniferous, upright tree with a spire-like crown that normally grows about 4–20 meters (46–66 ft.) tall, occasionally reaching a height of 27 meters (89 ft.). The plant is found growing in mountain slopes, glaciated uplands as well as on alluvial flats, peat lands, swamps, forests and wetland margins. The plant can grow on a wide range of inorganic and organic soils originating from glaciation. The plant has shallow root system that is mostly confined to duff and upper mineral soil layers.  Roots rarely penetrate more than 30 inches (75 cm) below the ground surface, except in sandy soils. The balsam fir possesses a trunk that is dotted all over with sticky vesicles. Twigs pale green and pubescent when young, becoming gray, reddish, or purplish. Bark on young trees is smooth, grey, and with resin blisters (which tend to spray when broken), becoming brown, rough and fissured or scaly on old trees and are less than 0.5 inch (1.2 cm) thick.

Resinous branches are densely clad with shiny, dark green needles (leaves). Leaves are flat and needle-like, 15 to 30 mm (5⁄8 to 1 1⁄8 in) long, dark green above often with a small patch of stomata near the tip, and two white stomatal bands below, and a slightly notched tip. They are arranged spirally on the shoot, but with the leaf bases twisted so that the leaves appear to be in two more-or-less horizontal rows on either side of the shoot. The needles become shorter and thicker the higher they are on the tree.

Balsam fir is monoecious. In spring, 1 year before pollination, male (staminate) and female (ovulate or pistillate) strobili differentiate from flower buds. The strobili are microscopically recognizable at this time. Male strobili usually are distinguishable before the female strobili because they initially develop more rapidly. Flower buds usually open in late May or early June before vegetative buds.

Male strobili are yellowish-red and tinged with purple; develop in the axils of leaves along the undersides of the 1-year-old twigs, usually in dense clusters. Their position in the crown is mostly within 5 m (15 ft.) of the top and is almost always below the female strobili. Female strobili are purplish and are found singly or in small groups, confined to the top 1.5 m (5 ft.) of the crown. They are located on the upper side of the twig and, like the male strobili, develop on the previous year’s twig. Flower production is best on the outer end of branches. At maturity, male flowers are about 3 mm (0.1 in) long; female flowers are about 25 mm (1.0 in) long.

Fertile flowers are followed by erect cone 5 to 10 cm (2 to 4 in) long with short, round, irregularly notched scales and pointed tips. There are thin, closely overlapping fan-shaped scales near the center of the cone. The cone matures and ripens during the first fall in late August and early September. Cones are purple when young. As is distinctive with the firs, the cones appear upright on the branches. Cones disintegrate (scales drop) after the seeds ripen, often leaving only the erect central spike of the cone axis. Seeds ovoid or oblong, acute at base, with thin wing and resinous vesicles, maturing in one summer. 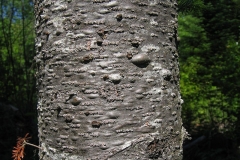 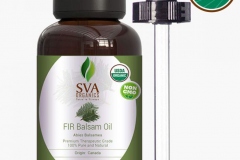 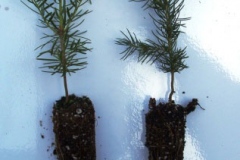 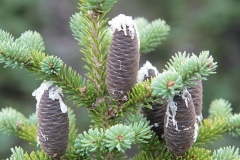 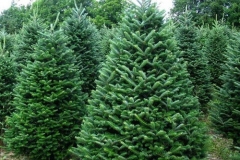 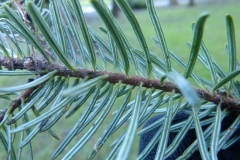 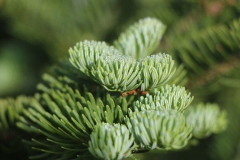 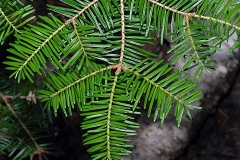 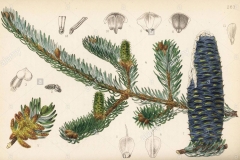 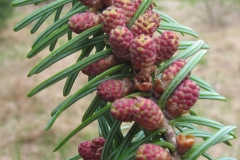 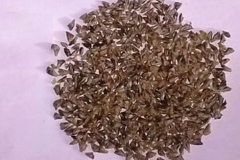 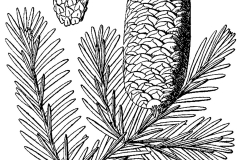 The appropriate dose of Balsam Fir for use as treatment depends on several factors such as the user’s age, health, and several other conditions. At this time there is not enough scientific information to determine an appropriate range of doses for Balsam Fir. Keep in mind that natural products are not always necessarily safe and dosages can be important. Be sure to follow relevant directions on product labels and consult your pharmacist or physician or other healthcare professional before using.