Trending
You are at:Home»Fruits»Facts about Banana Passion Fruit 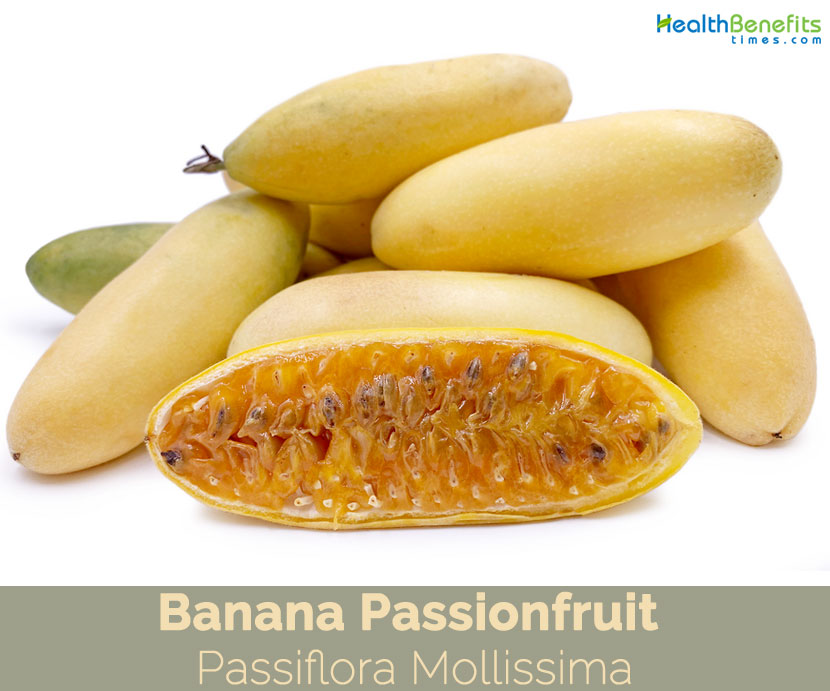 Passiflora mollissima also known as P. tripartita is a vine of the passion fruit family Passifloraceae, commonly known as banana poka in Hawai‘i.  It is one of more than 30 species of Passiflora in the Islands, all of which have been introduced.  The plant is native to Andes of South America, including eastern Cordillera of the Andes of Colombia, southeastern Andean slopes of Peru and western slopes of the Bolivian and Venezuelan Andes. Some of the common names of the plant are Banana passion fruit, Soft leaf passion flower, Sweet calabash, Banana passionflower, Banana poka, Bananadilla, Curuba sabanero blanco, curuba, tintin, tumbo, trompos, granadilla cimarrona, banana passion flower, banana passion vine, passion-flower vine and pink banana passion fruit. The fruits are known as Curuba in Colombia and Bolivia, Tacso in Ecuador, Parcha in Venezuela, and Tumbo in Peru. They are called Banana Poka in Hawaii.

The common name refers to the yellow, elongate shape of the mature fruit, superficially somewhat resembling a banana.   “Poka” is a Hawaiian word with the connotation “to climb.”   Banana poka is an aggressive vine that is rapidly invading mid- to upper elevation native forests.  It covers smothers and breaks underlying vegetation with dense mats of stems and foliage.  Resource managers of natural areas, such as those of Hawaii’s national parks, consider banana poka one of the highest priority forest weed species for bio control. There are two species of banana passion fruit, both very similar in appearance, and they have the scientific name Passiflora tarminiana and Passiflora tripartita var. mollissima, and they are from the family Passifloraceae, the family of passion fruit and other flowering plants.

Banana Passion fruit is a vigorous climbing, semi woody, perennial liana that grows up to 20 – 23 ft. (6-7 m) tall. The plant is found growing in watercourses, riparian areas, closed forests, forest margins, open woodlands, waste areas, hedges, trees, roadsides, buffer zones, plantation crops in temperate and occasionally also sub-tropical regions. Roots are shallow with 70% of the roots in the first 30 cm of soil. Stems are cylindrical and coated with yellow hairs. Like most of its relatives tendrils are borne in the leaf forks.

Alternately arranged leaves are 6-16 cm long, 7-20 cm wide, deeply 3-lobed, moderately to densely pubescent, grayish or yellowish-velvety on the underside and downy above, with clearly defined veins. They have toothed margins and the lobes are pointed. Their upper surfaces are hairless or almost hairless. Petioles are with 6-14 glands, stipules are obliquely ovate, 6-20 mm long by 12-30 mm wide, persistent.

The large pale pink flowers are about 6 cm across and 9-10 cm long and are borne singly in the leaf forks on stalks that are 3-10 cm long. Flowers hang downwards and at the base of the each flower are pair of bracts that is 3-4 cm long and 2-3 cm wide that can be mistaken for sepals. Five sepals and five petals are all very similar in size about 4.5-6 cm long and 1.2-2.5 cm wide and color. Their bases are joined together, forming a very long and narrow greenish-colored floral tube 6-8 cm long and 7-10 mm wide. Each flower also has five stamens and a hairy ovary topped with three white styles ending in green stigmas. Flowering can occur throughout the year.

The fruit of P. tripartita var. mollissima is an oblong or oblong-ovoid berry 5-12 cm long and 3-4 cm wide that has a soft but thick and protecting leathery that turns from green to yellow or pale orange in color as it matures, covered by a fine pubescence. The epicarp is hard but flexible and the mesocarp very thin. The salmon-colored pulp, making up 60% of the fruit weight, contains small, black, flat, elliptic seeds that are surrounded by a sometimes almost sweet; other times fairly sour aril, with a typical fine and special aroma. The common name refers to the yellow (when ripe) oblong-shaped fruit superficially resembling a banana.

Banana passion fruit are native to the tropical and subtropical Andean regions of South America, including Venezuela, Bolivia, Peru, and eastern Colombia. Banana passion fruit were introduced to the United States in 1920, when the Department of Agriculture received seeds from Ecuador and Colombia. They are not commonly grown in the United States today but are found in most tropical regions of the world, including in the Mediterranean, Africa, Australia and India. 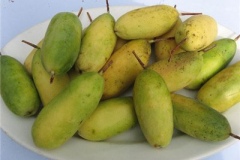 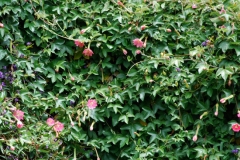 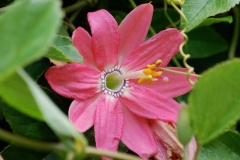 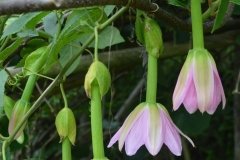 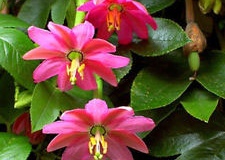 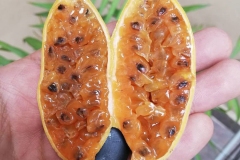 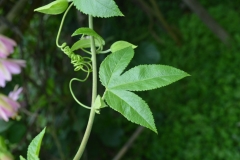 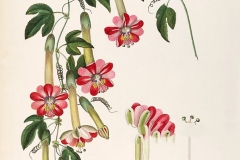 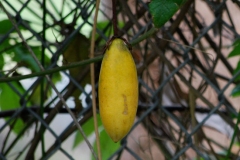 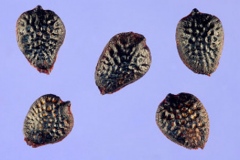 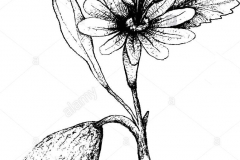 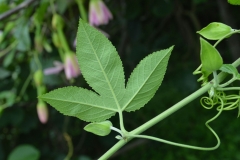 Because stems of P. mollissima do not readily sprout, mechanical means of control may serve in selected areas. Some sprouting has occurred on the abaxial cut surface, however. Careful use of these techniques may be effective for control of small populations in the immediate future.

Since the 1970’s, several attempts by the State of Hawaii and the National Park Service at control by physical and chemical means have met with little success. The extent and density of infestations make these methods uneconomical as well as ineffective. However, one exception was noted where forests of the endemic Acacia koa are being re-established on degraded montane forest land infested by P. mollissima. The application of a high dose of glyphosate prior to planting Acacia significantly reduced the mortality of Acacia by P. mollissima after 10 years; in contrast, all Acacia trees were killed on untreated plots.

Because of its widespread distribution and dense populations in many areas, some feel that overall control of P. mollissima in Hawai’i can only be achieved by using biological control. In the early 1970s, an alien passion vine butterfly, Agraulis vanillae, was introduced to Koke’e to control P. mollissima. Individuals did not readily establish on P. mollissima and were therefore unsuccessful in its control. The Division of Forestry then looked for biological control agents present in Hawai’i. Serious attempts at biological control began in 1981, when the Hawai’i State Legislature appropriated funds to begin control work on forest pest plants. P. mollissima is attacked by many pests and diseases in its native range but at present only one candidate, a moth, Cyanotricha necyrina, has been cleared by officials for release. Studies on the potential of Fusarium oxysporum f. passiflorae are in progress. High host specificity is needed due to the large commercial passion fruit industry on Hawai’i and the potential damage which might be caused to this by more generalist control agents.