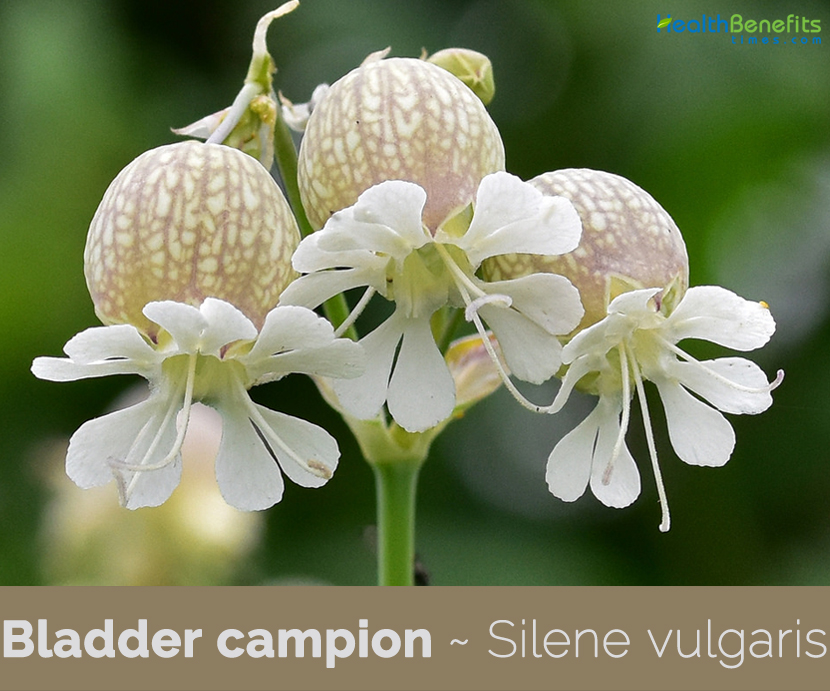 Silene vulgaris commonly known as bladder campion or maidenstears, is actually a perennial plant species of the genus Silene of the pink family (Caryophyllaceae). The plant is native to Europe and western Asia and naturalized throughout southern Australia and in New Zealand. Nowadays it has been introduced in many other regions of the world, being even considered as a weed. Few of the popular common names of the plants are bird’s eggs, bladder campion, blue root, bubble-poppy, cobwell, devil’s rattlebox, maiden’s tears, maidenstears, rattlebox, rattleweed, sea pink, snappery, white bottle, white hen, Bladder Silene, Cowbell, Blaassilene, smllor and Taubenkropf-Leimkraut. According to others, Silene is probably from the Greek σιαλον (sialon), saliva, referring to the gummy exudation on the stems of several species. In Latin, vulgaris means ordinary, common; and vulgaris or vulgare is an epithet frequently appearing in the names of weeds. This species is distinguished from other genus plants by this swollen calyx which is referred to in its common name.

Opposite leaves are up to 2½ inch long and ¾ inch across, sessile against the stems, and pale green to grayish green. They are usually oblanceolate, but sometimes lanceolate or elliptic. Their margins are smooth and slightly ciliate; otherwise the leaves are hairless to sparsely pubescent. They are arranged in an opposite fashion along the length of the stem.

Upper stems terminate in large panicles of numerous flowers. Each flower is ½-¾ inches across and ¾-1 inches long, consisting of 5 white petals that are deeply cleft (resembling 10 petals), a bladder-like calyx that is pale green to dull pink, 10 exerted stamens, and a pistil. The lobes of the cleft petals are narrowly oblanceolate. Swollen calyx is ovoid, hairless, and about ¾” in length. It has 20 longitudinal veins across its surface that is connected by a reticulated network of smaller veins. Compared to the calyx, the veins are a deeper shade of green or pink. The upper rim of this calyx has 5 broad triangular teeth. While in full bloom, the entire plant has a tendency to lean over to one side because of the weight of the flowers. Flowers are dioecious, which means that individual flowers are either male or female, but only one sex is to be found on any one plant, so both male and female plants must be grown if seed is required. Flowering normally takes place from June to August.

Fertile flowers are followed by spherical, thick-walled, many seeded, yellowish, 1.8-2 cm long capsule with 6 erect teeth. Seeds are normally kidney shaped, 1.5 mm in diameter, greyish, enclosed in a pod, and covered with rows of bumps. 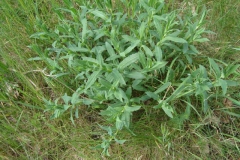 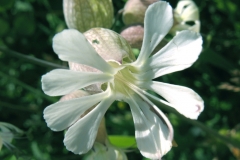 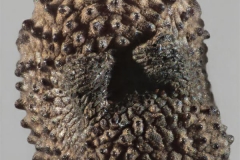 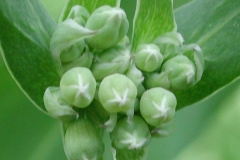 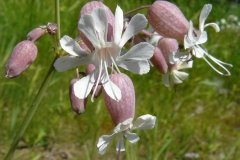 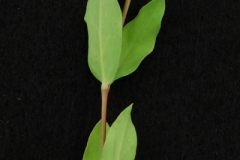 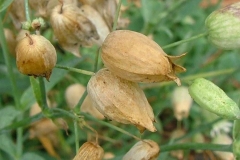 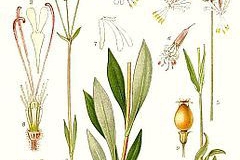 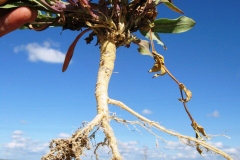 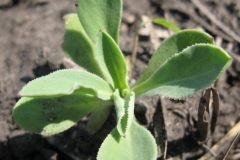 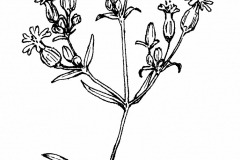 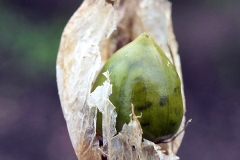 This species might be consumed since ancient times, but the earliest references we have found are from the seventeenth century in Spain and the eighteenth century in France. Cienfuegos, in the second volume of his manuscript work conserved at the Spanish National Library, mentioned its consumption together with other wild vegetables, such as Allium ampeloprasum L., Rumex pulcher L., and Anchusa azurea Mill., particularly important in times of scarcity. Bryant, in his Flora Diaetetica, mentioned this species as one of the better ones, when boiled, for salads, and even proposed that it should be cultivated. 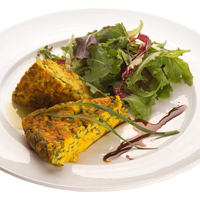 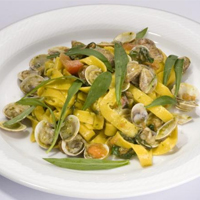 Prevention of seed production is the key to limiting the spread of bladder campion. Starvation through repeated tillage helps control established weed patches.

Intensive cultivation or mowing for two seasons is required to starve out bladder campion.

Crop rotation will only suppress bladder campion, not eliminate it. Do not put infested fields into perennial forage production, because this weed will multiply if undisturbed. Cereals offer good competition and allow for post-seeding tillage. Summer fallow is an effective control for this weed, but mowing rather than tillage will lessen the risk of soil erosion. Annual crops cut for green feed allow for deep cultivation in spring and fall or can be cut before the main flush of weed seeds are set.

Shallow tillage to destroy emerging shoots and seedlings should be done prior to or at seeding. Seed the cereals 7.5 cm deep if post-seeding tillage is required. Do not seed other crops on infested land.

Repeated mowing of small patches of bladder campion in wastelands and perennial crops is laborious but effective.