Trending
You are at:Home»Herbs and Spices»Traditional uses and benefits of Blinding Tree 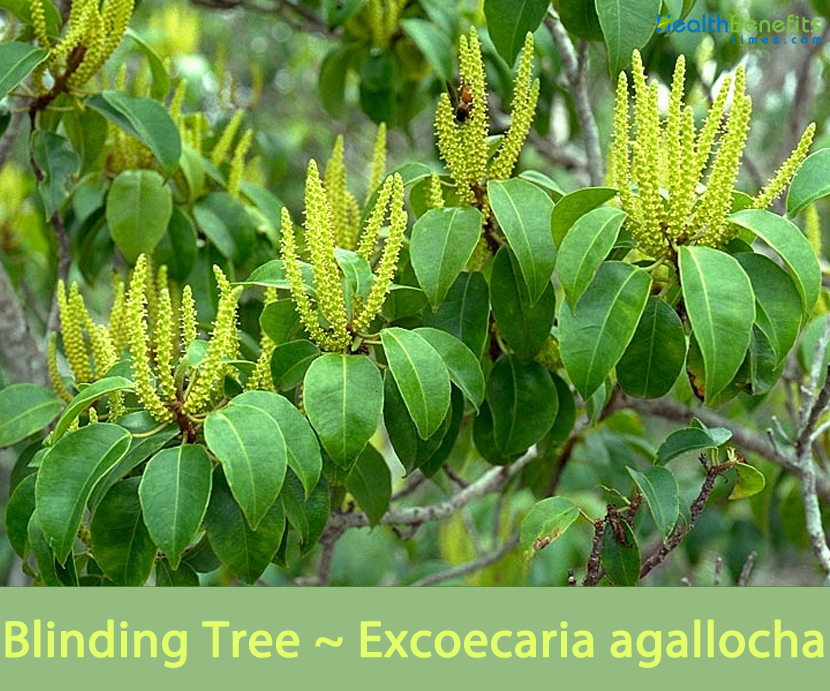 Most of the names refer to its toxic properties or its propensity to cause blindness when its latex comes into contact with the eyes. The plant is well-protected by chemical defenses; these include diterpenoids, triterpenoids and flavonoids. The milky latex of Excoecaria agallocha is very poisonous and powerfully irritant, which is not unusual in milky species of plant in the family Euphorbiaceae. Contact with skin causes irritation and rapid blistering; slight contact with eyes can cause temporary blindness, hence the common names that refer to blindness. Even the generic name is from the Latin for “blinder”.

Blinding Tree is much-branched small tree that normally grows up to 15 m high. The plant has shallow, surface-running roots that are often knotted and are covered with lenticels. Its bark is greyish-brown, warty, with vertical fissures and lenticels. The plant exudes white latex from any broken part. It is also deciduous, and usually sheds its leaves just before the onset of flowering. The plant is found growing in mangrove, tidal forest, cleared forest, brackish areas, and rice fields and on mud and sand. It grows in muddy and sandy habitats, often in areas with a high input of fresh water, or landward margins of mangrove forests. It occurs locally in all mangrove forests and in the vicinity of Kranji Reservoir.

Leaves are alternate, shiny, pointed at the top, somewhat rounded at the base, elliptic-ovate, oblong-ovate or ovate, and 6 to 12 centimeters long and 1.5 to 6 cm wide, and with 2–4 glands on each side of the base where the leaf blade joins the petiole (leaf stalk). It is spirally arranged, stalked, and have papery and slightly fleshy leaf blades with shallowly toothed-margins, green above, light green below. Young leaves are pink, old leaves turn yellow then red before dropping off. Leaves usually drop off after dry weather.

The Tree is dioecious, producing only male or female flowers on different individuals. The minute (less than 1mm) yellow flowers are borne on catkins at the axillary. Male flowers start as upright narrow cones when young and as they develop, elongate into longer spikes about 5-10 cm that eventually form drooping yellow tassels. Male flowers are said to be “very scented”. Female flowers appear in shorter spikes. They are much smaller, stalked, and arranged on catkins that are 0.5–3 cm long. According to Tomlinson the flowers are pollinated by insects as the pollen is sticky. Bees are common visitors and may be the chief pollinators. Flowering normally takes place in between October and February. 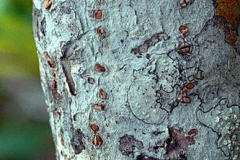 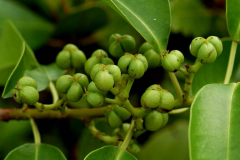 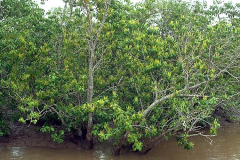 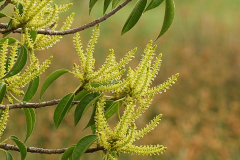 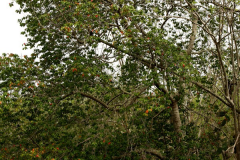 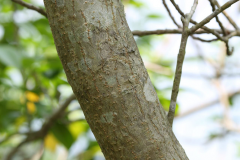 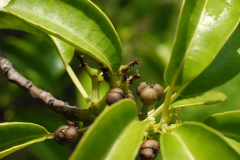 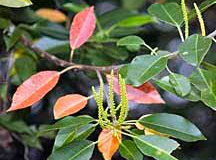 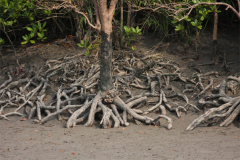 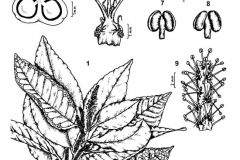 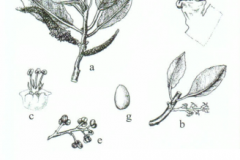 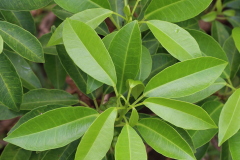 Fertile flowers are followed by small smooth capsular fruits that are almost round, 3-lobed, 4.5–5 mm long and 8–9 mm wide. The fruit is initially green turning to black as they ripen into dry capsules. Each capsule is made up of three portions, containing tiny dark to black seeds.