Trending
You are at:Home»Herbs and Spices»Health benefits of Blue Irish 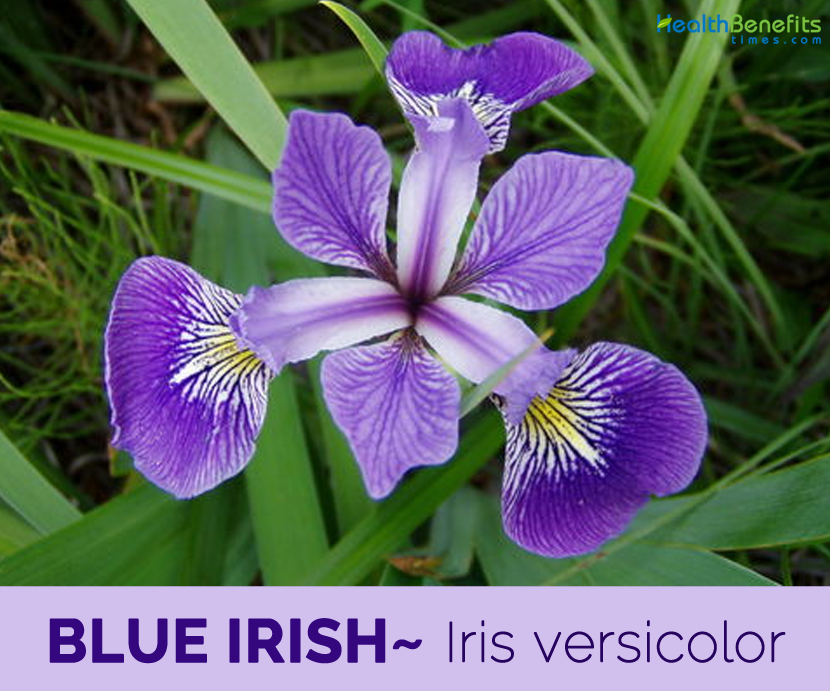 Iris Versicolor, also known as Blue Flag, has a number of other common names such as Poison Flag, Flag Lily, Liver Lily, Snake Lily, Dragon Flower, Dagger Flower, Water Flag, harlequin blue flag, larger blue flag, northern blue flag, purple iris, blue iris, Fleur-de-lis. Scientific synonyms include Iris boltoniana, Iris caurina, Iris dierinckii and Limniris versicolour. The plant is native to marshes, swamps, wet meadows, ditches and shorelines of North America, in the Eastern United States and Eastern Canada. It may be noted that blue flag is also called the liver lily since the dried up and pulverized rhizomes of the herb were predictably thought to be a wonderful medication for cleansing the contaminations of the blood as well as the different illnesses of the liver. The name ‘flag’ comes from the Middle English word ‘flagge’ which means reeds or rushes. The word ‘versicolor’ means ‘of many colors’. Some say the herb got its name from the Greek Goddess of the Rainbow. Others say that the early European settlers found the flower of this herb very similar to another European flower known as the Yellow Flag. Smitten by its beauty and similarity to the yellow flag, they gave it the ‘blue flag’ title

Blue Irish is an herbaceous perennial plant that grows about 10–80 centimeters high. It is found growing in marshes, swamps, wet meadows, along shorelines, forested wetlands, sedge meadows, marshes, and along stream banks and shores. The plant prefers sandy or loam-peat like soils. The plant has fibrous roots. Rootlets are long, slender and simple. Stem is straight, not much above the ground and usually possess basal leaves which are over 1 cm in width.

Leaves are mostly basal with 1 or 2 along the stem. The sword-like leaves are about 1 inch wide and 1 to 3 feet long, erect or arching out from the base, often purplish red at the base. Stem leaves rarely rise above the flowers. The flowering stems emerging from the base are smooth with a waxy surface (glaucous) and strong, remaining erect as the seed pods mature.

Flowers are a typical iris shape, 3 to 4 inches across, blue to blue-violet, infrequently red-purple and rarely pale blue. The deeper colored edges of the 3 large, drooping petal-like sepals fade toward the base, with a pale yellowish to greenish spot in the throat and prominent blue-purple veins radiating from it. The upper lip of the sepal is shorter and shaped like a shoehorn, curving up. Sepals are 1½ to 2¾ inches long and to 1½ inches wide. The 3 petals are lance-oblong and ½ to 2/3 the length of the sepals, drooping to spreading or erect in the center. There is 1 to a few flowers on a stalk.

The fruit is an oblong, 3 angled capsule containing two rows of densely packed seeds within each cell.  They are about 1-1/3 to 2¼ inches long and about 1/3 as wide. The seeds are large and brown with a flattened round shape. The herb is known as Snake lily as Native Indians used this herb to protect themselves from the bite of rattlesnakes. It was a general assumption that the aroma of this herb can prevent a rattlesnake attack. Many tribal members chew this herb and then safely hold a rattlesnake with their teeth.

Iris versicolor was an important medicine amongst the American Tribes. Considered to be a strong medicine, it was used by the Cree, Montaignais, Chippewa, Seneca, Meskwaki, Ojibwe, Potawatami, Mohawk, and Tete de Boule. Externally, it was used in swellings, bruises, burns, sores, inflammation, and blood poisoning resulting from bruises. Internally, it was used to treat colds, sore throats, lung troubles and as a drastic purgative/cathartic.

In 1749 the Colonials were using the drug to treat leg sores and other slow healing wounds. Raffinesque, writing in 1830 said that the drug was cathartic, diuretic, astringent, purgative, laxative, and pectoral. He lists syphilis, rabies, sore mouth ulcers, and wounds as effectively treated by the drug. When the medical establishment became enamored with bleeding, purging, burning, and leaching disease out of patients, Iris versicolor became popular. Today it is one of the popular herb around the world due to its several medicinal values.

The following are the health benefits of using Blue Flag:

Taking Blue Flag in very less amount can bring instant relief from vomiting and nausea. However, overdose of this herb can induce vomiting.

Native Indians from North America have used Blue Flag to treat skin related conditions like sores, burns, rheumatism, syphilis, acne, eczema and bruises. Many consider this herb to be one of the many cure-all types of herbal remedies available to tribal members.

Blue flag is known as Liver Lily due to the fact that the dried roots of the herb help in solving liver problems. There are some chemicals present in the herb that help in bile production and stimulating the functions of the liver.

Other Traditional uses and benefits of Blue Irish

Based on available scientific evidence, there is no proven safe or effective dose for blue flag. According to expert opinion, fresh rhizome should only be applied on the skin and never taken by mouth, as it may irritate the mouth and is much more likely to cause nausea and diarrhea. Various forms of blue flag have been used, including decoctions, dried rhizomes, fluid extracts, powdered roots, solid extracts and tinctures.

Based on accessible scientific evidence, there is no proven safe or effective dose for blue flag and this herb is not suggested in children.