Trending
You are at:Home»Herbs and Spices»Facts and Benefits of Yellow Dock 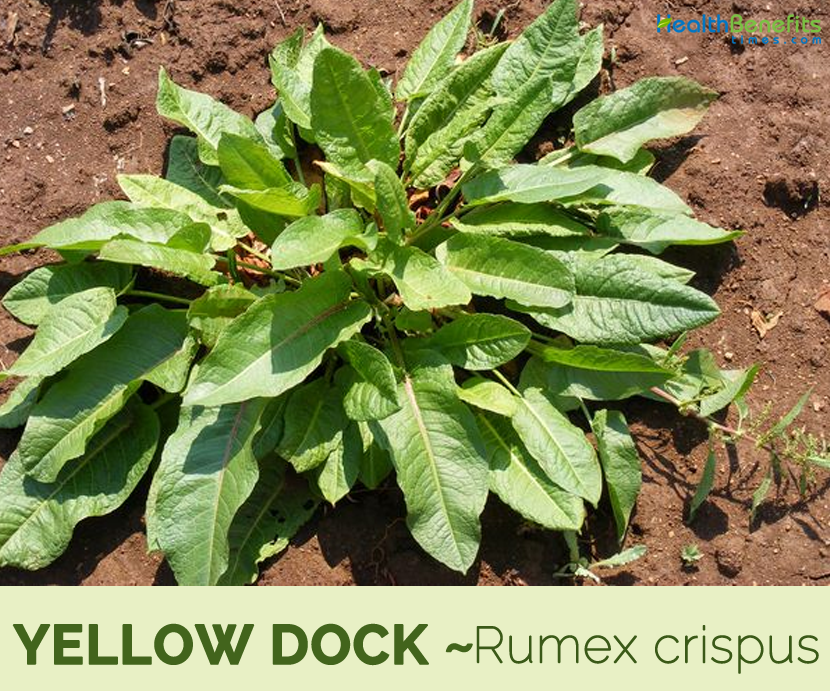 Yellow Dock scientifically known as Rumex crispus is a perennial herb belonging to the Polygonaceae family, commonly referred to as the knotweed family. This family also includes rhubarb, buckwheat, and sorrel. The name was given by Linnaeus and appears to be the only name used in modern literature. The genus name ‘Rumex’ refers to a noun meaning acid. The attribute ‘crispus’ means curled, which refers to the curly and wavy leaves of this species, as does the common name ‘curled dock’. Other common name of the plants are curly dock, curled dock, narrow dock, sour dock, rumex, yellow dock, Chin-ch’iao-mai, garden patience, parell and patience.  The yellow roots and rhizomes are used medicinally. Its common name refers to the yellow taproot rather than the flowers or leaves.

Yellow dock was one of the most respected medicinal plants in traditional herbal medicine dating back to the 1700’s. Yellow Dock is considered a tonic, a cleanser, a digestive herb, a laxative and a diuretic. As a tonic, the roots were taken to increase appetite and neutralize anemia and scurvy. Yellow Dock herb was mainly valued for just about all conditions and diseases affecting the skin including acne, psoriasis, leprosy, ringworm, herpes, eczema and dermatitis. Usually considered a problematic weed, it is most commonly found in open spaces where the soil is frequently disturbed such as fields, road sides, ditches, and dumps

Yellow Duck is a perennial flowering plant that grows about 40 to 120 cm tall, but plants over 150 cm may be found under favorable growth conditions. It is found growing in seeps, glades, weedy meadows (including areas prone to occasional flooding), pastures and fallow fields, vacant lots, roadside banks and gravelly areas along railroads, edges of yards and gardens, and miscellaneous waste areas. Disturbed areas are preferred. The plant grows on most types of soil. It occurs, however, less often on peat and acid soils and seems to be most competitive on fertile soils. It has large, yellow, forking taproot, up to 8 to 12 inches long, about 1/2 inch thick, fleshy and usually not forked. More or less branched and reaching a depth of 150 cm or more in soils that allow deep root penetration. Externally they are of a rusty brown and internally whitish, with fine, straight, medullary rays and a rather thick bark. Stem has 2-4 cm long, stiff, usually with a smooth, more or less reddish surface.

Leaves are bluish green with petioles shorter than the lamina. The upper leaves have no or very short petioles. Lamina is lanceolate, curly and wavy along their margins, 8 to 30 cm long and 2 to 7 cm wide. They have pointed tips and are narrowed at the base. The lamina of the lower leaves has more rounded bases than those of upper leaves on the stem.

Inflorescences are racemes, rather dense, mostly between 10 and 50 cm long, representing branches from the axils of upper leaves of the stem and the top shoot. Flowers, in dense clusters, are small with valves (inner sepals, sometimes known as tepals) that are 3-5 mm long and wide on pedicels which are 5-10 mm in length, green in the beginning and brown at maturity. Both bisexual and female flowers occur on the same plant. Fruit is achenes that are triangular in cross section, 2-3 mm long, 1.2-1.7 mm wide, with a shortly pointed base and a somewhat more long-pointed apex. The achenes, which have a shining reddish brown surface, are enclosed within three inner sepals (valves), which are heart-shaped with entire margins, first green, and brown at maturity. The seeds are more or less polymorphic, mainly differing in size. Yellow Dock herb was particularly appreciated for just about all conditions and diseases affecting the skin including acne, psoriasis, leprosy, ringworm, herpes, eczema and dermatitis.

Curly dock is a native of Europe, but today it occurs worldwide: above the Arctic Circle and on all continents. It is considered a weed in about 40 countries, making it one of the world’s most successful non-cultivated colonizing plants. Curly dock is a common but not necessarily serious weed in 16 crops including pastures, hay crops, small grains, orchards, lawns, and home gardens. It occurs throughout Ohio and surrounding states, and is commonly found along roadsides and waste areas where it tolerates poor drainage but favors nutrient rich soils.

Yellow dock is a fabulous herb for modern life. Not only does it support stage-2 detoxification of the liver – which most of us need because it’s not practical to live in a bubble – it also promotes healthy digestion, a diverse micro biome, and more. Yellow dock contains a unique combination of constituents such as anthraquinones, tannins, minerals, and inulin that together synergistically to support overall health.  Here are just some of the benefits:

Anemia is the condition in which the blood causes tiredness and also weakness in extreme level. Research has proved that yellow dock root can heal the anemia and it is known as the herb which can cleanse the blood and also strengthening the body. For those who want to try to heal anemia can take root of yellow dock and simmer it for making a tea.

4. Treat the Rheumatism and Arthritis

Yellow dock has been known for its rich source of vitamin A, manganese and also phosphorus which known as the effective medicine to treat fever and also suppressed the appetite. Yellow dock can be used as the daily drink in order to prevent fever.

Yellow dock consists of the methanol extracts which is useful for DNA and other protections inside body. It is also helpful to prevent free radical scavenging and also preventing enzymes of production in glucose. It shows that yellow dock root can be the anti-diabetics. Moreover research suggested yellow dock as the anticancer since it can protect the DNA and protein.

Anthraquinones contained in yellow dock helps to stimulate peristalsis of the intestines, which increases bowel transit time.  Generally, people tend to use harsh, addictive laxatives to address constipation.  Even naturally-occurring strong herbal laxatives can result in dependency and damage to the mucosal lining of the intestines. Because yellow dock has a smaller percentage of peristalsis stimulating ingredients, it can be used for a longer period of time with more gentle, yet still effective, benefits to digestive transit time.

Skin problems such as acne, psoriasis, age spots, rashes, eczema can be healed by yellow docks’ root. The process of treating acne is by soaking the cotton balls in it and applied in face or wherever the acne rises. Besides, yellow dock treatment can make a good smell while it is applied on face. It is also used as a daily cleaner for face.

Yellow dock’s leaves and root  can be used as tea to prevent and treat digestive problem while it is also able to reduce the alleviate stomach acid and heart-burn. It works properly by increasing the digestive enzymes and also stomach acids. Additionally the root and leaves of yellow dock can reduce the liver problems as mentioned above.

Research has demonstrated that yellow dock has a function to process out the excess hormones. It has been found as the effective way to reduce PMS and menopausal formulas. Yellow dock leaves and root can be made as tea or herbal drink to heal the PMS pain. For those women who suffering from PMS or other menstrual pain disorders, yellow dock tea can be the effective way to be consumed as daily herbal drink in order to heal the pain of menstruation.

Yellow dock is known as the metal element remedy which can reduce the throat sore and also guts. It is widely known as the effective herbal medicine for sore in throat and also coughs bronchitis and even laryngitis.

Yellow dock helps to treat the minor constipation, chronic skin problems and anemia. It also helps to detoxify the liver. It is also recognized as Rumex crispus or even curly dock. The plant has curly leaves which are long and upright stalks which are covered with reddish seed heads in the fall.

According to naturopathic doctor Sharol Tilgner, the yellow dock root tea is mainly used for non-spasmodic constipation. The small amounts of anthraquinone glycosides are mildly laxative which helps to increase the tone of the intestinal walls. The yellow dock tea helps to clear skin eruptions and assists the liver function. It is also known as blood purifier.

In 2001, the study which is published in “Journal of Agricultural and Food Chemistry” states that the tea of yellow dock leaves and seeds possess the antioxidant properties which helps to reduce the perioxide formation by 96 percent in the experimental model  which helps to indicate the free-radical scavenging in the body in high potential.

According to Tilgner, “Yellow dock tea helps to treat the anemia which is caused due to the iron deficiency and helps to absorb the iron.” When it is combined with the burdock root or horsetail along with blackstrap molasses then it helps to maintain the healthy iron level in the body. According to the University of Maryland Medical Center, yellow dock root can bring back the hemoglobin to the normal level if taken alone or with other herbs such as dandelion and alfalfa. According to UMMC, the dosage of yellow dock tea is 1 teaspoon of dried root should be simmered for 20 minutes in 1 cup of water.

Besides being beneficial, the overuse or prolonged use of yellow dock root may also cause certain side effects.

The usage of yellow dock root for the long time may lead to stomach cramps, diarrhea and intestinal obstructions. The laxative effect may be harmful to the pregnant or nursing mother. So it is not recommended for the young children and pregnant or nursing woman.

The continuous usage of yellow dock root causes the failure of kidney. The oxalic acid could bind the calcium in the body which leads to the kidney stone formation. The one who already suffer or is suffering from kidney stones should take it under the guidance of physician.

The usage of yellow dock root can result in the enormous loss of potassium levels in the form of excessive urination or loose bowels due to its laxative nature. It leads to the muscle weakness, irregular heart beat and low blood pressure.

Due to the laxative property in Yellow Dock root, it can interact with the drugs such as Warfarin, Water Pills and Digoxin. It may result in side effects so the one should avoid the yellow dock root while taking these drugs.