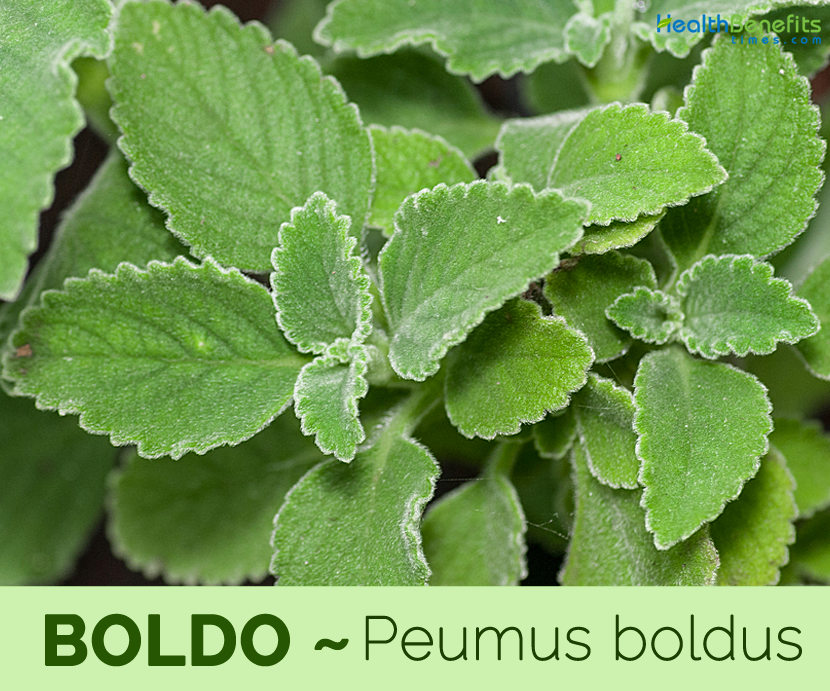 Peumus boldus, the only species in the genus Peumus, is commonly known as Boldo, boldus, boldoa, boldea, Boldu, Boldea fragrans, Boldine, Boldoak Boldea, Boldo Folium, Boldus, Boldus Boldus, Peumus boldus and Peumus fragrans. Aromatic, evergreen shrub or small tree belongs to family Monimiaceae and is native central Chile and Peru. Boldo has also been introduced to Europe and North Africa, though it is not often seen outside botanical gardens. It is also found in Mexico, Ecuador, Argentina, and Morocco, among other countries. The plant has sheets with a strong aroma which are used for culinary and medicinal purposes. The smell given off by the plant is similar to lemon and camphor, the parts that are used of the plant are the leaves, although in other countries used the bark of the plant.

Boldo is an aromatic, evergreen shrub or small tree that grows about 6-7m height (sometimes up to 20 m). It is found growing in well-drained acid sandy soil. Fertile, sandy soil is needed, and a good drainage is essential. It should not be planted in soil that is too moist. Leaves are opposite, sessile, about 2 inches long entire, and color when dried red brown, coriaceous, prominent midrib, a number of small glands on their surface. Odor is peculiar, when crushed very strongly disagreeable, not unlike oil of Chenopodium. Surface of leaves is rough since they are covered by glandular protuberances. The flat underside along with pronounced ribs.

Inflorescence is a cluster of 10-12 small flowers. Flowers are white or yellow, 1cm of diameter and very aromatic. Fruit is small fleshy drupe (1-2 cm in diameter), very aromatic and edible and is yellowish-green colored. Fruit consists of 5 mm spherical seed.

In its native area, where it is most often consumed as a tea, boldo has been traditionally used to treat hangovers, gout, stomachache, and urogenital inflammation. Initial research has revealed several promising medicinal uses for the plant in modern day. Listed below are some of the popular health benefits of using boldo

Boldo leaves were perhaps used in the earlier days as a supplement for digesting foods. Antioxidants present in these leaves activate the bile production in the liver and facilitate the breakdown of the nutrients. Antispasmodic quality of the Boldo leaf calms bowel cramps and also works as a moderate laxative, thus reducing mild symptoms of constipation. Extract of Boldo leaves is known to reduce the symptoms of stomach upset and is also used to boost appetite in adults and young people.

Boldo leaves are quite beneficial for liver. Tea prepared from the fresh twigs of the Boldo leaves energizes the release of digestive bile from the liver, which serves several essential functions. The main function of the bile is to facilitate removal of wastes and toxins from the body through the liver before they keep on piling and causing harm to the body.

Several researches have proved that Boldo tea helps safeguard the cells of the liver from the damage by the accumulated toxins in addition to confining the free radical cell damage. Anti-inflammatory abilities of Boldo tea also decrease liver inflammation, facilitating better healing and functioning of the organ.

Boldo tea supports the body’s immune system in several ways. Leaves consist of different types of natural anti-microbial and anti-bacterial agents which help in improving the defense mechanism of the body by decreasing the existence of infection causing agents.

Its anti-inflammatory abilities help to relieve excessive inflammation in any part of the body, further improving the body’s defense mechanisms against the inflammation causing pathogens. The antioxidants restrict the cell damage from the free radicals to a minimum and thus, make it less prone to infections.

Volatile oil in boldo leaves also consists of p-Cymene, a laxative agent. Hence, taking the boldo leaf or its extracts may help relieve habitual straining with bowel movement. In fact, European Scientific Cooperative on Phyto therapy (ESCOP) has given permission to use Boldo as an adjuvant agent to constipation treatment.

Boldo leaves are said to display antipyretic activity, which may help to suppress fever. So, drinking boldo leaf tea may be effective in alleviating fever.

Boldo leaves are rich in phytochemicals including limonene, camphor, boldine, coumarin and beta-pinene. These phytochemicals provide the body the capacity to fight free radicals and prevent the onset of several infections and diseases. These naturally occurring compounds reduce damage to the DNA and cells.

8. Exhibit Antimicrobial Properties
Boldo leaves are said to have strong antibacterial and antiseptic properties. So, drinking the boldo leaf tea can make the immune system resistant to a number of infectious agents. Due to their antibacterial properties, boldo leaves can be used to treat syphilis and gonorrhea, as these sexually transmitted infections are bacterial in nature.

Taking the boldo leaf tea is a natural way to treat UTIs. The use of boldo leaves for UTI dates back to the Inca civilization. Its purported antimicrobial activity works to get rid of infectious agents, thus restoring and maintaining urinary tract health.

One of the purported health benefits of boldo leaf tea is its ability to get rid of intestinal parasites due to the presence of volatile oil in the leaf. Volatile oil content accounts for 2 to 4% of the leaf. This volatile oil consists of 16 to 38% of ascaridole, an organic compound that is supposed to have anthelmintic (anti-parasitic) properties.

Other Traditional uses and benefits of Boldo

Ways to use Boldo