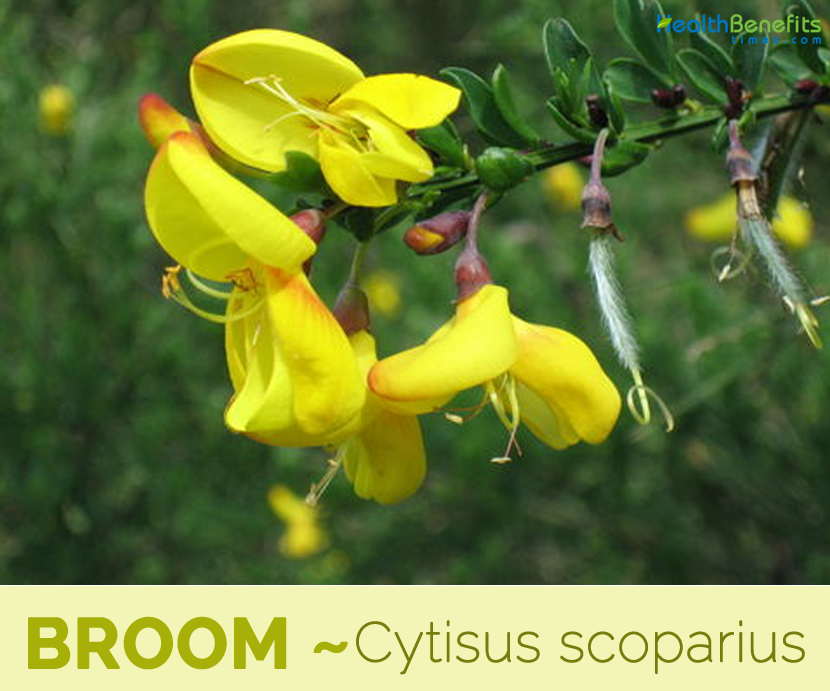 Broom scientifically known as Cytisus scoparius is a multi-stemmed, deciduous/evergreen shrub that grows 6 to 12 feet (2-4 m) tall.  Apart from broom it is also known as Scotch Broom, Broomtops, Common Broom, European Broom, Irish Broom, Genista, Besom, Scoparium, Irish Tops, Basam, Bizzom, Browme, Brum and Breeam.  The plant is native to central and southern Europe from the British Isles east to southern Scandinavia, south to Iberia, and east to Belarus and Romania. It is a species in the pea family Fabaceae. The plant was introduced as an ornamental shrub and for erosion control use.  In medieval Europe, the typical housewife used the twigs and branches of the scotch broom as domestic tool for sweeping the floors. A common belief in the middle Ages was that the scotch broom could repel witches; however, using the scotch broom while it was in full bloom was believed to invite bad luck on the house.

Broom is a multi-stemmed, deciduous/evergreen, erect and bushy shrub that grows about 6 to 12 feet (2-4 m) tall. They are found growing in disturbed areas, open forests, roadsides, grasslands, pastures, cultivated fields, wasteland, dry meadows, dry riverbeds and other waterways, sandy pastures and often near the coast. It prefers moderately fertile, dry to medium, well-drained soils. It can also tolerates poor rocky soils (good bank cover), but avoid wet soils. It has taproot that may exceed 2 feet in length with large, shallow lateral roots. Stem is hairy when young and glabrous as they mature. Branches are numerous long, straight, slender bright green branches, tough and very flexible, smooth and prominently angled.

The broom plants form deep, branched taproots with fine roots associated with nitrogen fixation. New shoots can grow from the crown when plants are cut above the crown.

Leaves of broom are alternate and compound consisting of three oblong leaflets.  Very few leaves are present on stems. New twigs may only have one leaflet. Leaflets are small approximately 0.3 to 0.7 inch (5-20 mm) long and 1.5 to 8 mm wide.  The leaflets are dark green and fleshy and serrated along their margin.  The underside of the leaflets is covered by flattened, short hairs while the upper surface is smooth.

Flowers are pea-like; upper and lower curved petal has wing petals on each side. Scotch broom flowers are yellow to partially to complete red in color. They are small, only 1-2.5 cm. The stamens are fused.  Plants flower from May to June.

Fruits develop as seed pods that mature in June-July. Seed pods are 2.5-7 cm long and 8-13 mm wide, smooth with long silky hairs. Pods are initially green which turn dark brown to black when mature. Seeds are small, 3-4 mm diameter long and shiny, brown to black in color with a whitish appendage which attracts ants and some birds.  Nearly 3-12 seeds are found within each pod.

Scotch broom originates from Europe. It was brought to North America as an ornamental garden plant in the 1800s. It also had other uses, including: a coffee alternative, medicinal uses, and a source of yellow dye. Since then it has managed to escape from many gardens and is a common invader on both the Pacific and Atlantic coasts. In PEI there have been a few sightings of scotch broom along roadsides and in ditches. However, most are contained in gardens.

There are two subspecies, which differ mainly in growth habit:

An erect shrub, growing to 2-3 meters (rarely 4 m) tall; shoots thinly hairy at first, soon becoming glabrous. This is the common form, occurring through most of the species range.

Prostrate, ground-hugging shrub, not exceeding half a meter in height; shoots densely silky-hairy. It is restricted to the Atlantic coasts of southern Ireland, west Wales, southwestern England, and northwestern France.

Traditional uses and benefits of broom

It is not clear what dose(s) of scotch broom are safe or effective for any medical condition, and use should only be under medical supervision. Storage of the flower or herb should be in a cool, dry location.

A juice has been made by pressing the bruised, fresh tops and adding one-third volume alcohol, allowing it to sit for seven days, followed by filtration, and taken daily as needed. An infusion has been made by adding 1 ounce of dried tops to a pint of boiling water (or 1 teaspoon in 200 milliliters boiling water) and taken as a cup-full once or twice daily as needed.

As a tea, 1-2 grams (1 level teaspoon) of herb can be steeped in 150-200 milliters of boiling water, then strained after 5-10 minutes and taken as a cup-full, up to three times daily as needed. As a decoction, 1-2 grams of herb have been used in preparations. As a liquid extract, a 1:1 preparation in 25% ethanol (v/v) has been prepared and taken as 1-2 milliliters as needed. As a tincture, a 1:5 preparation in 45% ethanol (v/v) has been taken at a dose of 0.5-2 milliliters daily. The herb may also be available as an aqueous-ethanol preparation (1:1:5) or as an aqueous essential oil extract.

Avoid due to potentially life-threatening toxicity.