Trending
You are at:Home»Herbs and Spices»Bottlebrushes facts and health benefits 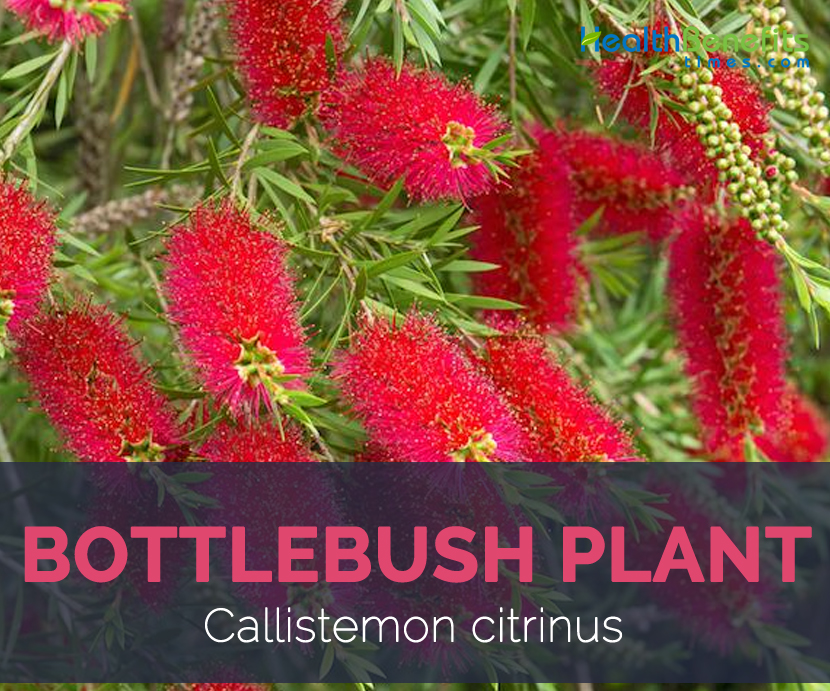 Bottle bush plant scientifically known as Melaleuca citrina, Callistemon citrinus get their name from the spikes of flowers that bloom at the ends of the stems, bearing a strong resemblance to a bottle brush. It is widely used as a landscaping plant due mostly to its adaptability; hardiness and the stunning flowers are a great attraction for native nectar feeding wild life including insects, butterflies and birds. Bottle bush belongs to the Callistemon genus in the Myrtaceae family that is closely related to the Melaleuca tree. The callistemon genus has nearly 40 species within it. The entire genus is endemic to Australia but widely cultivated in many other regions and naturalized in scattered locations. They are mostly found in the more temperate regions of Australia, particularly along the east coast and typically favor moist conditions so when planted in gardens thrive on regular watering. Apart from bottle bush it is also known as Crimson bottle-brush, Red bottle-brush or lemon bottlebrush.

Bottle bush plant is an Australian native evergreen shrub or a small tree ranges in size from 0.5 meter woody shrubs to 5 meter woody trees. They are mostly found in the more temperate regions of Australia, particularly along the east coast and typically favor moist conditions so when planted in gardens thrive on regular watering. They often grow in damp or wet conditions such as along creek beds or in areas which are prone to floods. However, two species are found in Tasmania and several others in the south-west of Western Australia. At least some species are drought-resistant and some are used in ornamental landscaping elsewhere in the world. The shrub thrives in clay, loam and sand soils that are moderately fertile, moist but well drained. Poor soil should be mixed with compost to improve drainage. Bark is grey in color with interlacing ridges with numerous, long, slender and drooping branches.

Bottle bush plant has sharp pointed, light green, narrow lanceolate leaves that are up to 3 to 7 cm long and 5 to 8 mm wide. The veins of the leaves are clearly visible on both sides.

Bottle bush plant has vibrant flowers that are cylindrical shaped, the color being produced by the filaments, at the end of these is where the pollen is formed adding to the natural beauty of the flower. The flower spikes are 6 to 10 cm in length and about 4 to 7 cm in diameter. Ranging from crimson reds, bright pinks oranges and yellows flowers in dense cylindrical spikes. The stamens are red, purplish-red, or lilac and the anthers are dark-colored. Flowering normally takes place from November through to the end of February.

Each flower produces small woody fruits that contain hundreds of tiny seeds. These fruits form in clusters along the stem, and are usually held on the plant for many years. The seeds are usually not released from the fruits for several years, but in some species the fruits open after about a year. The seed capsules, which appear in clusters along the stems, are woody, cup-shaped, and about 7 mm wide.

Native to Australia, bottlebrush trees and shrubs (Callistemon spp.) get their name from the flower spikes that form in spring or summer. There are currently 40 species in this genus. The bottlebrush is a woody shrub native to Australia. Most bottlebrushes occur in the east and south-east of Australia. Bottlebrush shrubs can be found growing from Australia’s tropical north to the temperate south. They often grow in damp or wet conditions such as along creek beds or in areas which are prone to floods.

The following bottlebrushes grow well in most temperate parts of Australia and have been successfully grown at the Gardens. 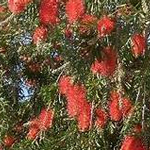 This prickly-leaved shrub grows best in well-drained soils in full sun and is an outstanding plant for hot, dry areas. The tips of the small red flower-spikes are covered in yellow pollen and are most attractive. The rounded shrubs grow to about 3 m. 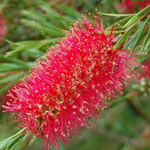 This hardy shrub is probably the best known bottlebrush and is widely cultivated. The bright red flower-spikes appear in summer and autumn. Crimson Bottlebrush grows well in wet conditions and usually reaches 4 m. Plants should be lightly pruned and fertilized after flowering. Neglected or misshapen plants respond to hard pruning. 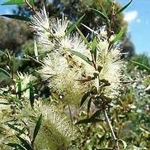 This attractive shrub is appropriate for tropical and frost-free areas. Plants grow to 3 m tall and have weeping branches. Lemon-colored flower spikes are produced throughout the year. It is planted as street tree in Kingaroy, Queensland. 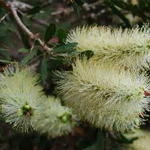 It is a tough, frost tolerant species which grows well in most soil conditions. Plants grow and flower best in full sun. The lemon-colored flower spikes are produced in summer. Plants grow to about 3 m. 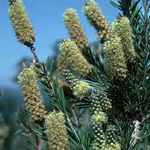 This very hardy and attractive bottlebrush is available in several forms. The alpine form is especially attractive and grows as a compact bush to about 1 m tall. Other forms grow as erect shrubs to about 2 m. Yellow flower spikes are produced in spring and summer. Plants grow best in moist soils. Alpine Bottlebrush can withstand heavy pruning if required. It is frost hardy. 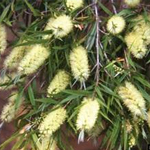 This small tree has attractive narrow foliage and white papery bark. It is drought resistant and quite hardy, although it can be affected by the frost in cold climates. The flower-spikes are generally white or greenish but pink, red and mauve forms can be found. An excellent garden and street tree which grows 5 to 12 m tall. 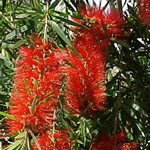 This compact shrub grows from 1 to 3 m tall and is able to tolerate quite wet conditions. Callistemon subulatus is a freely flowering plant which produces red flower spikes over summer. Light pruning after flowering will keep the shrub compact.

This large bottlebrush is widely cultivated. Plants produce bright red flower spikes which are very rich in nectar and attract many birds. Plants grow in a variety of soils, but can be frost tender, especially when young. Weeping Bottlebrush grows 5 to 7 m tall.

Bottlebrush plants (Callistemon spp.) get their name from the spikes of flowers that bloom at the ends of the stems, bearing a strong resemblance to a bottle brush. Grow them as shrubs or small trees that grow up to 15 feet. Most bottlebrush varieties bloom over a long summer season in shades of red or crimson. One exception is C. sieberi, which has light yellow flower spikes. Bottlebrush plants need a very mild climate. If you live in an area cooler than USDA plant hardiness zones 8b through 11, grow bottlebrush in pots that you can move to a protected area for winter. Use a rich, peaty potting soil with a few handfuls of sand added to improve the drainage. If pruned hard every year, the plants will grow in pots as small as 6 to 8 inches in diameter. If you plan to let the shrub grow, you’ll need a large tub.