Trending
You are at:Home»Herbs and Spices»Traditional uses and benefits of Box Elder 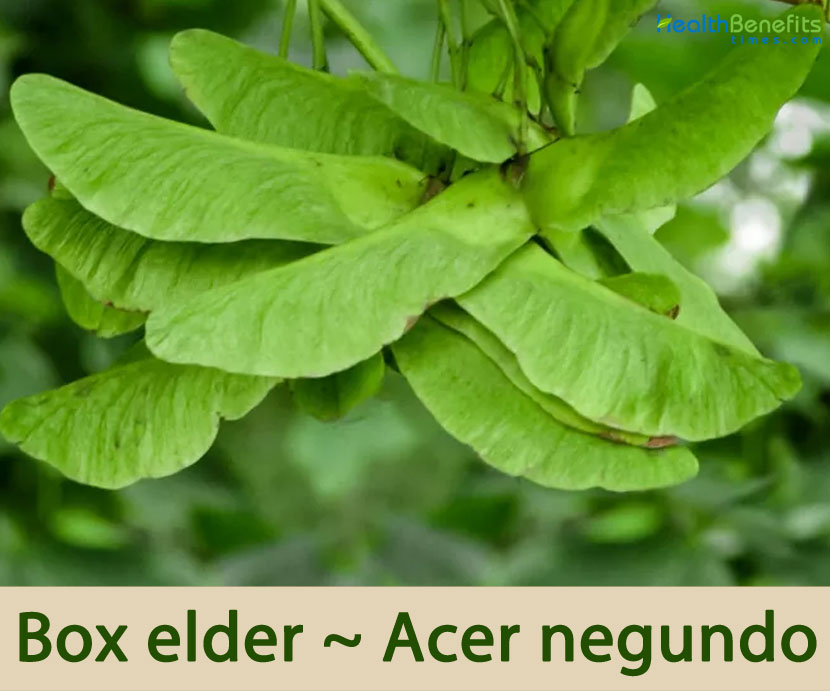 Acer negundo, commonly known as box elder, boxelder maple, Manitoba maple or ash-leaved maple, is a species of maple belonging to Aceraceae (Maple family). The plant is native to large parts of North America, from southern Canada through to Guatemala, including large parts of the USA and some parts of Mexico. Six distinct varieties and/or sub-species of box elder (Acer negundo) have been identified in the wild in North America. It has been introduced to and naturalized throughout much of the world, including in South America, Australia, New Zealand, South Africa, much of Europe, and parts of Asia. Some of the popular common names of the plant include Manitoba maple, ash-leaf maple, cut-leaved maple, three-leaf maple, ash maple, sugar maple, negundo maple, river maple, Box elder, box elder maple, ash-leaved maple, maple ash, elf maple, black maple, three-leaved maple, California boxelder and Western box elder.

Genus name is the Latin name for a maple tree. Specific epithet comes from the Sanskrit and Bengali word nirgundi, which was used as negundo in the naming of Vitex negundo and later for this maple that has a leaf similar to that of Vitex negundo. The name box elder (sometimes boxelder) is in reference to a use of the wood for making crates and boxes and the supposed similarity of the leaves to those of elder (Sambucus). Leaves also resemble those of some ashes, hence the additional common name of ash-leaved maple. The names box elder and boxelder maple are based upon the similarity of its whitish wood to that of boxwood and the similarity of its pinnately compound leaves to those of some species of elder. The plant is occasionally considered a weedy or invasive species, and has been introduced to and naturalized throughout much of the world, including in South America, Australia, New Zealand, South Africa, much of Europe, and parts of Asia.

The plant usually develops a shallow, fibrous root system. On deep soils it may form a short taproot with strong laterals. Shoot are green, often with a whitish to pink or violet waxy coating when young. Twigs are stout, light green to purplish or brownish with a polished look or are often covered with a whitish bloom that is easily rubbed off. Bark is smooth and green when young, become pale gray to light brown and separating into long thin ridges with shallow grooves with age.

Mature trunks have brownish-grey coloured bark that is rough and shallowly fissured. The younger branches are relatively smooth, hairless (i.e. glabrous) and somewhat shiny when they are young, but the developing bark becomes flaky in appearance on older branches. The youngest branches are rounded and green or purplish in color. They are often initially covered in a whitish waxy or powdery coating that gives them a slightly bluish-green appearance (i.e. they are somewhat pruinose or glaucous). Dormant growing buds (2-5 mm long) are present at the tips of the stems during winter, and these usually have one or two pairs of scales that are covered in tiny whitish-coloured hairs.

The relatively large leaves about 15-38 cm long are oppositely arranged along the stems and are made up of 3-9 leaflets (i.e. they are pinnate). These leaves are borne on a stalk (i.e. petiole) 5-12 cm long and each leaflet has its own smaller stalk (i.e. petiolule). The leaflets are roughly oval or elongated in shape (i.e. ovate, elliptic or lanceolate) with margins that are irregularly or regularly toothed (i.e. crenate or serrate) and may, or may not, also be shallowly lobed. The side (i.e. lateral) leaflets are 4-12 cm long and 2-4.5 cm wide, while the end (i.e. terminal) leaflet is usually significantly larger in size (up to 15 cm long and 8 cm wide) with a longer stalk (i.e. petiolule). These leaflets are usually entirely bright green in color, although sometimes they may have whitish-coloured blotches or margins (i.e. they may be variegated). Leaflets change color as they age and eventually turn dull yellow or brownish before being shed during autumn and winter. The undersides of the leaflets are paler in color, have prominent veins, and sometimes have a scattered covering of hairs that are more prominent along the veins.

Flowers appear just before, or with, the first leaves each spring, and are borne in the leaf forks (i.e. axils). Separate male and female (i.e. unisexual) flowers are usually borne on separate plants (i.e. this species is dioecious). Male and female flowers are both green and yellowish-green in color and lack any petals. They both have five tiny green sepals (about 1 mm long) and are arranged in drooping clusters (i.e. racemes) 2-15 cm long. The male flowers are borne on very slender drooping stalks (i.e. pedicels) 2-7 cm long and usually has five prominent stamens. The female flowers are borne on shorter and thicker stalks (up to 4 cm long). Flowering occurs during spring (i.e. from September to November).

Fertile flowers are followed by distinctive v-shaped fruit that is 3-4 cm long and are borne in drooping clusters and each fruit consists of two one-seeded structures that are prominently winged (i.e. a special type of mericarp called a samara). They are joined together near the base to form a ‘double samara’. The seed compartment at the base of these structures is somewhat oval (i.e. ellipsoid) in shape and about 15 mm long, while the wings are prominently veined. Immature fruit are green in color but turn yellowish and then pale brown as they mature. Mature fruit tend to remain on the female trees throughout summer and autumn, and even into the winter. The paired samaras usually eventually separate after they are shed. The seeds themselves are strongly wrinkled. 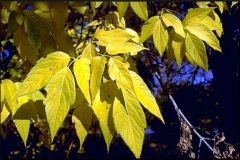 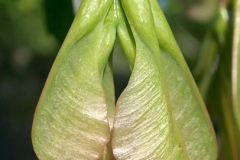 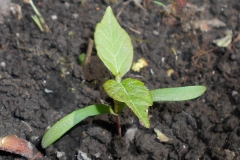 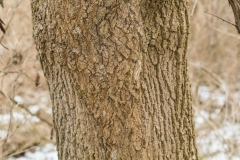 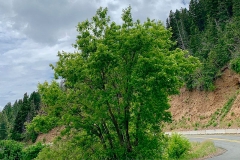 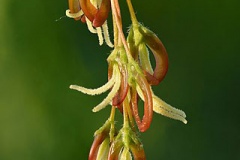 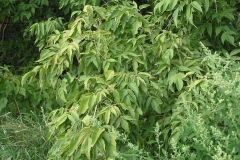 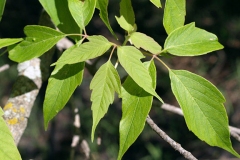 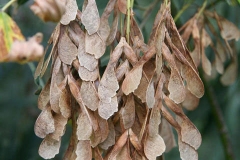 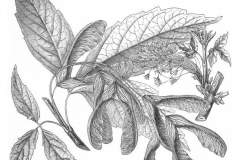 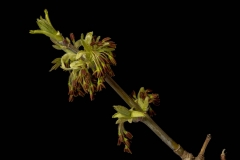 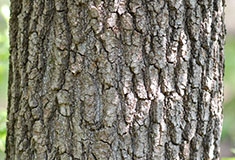 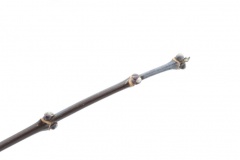 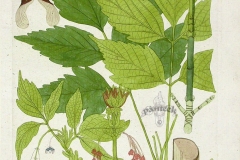 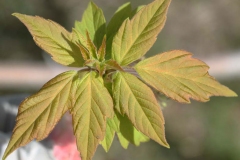