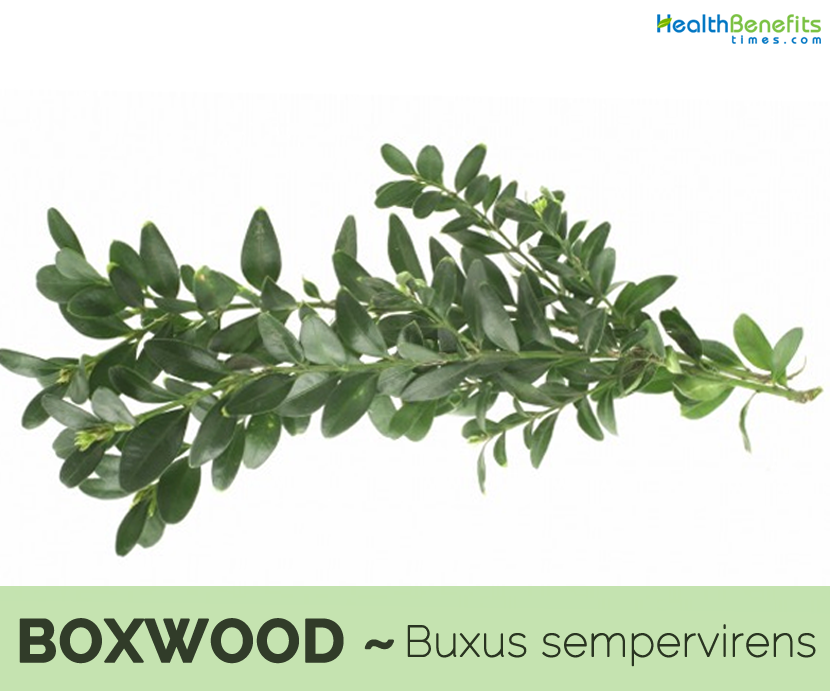 Boxwood scientifically known as Buxus sempervirens is a rounded to broad-rounded shrub or small tree that belongs to the family Buxacece, a very small family of only six genera and about thirty species, closely related to the Spurge family – Euphorbiaceae. Only this evergreen species has been utilized in medicine. Apart from boxwood it is also known as Caucasian boxwood, European box, French boxwood, Persian boxwood, Turkish boxwood, box, boxtree, boxwood, boxwoodtree, common box, common boxwood, English Boxwood. The plant is native to open woodlands and rocky hillsides in southern Europe, northern Africa and western Asia. It is the aristocrat of formal gardens. Dwarf varieties, known as English boxwood are extensively used as edging, hedges and foundation plants. The larger varieties, known as American boxwood, are used as screens, foundation and formal plantings.

Boxwood is a rounded to broad-rounded shrub or small tree that can grow to about 12 to 15 feet in height, rarely exceeding 20 feet when left undisturbed or uncut. Boxwood performs best in partial shade but will tolerate full sun. Soils must be well drained, organic, slightly acid to neutral pH and fertile. The plant has a dense root system, which forms a net of thin, yellow roots. Trunk is 6 inches in diameter covered with a rugged, yellowish-brown and wrinkled bark. Stem is crooked. Branches are erect to spreading, hoary pubescent when young.

Leaves are narrowly lanceolate or oblong-elliptic, 1.2-5.5 cm long, 0.5-1.2 cm broad, ovate, entire, smooth, thick, coriaceous and dark green.  Leaves are dark glossy green above and yellowish-green below. It has peculiar, rather disagreeable odor and bitter and somewhat astringent taste.

Boxwood plant consists of yellow-green, tiny flowers. It has a female flower in the center surrounded by several male flowers in the same inflorescence. Flowerings normally take place between April and May.