Trending
You are at:Home»Herbs and Spices»Know about the Bur Marigold 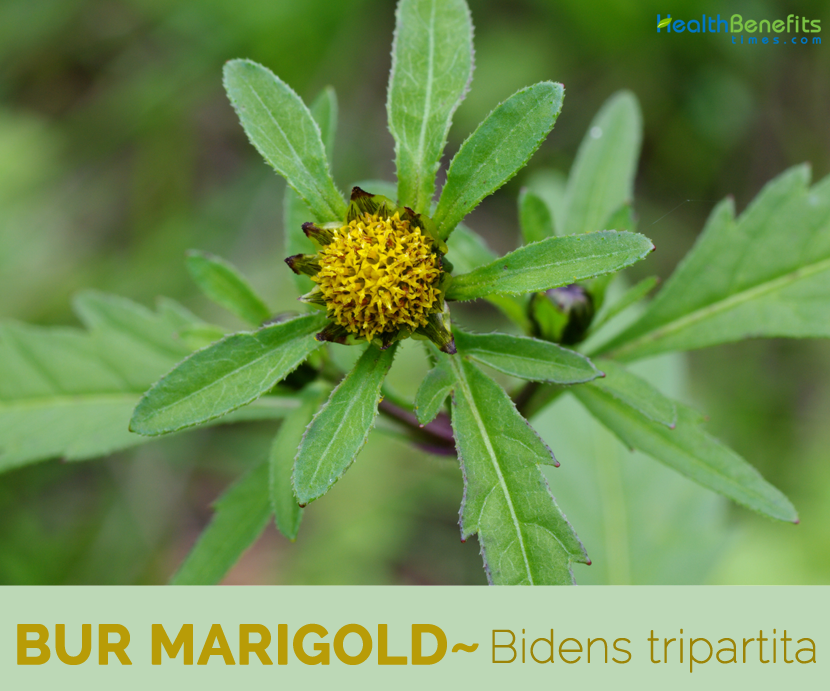 Bidens tripartita with many common names including Bur Marigold, three-lobe Beggarticks, Three-part Beggarticks, Leafy-bracted Beggarticks, Trifid Bur-marigold, water agrimony, tickseed, Bastard agrimony , bastard hemp , bur marigold , hairy beggar-ticks , 3-lobe beggar ticks , lumb , needle grass , Spanish needles , sticktights  and water hemp is a widespread annual plant native to large parts of the Northern hemisphere, including Europe, the Indian subcontinent, North America, temperate east Asia, and slightly into northern Africa. It has naturalized in other areas.  It is a flowering plant in the genus Bidens and is a member of the daisy family (Asteraceae). The plant’s genus name bidens is derives from Latin words “bis” meaning two and “dens” meaning teeth, referring to the two reflexed prickles located on the seed coats which allow the seeds to spread by adhering to human clothing or animal fur. Bidens tripartita was once known by the name Hipatorium due to the herb’s alleged invigorating effect on the liver.

Bur Marigold is an erect, much-branched annual plant that grows about 10-60 cm (4–25 inches) tall. The plant is found growing in wetlands such as beside rivers, swamps, streams and lakes, in wet pastures, as well as in peat or gravel excavations and ditches. It grows best in moist, preferably nitrogen-rich soil, and can be commonly found near lakes, swamps, rivers, streams, and ditches. Roots are tapering, with many fibers attached to it. Stem is reddish brown or pale green erect and branched that is wiry and nearly smooth, angular, solid and marked with small brown spots. The plant can be hairy or almost glabrous, and the size of the plant (especially the leaves) depends largely on the growing location.

Leaves are arranged alternately and are 2 to 4 inches long, ¾ to 1½ inches wide, opposite, simple, narrow to broad lance-elliptic, usually toothed, sometimes un-toothed, pointed at the tip, stalk less or tapering at the base to a (more or less) winged stalk. Occasionally a lower leaf may have one to a few lobes towards the base.

1 to 3 stalked flower heads at the end of branching stems and arising from leaf axils. The flower center is broad, ½ to ¾ inch across, made up of tiny dull light yellow disk flowers with 4 or 5 lobes. Ray flowers (petals) are uncommon, though 1 to 5 rays, often short and stubby, may be observed. Inner bracts are relatively inconspicuous. The head is surrounded, almost rosette-like, by 5 to 13 leafy outer bracts that are variable in size, ¼ to 2½ inches long, to 2/3 inch wide, broad lance-elliptic that are typically hairy near the base and may be sparsely hairy around the edges. Flowering normally takes place from July to October. Flower heads turn into round seed heads, covered in flat, dark brown seeds. Seeds are 1/3 to ½ inch long, usually with 3 barbed awns, the middle awn shorter than the side awns. The seeds usually germinate in 2 – 3 weeks depending on the local temperatures.