Trending
You are at:Home»Herbs and Spices»Facts about Callery Pear ~ Pyrus calleryana 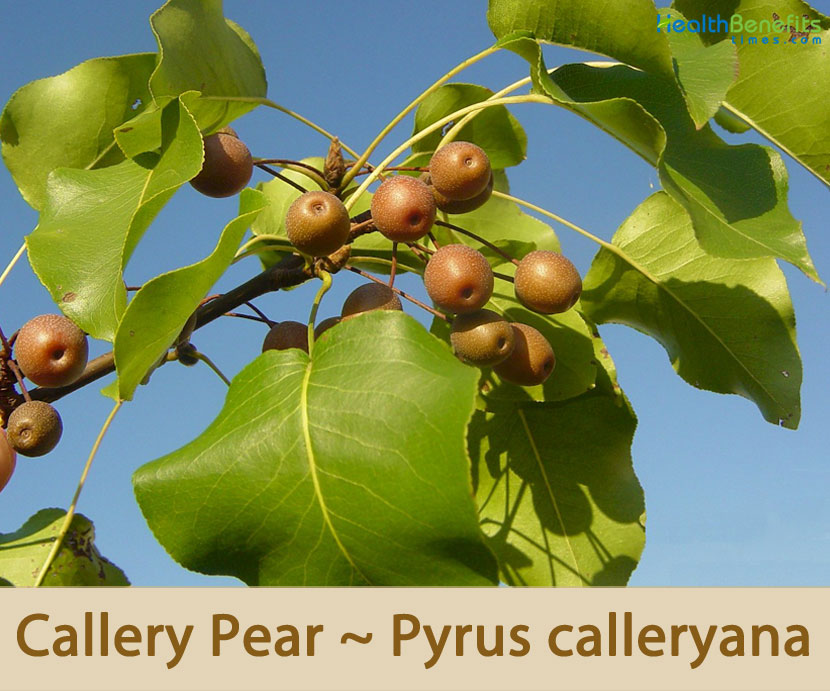 Pyrus calleryana, popularly called Callery pear is an upright-branched ornamental tree belonging to Rosaceae (Rose family). The plant is native to China South-Central, China Southeast, Vietnam, Taiwan, Japan and China North-Central. It is most commonly known for its cultivar ‘Bradford’, widely planted throughout the United States and increasingly regarded as an invasive species. Bradford pear and Callery pear are the most popular common names of Pyrus calleryana. The species is named after the Italian-French Sinologue Joseph-Marie Callery (1810–1862), a French missionary, who discovered and collected this plant in China in 1858 and sent specimens of the tree to Europe. Bradford has been widely planted since the 1950s in residential and commercial areas in many parts of the U.S. Notwithstanding its beautiful form; over time it has become apparent that Bradford has inherent and significant structural weaknesses.

Callery pears are remarkably resistant to disease or fire blight though some cultivars such as ‘Bradford’ are particularly susceptible to storm damage and are regularly disfigured or even killed by strong winds, ice storms, heavy snow, or limb loss due to their naturally rapid growth rate.

Callery pears are a medium-sized ornamental deciduous tree that normally grows about 60 ft. (18 m) in height and 2 ft. (0.6 m) in diameter. The crown shape is variable, depending on the cultivar, ranging from broadly ovate to pyramidal to columnar. The branches range from glabrous to sometimes densely pubescent. Terminal buds of the species are densely pubescent and much larger than those of other Pyrus species, often reaching 12-15 mm in length. The plant is found growing in slopes, plains, mixed valley forests, thickets, stream sides, woodland edges, bottomland forests, old field fencerows, roads, rights-of-ways, along the margins of understory along creek banks, degraded open woodlands, woodland borders and fallow fields.

Twigs initially hairy, stubby, and tipped by a sharp thorn in escaped plants, being longer branched with few thorns in cultured, planted varieties. Terminal and lateral bud scales loose, gray-hairy and elongated to 0.5 inch (1.2 cm). Twigs are thorn less in cultivated trees, but in wild types (including trees that develop from sprouts of a tree that was felled), the twigs end in thorns. Twigs are reddish-brown to grey with large, ovate, fuzzy terminal buds about 0.5 to 1.5 centimeters in length on branch tips and spur shoots. Bark is light brown to reddish-brown and smooth with lenticels in younger plant turning to greyish-brown with shallowly furrowed and scaly ridges with maturity. Stems and boles often spotted with gray and green lichens.

Leaves are alternate, often tufted on short branchlets. They are initially circular and hairy, maturing to glossy and ovate or slightly cordate with a tapering tip, 1.5 to 3.5 inches (4 to 9 cm) long and wide, leathery with finely crenate and wavy margins sometimes having a pronounced tip. Leaves are dark green above and light green below, becoming brilliantly red, yellow, to maroon in fall. Thin petioles 1 to 2 inches (2.5 to 5 cm) long with thin stipules that shed early. Leaf margins are toothed and the base of the leaf is rounded.

In summer, the shining foliage is dark green and very smooth, and in autumn the leaves commonly turn brilliant colors, ranging from yellow and orange to more commonly red, pink, purple, and bronze. However, since the color often develops very late in autumn, the leaves may be killed by a hard frost before full color can develop.

The plant produces large clusters of brilliantly white, 5-petaled flowers, 1 inch (2.5 cm) across with many jutting, maroon-tipped anthers, appearing before leaves, tufted often from mid thorn, covering trees to make conspicuous invaders in early spring. Flowers normally emit an unpleasant odor and can cause allergic sinus reactions. Flowering occurs early in the spring (April to May) before the leaves emerge.

Fertile flowers are followed by persistent clusters of small pears (pomes), 0.3 to 0.5 inch (8 to 12 mm) long and wide. The fruits are initially green ripening to tan then maroon with numerous surface speckles, dangling on thin, 1-inch (2.5 cm) long stems. They are fleshy, tart but edible, containing 2 to 6 maroon seeds and numerous stone cells. Fruits are hard, almost woody, until softened by frost, after which they are readily taken by birds, which disperse the seeds in their droppings. 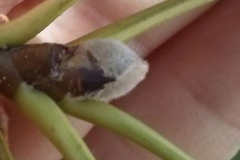 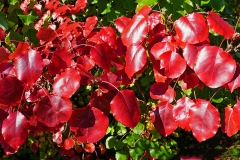 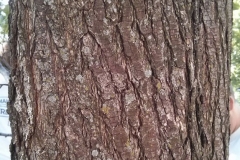 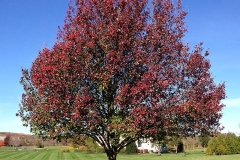 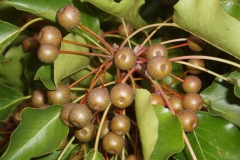 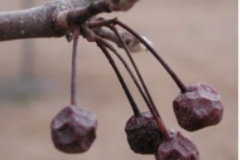 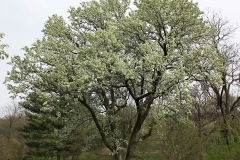 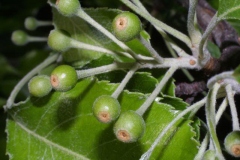 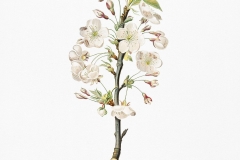 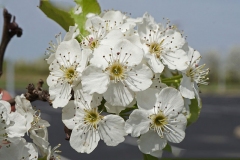 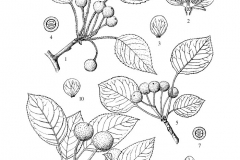 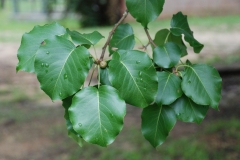 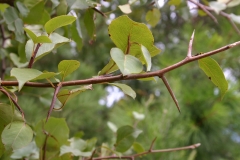 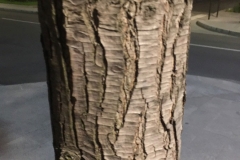 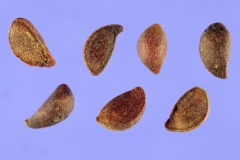 Preventative measures: Swearingen et al. recommend not planting Pyrus calleryana. The root stock of grafted plants can sprout and reproduce by crossing with the upper scion. Sucker growth should be promptly removed to prevent possible cross pollination with the scion.

Pull up seedlings by hand or with a gardening tool which helps capture the roots. Cut down trees and immediately treat entire surface area of cut stump with a systemic herbicide such as concentrated glyphosate or triclopyr, following all labeling instructions, to prevent resprouting. Adult trees can be girdled in spring or summer by cutting through the bark around the entire circumference of the tree at the base of the tree. Mowing is not effective because of likelihood of resprouting.

Treat entire surface area of any cut stumps immediately with a systemic herbicide such as concentrated glyphosate or triclopyr, following all labeling instructions, to prevent resprouting. To prevent fruiting of adult trees, spray with ethephon during full bloom; only 95% effective.