Trending
You are at:Home»Fruits»Camu Camu facts and health benefits 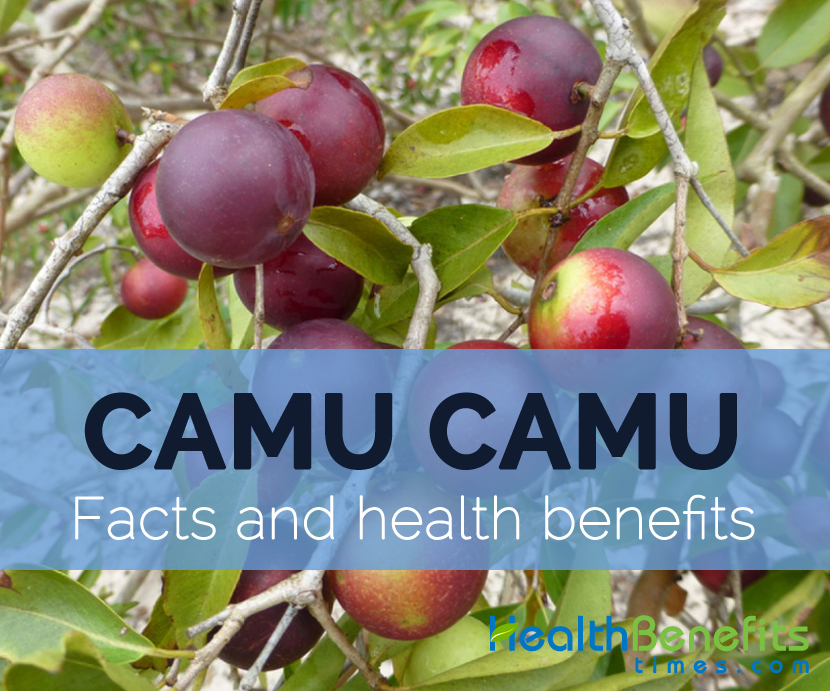 Camu Camu is a small berry fruit which is mostly found in the Amazon basin. The tree is also named the same. It is a close relative of guavaberry. The scientific name of Camu Camu is Myrciaria dubia.  It is native to South American Rainforest in Peru and Brazil but also commonly found in Columbia, Ecuador, Peru, Bolivia and Brazil. The fruit is also known by many other names such as Camu-Camu, Rumberry, Guavaberry, Cacari, Camu-Camu, and Zamu Camu Berry. Camu Camu has hosted other names such as Brazil: Camu-Camu, Arazá De Agua; Spanish: Camo Camo, Guapuro Blanco; Columbia: Guayabo and others.

It is a small shrub which is low growing in nature. The shrub grows upto 1 to 3 m in height and has pale-bronzy bark which is thin. The plant survives in hot, damp tropical climate. It prefers well-drained soils. The leaves are evergreen, ovate or elliptic and 5 cm to12 cm long and 2 cm to 4.5 cm wide. The flowers are white and fragrant. The stem is smooth. The tree yields flowers during dry season. The plant has various edible parts which acts as a medicine and treats the health ailments.

Camu Camu is the berry like fruit of the plants belonging to the Myrtaceae family and Myrciaria genus. It has got the shape of cherry. The fruit is a circular with diameter 1.0 to 3.2 cm. It contains two to three large seeds. It is sour in taste with tart flavor. The fruit is reddish-brown in color. At the times, the color also resembles purple-black. The flesh is whitish. The peel of the fruit is thin but shiny. The fruit season is during rainy season.

Camu Camu is highly rich in Vitamin C. It contains an antioxidant, astringent, emollient, anti-inflammatory and nutritional properties. Camu Camu is a very good source of manganese, zinc, copper and iron. It also possesses other nutrients and phytochemicals. It provides 56 times more Vitamin C than a lemon.

Camu Camu is not consumed as food due to its sourness in taste. The recent reports have marketed this fruit as a supplement of dietary for curing cancer and diabetes. It possesses an anti-inflammatory and antioxidant activities. Leaves also display pharmacological activity. But the research on human study is still needed.

Vitamin C vitalizes the production of white blood cells which enhances the immune system and produces collagen that repairs the tissues, cells and organs. It provides Vitamin C 200 times more per ounce than banana.

The amino acids and nutrients which are found in Camu Camu such as catechins, anthocyanins and flavonols act as anti-inflammatory substances. It relieves the pain and inflammation caused by the arthritis, gout, headaches and hemorrhoids. (1)

Camu Camu is loaded with antioxidants which provide the prevention from the cancers. It also prevents the growth as well as the spread of various types of cancers. The abundant amount of antioxidant is possessed in this fruit. (2)

The peel and seed possess the phenolic constituents. Peel and seed extracts has an antimicrobial properties. The antiseptic properties eliminate the viral and bacterial infections such as sexually transmitted diseases, herpes and E.coli. So it becomes an effective dietary supplement for all because the immune systems are affected by the external agents. (3)

Camu Camu protects the sexual organs by preventing infertility and also enhances the smooth functioning of these systems. (4)

Carotenoids act as an antioxidant and are able to protect the health of eyes. It eliminates the oxidative stress and also eliminates the macular degeneration and growth of cataracts. (5)

Though it possesses dietary fiber in fewer amounts, it enhances the digestive processes and balances the cholesterol levels which help to protect heart. The research has shown that the intake of low fiber content and high glycemic load increases the chances of diabetes. They suggest consuming the dietary fiber with minimally refined form which prevents from diabetes. (6)

The research shows that Vitamin C helps those who have weak immune system which is caused by stress. Stress is the common condition which is experienced by the people. So, one should consume the Vitamin C rich fruit (Camu Camu) which helps to maintain the overall health.

Adding Camu Camu to the diet helps to improve the muscle strength and physical performance. The food rich in Vitamin C improves the intake of oxygen during the exercises and also lowers the blood pressure. If Vitamin C is taken to the dose of 1000 to 2000 mg, it could reduce the production of histamines which lead to the inflammation in asthmatic patients. It also helps the symptoms of asthma. In 100 gm of Camu Camu, 2994 mg of Vitamin C is obtained which is 3000% of the Daily Recommended Value.

Minerals such as zinc, copper and calcium with manganese reduces the bone loss in the older women. The deficiency of manganese leads to the chances of bone related disorders. Manganese forms the bone regulatory enzymes and hormones which are involved in the bone metabolism. Camu Camu is loaded with copper, zinc, calcium and manganese which provide the strong and healthy bones.

People use the juice of the fruit to enhance the function of immune system, prevent stress, anxiety and viral infections. It also promotes healthy skin, gums, eyes, nails, heart and nervous system. It is used by the medicinal folk remedies to treat infections.

Camu Camu is consumed as food. It provides color to the juices due to the pigmentation of reddish color. It is also added to the ice-creams, sweets and candies. The stem and bark is used in the tea which provides relief from diabetes. Camu Camu could be also used in the form of jam, yogurt, nectar, juice, etc.

Camu Camu is rich in Vitamin C so its high intake leads to diarrhea and digestion problem. It also helps in the production of serotonin which causes lack of sleep, nausea, vomiting and loss of appetite, if consumed in excess amount. The excess Vitamin C leads to iron poisoning. The excessive use of Camu Camu increases the heart and metabolic activity. It may react with the chemotherapy drugs.