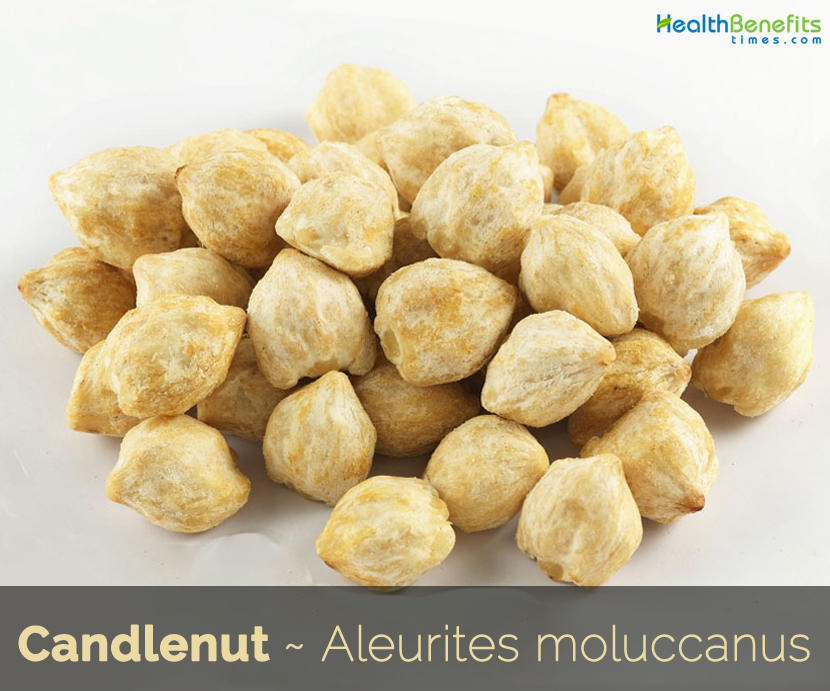 Candlenut (also known by Aleurites Moluccanus) is actually a flowering tree in the genus Aleurites belonging to the family Euphorbiaceae. The genus contains two species: A. moluccanus (L.) Willd and Aleurites rockinghamensis (Baill.) P.I.Forst. The plant is native to Indo-Malaysia region.  They are grown largely in the tropical and subtropical regions of the world such as Malaysia, Indonesia, Queensland as well as some parts of Australia. It is also commonly known as Indian walnut, Candleberry, Candlenut, Candlenut-tree, Kukui, Lumbangtree, Varnishtree, Bankul nut tree, Indonesian walnut, Kukui nut, Moluccan oil tree, Tallow tree, Buah Keras, Tung-nut, Otaheite walnut, Balucanat and Belgaum walnut. Genus name comes from the Greek word aleuron meaning floury in reference to the white flour-like dusting present on juvenile leaves. Specific epithet means from the Moluccas (aka Spice Islands) located in eastern Indonesia which is part of the native habitat for this tree.

Candlenut is a medium sized, perennial, evergreen, upper-canopy tree that grows about 10–47 m tall. The plant thrives best in a warm, humid tropical environment. It is common in wet secondary forest at the margins or along stream and along the seashore. It will also thrive in a semi dry to wet subtropical forest climate and in areas. Candlenut trees grow on a wide variety of soils which includes acidic soils, sandy soils, red loamy soils, limestone and stony clay soils. They are not fond of alkaline soils. However, they can tolerate soils which are neutral to slightly alkaline. The soil should be moist and well drained. These trees also have a good tolerance for infertile soils. The plant has straight and cylindrical bole and can be up to 70 – 150 cm in diameter. Bark is grey-brown to blackish colored.

The leaves are very distinctively shaped but also quite variable in gross morphology. Young leaves and leaves on lower branches are often three-lobed or five-lobed, while older leaves and those on higher branches tend to be a simpler triangular or oval shape. They are typically 10–20cm long with wavy margins, and are arranged alternately. Where the leaf stalk joins the blade of the leaf, there are a pair of glands that produce a sweet secretion. The petioles are almost 30 centimeters in length. The leaves have a pale green coloration.

Fruit is a round nut that is 4 to 6 centimeters in diameter. They have a hard shell covering which is green or brown in color. Inside the hard shell there is the whitish flesh or pulp. Single nuts grow on stout stalks. The nuts contain one or two seeds.

The soft, elliptical, cream-colored seeds are found inside the nut. The seed coats covering the seeds are very hard. The length of each seeds is around 2.5 centimeters. The seeds are filled with rich contents of inflammable oil that enables the seeds to burn as candles. The seed shells are white in color which turns black as they mature.

The tree is probably native to a vast region from India, Sri Lanka, and Southeast Asia to northern Australia. The exact origin of this tree is unknown because of its early spread by humans. The plant is often cultivated throughout tropical Asia and Oceania as an ornamental plant.

Candle nut tree has both medicinal as well as edible uses. They are quite popular due to their culinary uses. The high oil content in the nuts makes them suitable for edible uses. It is generally used to thicken Asian dishes. The oils may also be used as lamp oil to be used as a source of light. Listed below are few of the health benefits of candle nuts

Candlenuts are excellent sources of fiber, and that’s why their inclusion in the diet can be very beneficial for the GI tract. Regular use of these tree nuts can help facilitate the digestive process. Consuming them on a regular basis also helps promote regular bowel movement because the oils they contain serve as mild laxatives.

Traditional healers recommend candlenuts to individuals who are suffering from diarrhea because its fiber content can help in adding bulk to stools, therefore putting an end to diarrhea. Candlenuts also have antimicrobial properties, and it’s no secret that most cases of diarrhea are due to the ingestion of contaminated food and water. By the way, another traditional use of candlenuts is for the treatment of dysentery.

Fungal infections maybe not dangerous, but it will make sufferers uncomfortable and not confident. To relieve about it, you need put the candlenut’s oil to the part of your body with fungal infections. Do it regularly to make the results optimal.

One of the many nutrients in candlenuts is potassium, which is well-known for its ability to lower high blood pressure. The way potassium works is this: it causes the relaxation of the walls of the blood vessels, allowing the blood to flow more freely throughout your system. This helps save the heart from being overworked and becoming large.

Insomnia is some kind of sickness that makes you not sleep well. It is caused by depression, a lot of thinking, a fear of something. But with candlenut, you can overcome it. Because candlenut has melatonin that will make you relax and quick fall asleep. This is good for people with bad insomnia.

Sap in bark can benefits in health as treat of sprue. One thing that you need is sap from the bark of candlenut’s tree. To get the sap, you need to do this: ripped off the skin of bark and wait until the sap has shown up. After the sap has shown up, put it with cotton and gives some coconut milk. Now you have a herbal treat of sprue. Apply it on the part of your mouth that has sprue.

Constipation is always happen when someone usually less eats fibrous food. But don’t worry. One of the candlenut benefits is to solve about it. Take 1 piece of candlenut, 2 onions, 5 grams of pulasari, 10 grams of cinnamon, 30 grams of urang-aring leaves, half a teaspoon of salt, half a teaspoon of fennel, 800 cc of water. Blend all the ingredients (without 800 cc of water) until smooth. Second, boil all the ingredients with 800 cc of water. Boil it until volume at least 400 cc. Filter it and put it in the glass. Drink it twice a day, and drink as much as 200 cc per once drink.

Regular consumption of candlenuts helps save the joints from becoming achy and swollen due to regular wear and tear. Including candlenuts in the diet more often is also good for keeping the bones strong. According to nutrition experts, phosphorous, which can be found in candlenuts, is also vital for it.

Candlenuts contain heavy amounts of protein. It’s exactly for this reason why consuming them can help in building muscles.

Candlenuts are certainly ideal for people who are trying to lose weight due to the muscle-building protein that these tree nuts have — the bigger the muscles, the faster the metabolism. Additionally, protein is something that causes the body to burn lots of calories as it can be extra challenging for the GI tract to have it digested.

Itchy insect bites can be cured by candlenut. Take 2 pieces of candlenut and turmeric with size as big as pinkie fingers. Tools in use are baker, mortar and pestle. First, bake the ingredients. After that, mashed it up until smooth. Then put it on the part of your body that was itchy caused by insects bite.

Traditional uses and benefits of Candlenuts