Trending
You are at:Home»Oils»Canola oil facts and benefits 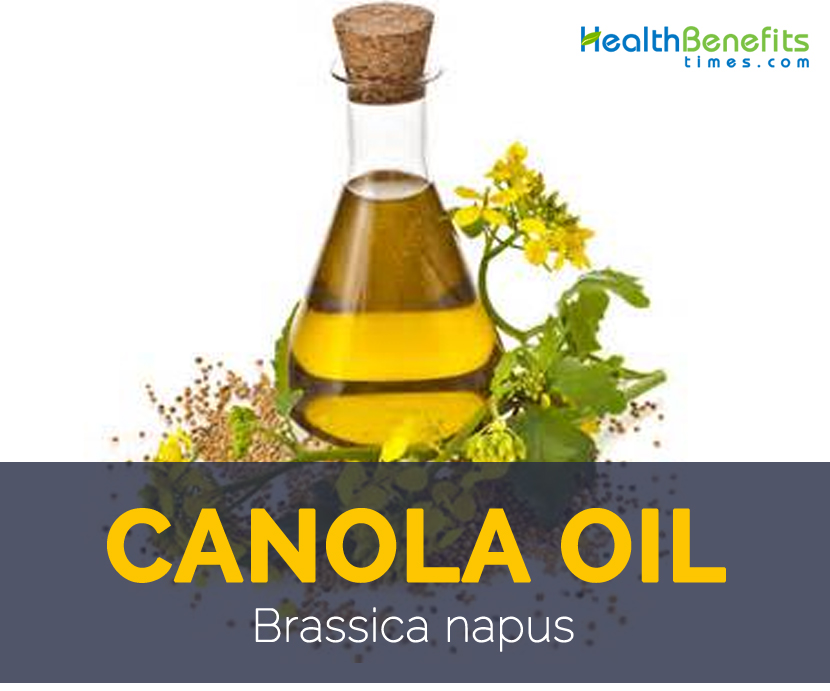 Canola scientifically known as Brassica napus belongs to the same genus of the crucifer family called Brassica; the large family of plants which also includes turnip, mustard, Brussels sprouts, cabbage, kale, cauliflower, broccoli …etc. Its name is a contraction of Canadian and ola (meaning oil). Apart from canola it is also known as Argentine Canola, Canola, Coleseed, Colza, Colza Rape, Oilseed Rape, Rapaseed, Rapeseed, Rappi, Summer Rape.  Besides the U.S., it is grown in Canada and Australia, but canola oil is consumed all over the world. In the U.S., the ratio of supply versus demand of canola oil is about 1:4, which presents a huge opportunity for U.S. producers to grow more canola. Since exact history of canola is unknown but is regarded to be in Mediterranean Europe.

Rapeseed oil is made from the rapeseed plant, specifically from the seeds of the rape or rapeseed plant, which is a member of the mustard (Brassicaceae) family. The seed is harvested from pods that are formed after those beautiful yellow flowers fade away. North American farmers have been growing canola seed for over 30 years. Canola oil is the healthiest of all commonly used cooking oils. It is lowest in saturated fat, high in cholesterol-lowering mono-unsaturated fat and the best source of omega-3 fats of all popular oils.

Fruit of canola is glabrous, linear, terete silique, 4.5–11 cm × 3–4 mm, with a tapering beak 1–3 cm long, ascending dehiscent, up to 30-seeded. It looks like a pea pod, but it is 5 times smaller. Seeds are globose, 1.5–2.5 mm in diameter, finely reticulate and are bluish black to dark brown colored. The seeds carry about 40% of oil. Canola oil comes from pressed canola seed. The seed is harvested from pods that are formed after those beautiful yellow flowers fade away. North American farmers have been growing canola seed for over 30 years.

The center of origin of Brassica napus is uncertain but is regarded to be in Mediterranean Europe. Evidence based on either chloroplast or nuclear markers has strongly suggested that B. napus is an amphiploid and appeared to have resulted from several independent hybridization events. Evidence suggested that most cultivated forms of B. napus were derived from a cross in which closely related ancestral species of B. rapa and B. oleracea was the maternal donor. But now because of its wonderful nutritional values and health promoting benefits it is grown and used throughout the world.

Apart from their neutral Taste, canola oil is a good source of nutrients, vitamins and minerals. Consuming 14 gram of canola oil offers 14 g of Total Fat, 2.44 mg of Vitamin E and 10 µg of Vitamin K.

Canola oil is produced from canola seeds. It includes variety of nutrition and has less erucic acid. This natural oil is used in different purposes from losing weight, improving health, until the beauty tips. Many people are using canola oil as a usual cooking oil as well as natural and safe ingredient hair care and skin care. In order to help people understand more about canola oil uses and effectiveness, we have decided to introduce top benefits of canola oil for hair, skin, and health. Keep reading the article and discover how amazing it is.

Canola oil contains absolutely no cholesterol, which is a major benefit for those people who have struggled with cholesterol issues in the past, as well as the conditions that naturally come with high cholesterol. Cholesterol can block your arteries and put excessive strain on your cardiovascular system. Cholesterol has been shown to be a major contributor to atherosclerosis, which can result in heart attacks and strokes.(1)

Canola oil consists of good amount of Omega-3 fatty acids and omega-6 fatty acids and those are often considered “good” and “bad” cholesterol, respectively. The body needs both, even though one is considered “unhealthy”. The ratio is 2:1, which is one of the healthiest ratios of any vegetable oil, even healthier than olive oil. Sterols are also found in rich supply in canola oil. The phytosterols that are found in canola oil can actually decrease the creation and absorption of cholesterol that you may get from other foods. Therefore, not only does canola oil contain no cholesterol, it can actually reduce your cholesterol levels by 10-15%.(2)

The low amount of cholesterol and the high amount of important antioxidants can help the body’s metabolism move at a normal rate. Your body doesn’t become sluggish and your energy isn’t sapped by slow circulation or an overstressed cardiovascular system.(3)

Monounsaturated fats not only help to prevent heart disease, but can also help to maintain glucose levels in the blood. This means that the chances of developing diabetes are far smaller, since glucose levels are kept in balance. The metabolism of the body keeps glucose and insulin levels in line, so even if you do suffer from diabetes, you are less likely to suffer from spikes and drops in blood sugar that are so dangerous to people with diabetes.(4)

Antioxidants, like vitamin E, are very effective against cancer. Free radicals cause healthy cells to mutate into cancerous cells, so having high levels of vitamin E in your diet, such as the content found in canola oil, can significantly reduce your chances of contracting cancer, and it is also a wonderful way to slow down the progression once cancer has presented itself.(5)

Canola oil, like many vegetable oils, is rich in vitamin E, which is an essential vitamin for the body for various reasons. Vitamin E is effective as an antioxidant, and is able to protect the skin from the damaging effects of free radicals. This helps to keep your skin supple and smooth, increase the healing rate of injuries, reduce the appearance of blemishes and acne marks, and slow down the appearance of wrinkles. Free radicals, which vitamin E can neutralize, are some of the most dangerous components in the body that affect the appearance of the skin, so canola oil is a logical choice if you want to look young and beautiful well into your old age.(7)

Vitamin E is also a lipid-soluble antioxidant, meaning that it can help protect the integrity of cell membranes throughout the body. Mucus membranes are important for protecting our body from foreign substances and form an important part of our immune system.(8)

Cognitive functions commonly appear as we get older, manifested in conditions like Alzheimer’s disease and dementia. The antioxidants that combat free radicals also prevent damage to the brain, which can shut down neural connections and lead to these dangerous conditions.(9)

You can add this value to your list of benefits of canola oil for hair. Canola oil is not only good for your skin, health, but it is also advantageous for your hair. This cheap oil can improve the quality of tresses. You can use warm canola oil to massage your tresses, use the plastic or shower to cover it for 20 minutes and then rinse off as usual with shampoo and warm water.

How to apply Canola Oil for hair care

There are many ways through you which you can apply them on hair. Here we will discuss about some of the most prominent methods.

Method 1: Blend equal amount of canola oil along with olive oil, preferably 2-3 spoons. Place them on a bowl and warm them up. Sock a piece of cotton on the bowl and paste the mixture onto the scalp and hair. Coating the hair ends with the oil as well as they are usually dry and need a lot of moisturizing. Continue massaging for 10-15 minutes and leave the hair untouched for 2-3 hours. Once the time has passed, you can wash it off.

Method 3: Canola oil is also used as an effective hair mask, which might appear strange but it is clinically proven to be effective.

Blend equal amount of canola oil along with mayonnaise. As discussed earlier, for good fragrance you can always add a few drop of lavender or primrose oil. Paste this mixture on to the hair and cover it (preferably with a shower cap). Leave it untouched for 2-3 hours and wash it off once it passes the time.

Method 4: Beer is a drink that is loved by everyone, but not many knows the impact it can have on improving the hair growth. In fact hair mask involving canola oil and beer will be great for tied tresses. For making this mixture, combine half cup of beer with a spoon of canola oil and egg. Paste this mixture onto the hair and leave it untouched for 10-15 minutes. Wash it off with cool water. You can also try storing beer in a spray bottle and sprinkle them onto your dry hair. For best results, make sure you follow this remedy on a routine basis.

Method 5: Essential oils are famous for carrying wide variety of features. They are helpful in solving issues related to hair, skin and health. Here is a method that you should try for treating your dry hair. Prepare 3 tablespoons of canola oil and mix them with some tablespoons of almond or olive or tea tree oil. Heat the mixture until it gets warm. Apply it onto your hair and cover it with a cotton cloth or a shower cap. Leave it untouched for 1-2 hours and wash it off with a shampoo.

Method 6: Canola oil can be mixed with banana for creating effective hair masks. Prepare the mix by adding a few drops of honey along with some tablespoons of canola oil and half piece of banana. Put all of them together in a mixer and blend them smooth. Now apply the paste onto your hair and cover it with a towel. Leave it untouched for 45 minutes. Wash it off with water. This method is found to be effective in moisturizing and supplying protein for hair growth.

Method 7: Canola oil contains very high amount of Erucic acid. They are high in protein content and are helpful for anyone who wants long hair. The best part about it is that even without mixing canola oil with other ingredients, you can get desired results.

How to Select and Store Canola Oil for External Use?

Ensure that you purchase Canola oil bottles in volumes that will last you at least two years. The container must be sealed tightly after each use to prevent exposure of the oil to atmospheric oxygen. If stored correctly, the shelf life of the oil increases. Store the oil in a cool and dark place to prevent exposure to light. On being exposed to light, Canola oil loses its nutritional value as the fatty acid components in the oil become oxidized. Users can wrap the container in aluminum foil or a dark cloth.

If the oil is stored properly, it can be safely used for about a year. Make sure you note the color and odor of the oil from time to time. Canola oil that changes color or gives off a foul smell has become rancid and needs to be discarded immediately to prevent any harm to the body.

Other Traditional uses and benefits of Canola oil

Brassica napus or rapeseed plant is a cool season small annual flowering herb with deep taproots. It grows to about 4-6 feet in height and bears golden-beautiful yellow flowers, which eventually develop into seedpods measuring about 5 cm in length. Each seedpod holds 20 to 35 tiny, round mustard-like seeds. The seeds carry about 40% of oil. Canola oil comes from pressed canola seed. The seed is harvested from pods that are formed after those beautiful yellow flowers fade away. North American farmers have been growing canola seed for over 30 years.