Trending
You are at:Home»Herbs and Spices»Cattail facts and health benefits 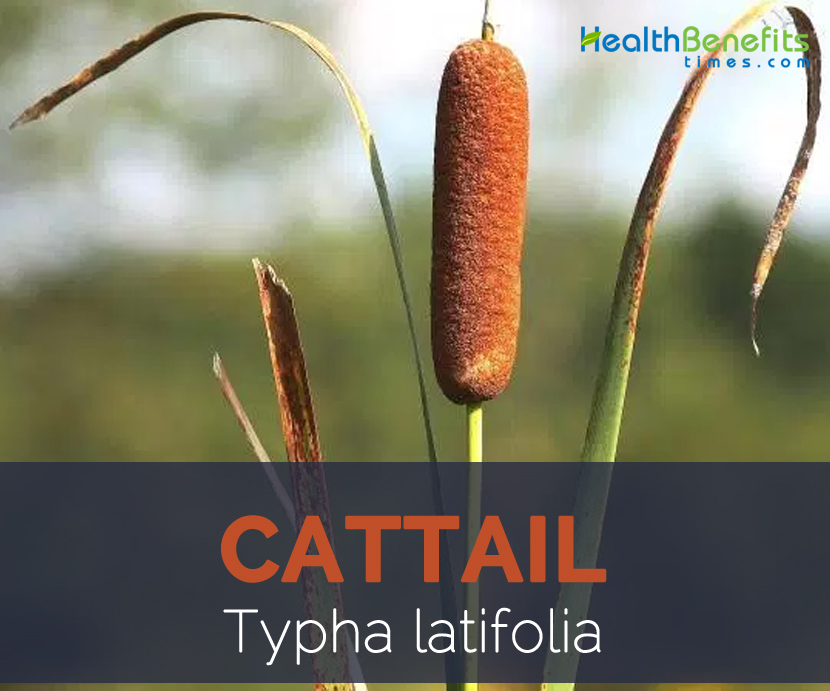 Typha latifolia also known as Cattail, Lesser Bulrush, Lesser Reed-Mace, Nail- Rod, Narrow-Leaf Cattail, Narrow leaf Cattail, Reed-Mace, Small Reed-Mace and Small Bulrush is actually a slender perennial aquatic emergent plant native throughout the temperate northern hemisphere. Although many of us probably have seen cattails growing on the edges of lakes and marshes and have never considered that it can be a very valuable addition to your diet, as it provides a wealth of unique nutrients and medicinal properties, many of which have been trusted on for hundreds of years. Though most people aren’t even mindful that this plant can be eaten, the rhizomes of the cattail can be consumed, as well as the leaf bases and the sheath. At different times in the growth period, every part of a cattail is eaten in certain way. However it is not recommended to eat the cattail you see, you can find certain cattail products, like flour, in specialty health stores in some parts of the world. It must be consumed cautiously.

Cattail is a slender perennial aquatic emergent plant, 1.5–2 m tall. It is found growing in shallow fresh water of lakes, rivers, ponds, marshes and ditches in valley marshes, coastal sites at low elevation. It has dense fibrous root with branched creeping rhizomes, 2–4 cm in diameter, commonly 70 cm or even longer, with dense fibrous root masses occurring at the base of stems and at rhizome nodes. Stems are unbranched and cylindrical, 100–200 cm, with long (60–100 cm), linear, narrow leaves, 5–10 mm wide and deep green. Leaves are basal, erect, linear, flat, D-shaped in cross section; 10 mm to 20 mm wide and 1 to 3 meters in length; 12-16 leaves arise from each vegetative shoot. Linear leaves are thick, ribbon-like structures and are pale grayish-green in color.

The spike-like, terminal, cylindric inflorescence has staminate flowers above and pistillate flowers below with a naked axis between the staminate and pistillate flowers. Flowering normally takes place from May to July depending, perhaps, on soil and water temperatures as influenced by climate and litter in a stand. Fruit are dry, dehiscent, ellipsoid follicle with long hairs containing large numbers of seeds. They are normally green during early summer and turn brown and fuzzy in the fall and following spring. They contain small pendulous seeds, with a straight, narrow embryo 0.2 millimeters (0.008 in) long, and attached to fine hairs.

T. latifolia is a cosmopolitan plant, occurring in wetlands through most temperature zones in North America, Europe and Asia, and many subtropical areas. It has also begun to invade the few regions where it is not native, like Oceania, South-East Asia and the Hawaiian islands. Due to its distinctive shape and size as well as growing habit it is found growing throughout the world with appropriate growing climate.

Cattail is one of the healthy and nutrients dense plants which are grown throughout the world. Some of the popular health benefits of consuming cattail are listed below in detail:

In case you are underweight and want to gain some weight, a mixture of Cattails rich diet together with a wholesome meal is the best method. Cattail being rich in carbohydrates and calories enables the weight gain process. Therefore it is one of the fruitful options for underweight people to gain required body weight.

Cattail consists of huge amount of nutrients and organic compounds which contributes to its effect on the skin, mainly its ability to heal boils, sores, and decrease the appearance of scars. Cattail jelly can be used topically for insect bites, but the flour also has anti-inflammatory potential that help to decrease the pain as well as severity of those affected areas.(1)

Adrenal glands are provided the appropriate support to decrease levels of stress by the content of protein and carbohydrates present in Cattail. It helps to improve the metabolism rate and thereby reduces stress.

Phytochemicals are required to streamline and maintain the absorption of insulin. A regular intake of Cattail can make your system combat diabetes mellitus, which is non-insulin dependent. So it is fruitful to consume cattail on a regular basis to combat diabetes.

However this area of research is comparatively new and somewhat controversial, research is ongoing regarding cattails ability to prevent cancer. Chinese researchers are heading up exciting new area of study, but early results are promising for its antioxidant effect on cancerous cells.(2)

LDL is decreased by intake of Cattail on account of the composition of Vitamin C, carotenoids and bioflavonoid. These elements make certain that the risks of cardiovascular diseases are reduced and the LDL is washed out of the system. Apart from that cholesterol absorption is also reduced. It means a reduced risk of developing atherosclerosis.

Cattail comprises of a certain composition of compounds, which help in decreasing the lipids in the body and even dilating the coronary artery. It is used in the treatment of heart diseases like angina, hyperlipidemia. Moreover, it is even used to dissolve stasis. It helps to reduce the deposition of lipids on the walls of the arteries. Hence, it prevents the incidence of heart diseases.

Cattail is popular due to its natural antiseptic property, which has come in handy for numerous cultures for generations. The jelly-like substances that you can find in between young leaves are used on wounds and other areas of the body where foreign agents, pathogens, or microbes might do damage in order to protect our system. This same jelly from the cattail plant is known as a powerful analgesic and can be ingested or applied topically to relieve pain and inflammation.(3)

As we all know that carbohydrates are a rich source of energy. Cattail consists of good amount of carbohydrate content. It means it has the ability to offer you greater levels of energy and even replenish energy levels if deficient from time to time. Since Cattail is made up of complex carbohydrates, the breakdown is rather slow, which means, you would have all the energy you need throughout the day.

Various parts of the cattail have coagulant properties, meaning that they slow down the flow of blood and prevent anemia. This can be effective if you’re wounded, but also if you suffer from heavy menstrual bleeding, since it can lessen the severity. But it is potentially dangerous for people who already have moderately slow circulation, as it efficiently slows down the blood, while simultaneously stimulating coagulant response in the skin.(4)

Other traditional uses and benefits of Cattail