Trending
You are at:Home»Vegetables»Mashua facts and health benefits 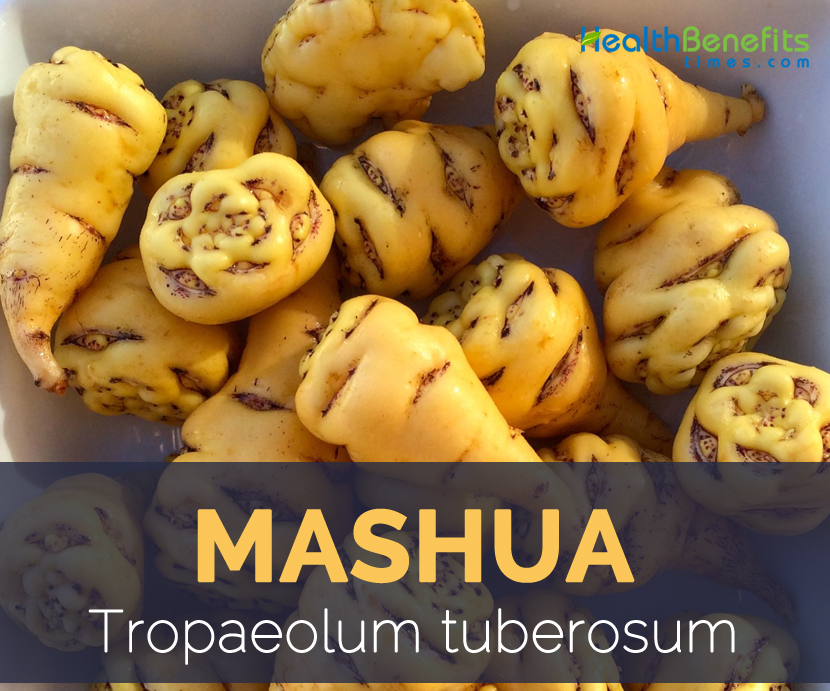 Tropaeolum tuberosum also known as mashua is a species of flowering plant in the family Tropaeolaceae, grown in the Andes, mainly in Peru and Bolivia, and to a lesser extent in Ecuador as well as in Boyacá Department, Colombia, for its edible tubers, which are consumed cooked or roasted as a vegetable. Anu, Anyu, Bulbous Nasturtium, Capucine, Edible Nasturtium, Mashua, Patagonian Capucine, Peruvian Capucine, Peruvian Nasturtium, Tuber Nasturtium, Tuberous Nasturtium, Tuberous Rooted Nasturtium are some of the popular common names of mashua. Apart from that Var. lineamaculatum and Var. piliferum are two of the most popular varieties of mashua plant which is grown throughout the world due to its distinctive features.

Mashua is an herbaceous erect (bushy) or prostrate climbing annual or perennial plant, 2–4 m (7–13 ft.) in height and is mostly found growing in dry environment with sufficient water. It can grow on a wide range of soils including marginal and rocky soils, but thrives best in fertile organic soils. Plant has adventitious root and thick slender, cylindrical, aerial, green or reddish-green, glabrous stems. Leaves are normally alternate, sub-orbicular, peltate, obtuse or rounded three- to five-lobed, glabrous, 4–6 cm by 5–7 cm, dark grey-green on the upper surface and pale green on the lower with marked purple venation. Normally plant features trumpet-shaped orange or orange and yellow flowers. Fruit is a schizocarp, dehiscing into three mericarps with ribbed and rugose surface each containing one seed.

Mashua plant produces tubers on axillary stolons that enlarge to form terminal, elongate, conical or ellipsoid tubers 5–15 cm long and 3–6 cm wide at the distal end, with shiny, waxy surface, which are somewhat roughened from enlarge scale leaves, usually deeply furrowed, each furrow containing a bud (‘eye) from which it produces aerial stem and adventitious roots. Tubers are normally white, yellow, red, pink or purple often striped or mottled red or purple, mainly beneath the eyes. It has yellow, white or pale lilac colored flesh depending on cultivars. Normally tuber has pungent aroma and has sharp, peppery taste reminiscent of hot radishes when consumed raw. Though cooking help to reduce its peppery taste. Due to its unique flavor and taste it can be used in several food items throughout the world.

Tropaeolum tuberosum actually originated from the central Andes Arbizu and Tapia during 1994. Its cultivation is supposed to have been spread by pre-Columbian migrations to Colombia and northern Argentina and Chile. Mashua is cultivated in the Andes of Bolivia, Peru, Ecuador, Columbia and Venezuela, northern Argentina and Chile. It is also being grown experimentally in New Zealand and the Pacific Northwest to evaluate its potential for worldwide cultivation. The tubers of T. tuberosum are an important source of food for around 9 million people living at elevations of 2500–4000 m throughout the Andes. Nowadays it is found growing almost everywhere around the world with suitable climatic conditions.

Apart from their sharp, peppery taste reminiscent of hot radishes, mashua is a good source of nutrients, vitamins and minerals. Consuming 100 gram of mashua offers 77.37 mg of Vitamin C, 9.7 g of Carbohydrate, 1.5 g of Protein, 0.8 g of Total dietary Fiber and 0.1 g of Total Fat (lipid).

Mashua is a delightful and wonderful vegetable which has higher nutritional values. Regular consumption in an appropriate amount is normally considered beneficial for all. Listed below are some of the popular health benefits of consuming mashua:

As we all know that frequent high consumption of fresh vegetables and a fruit is directly related to a minimized risk for various types of cancer. Research have shown that increased consumption of vitamin C is linked with a decreased possibility of cancers of the lungs, mouth, vocal chords, throat, colon, rectum, stomach, and esophagus. Mashua is also one of the best options to gain a sufficient amount of vitamin c as it consists of 77.37 mg of vitamin C which is actually 85.97% of the daily recommended value. So it is best to include mashua in your regular diet.

Carbohydrates are considered body’s main source of fuel. Mashua is one of the best sources of carbohydrate. When you take in food, body breaks down its sugars and starches and absorbs them into your bloodstream. At this point, they become glucose, or blood sugar. Body actually needs glucose to have the energy to do everything from breathing to weight training. Additionally our brain needs glucose to function appropriately. If you don’t take in enough carbohydrates, you will become weak, lethargic and unable to focus on even simple tasks.

Research has shown an inverse relationship between protein intake and risk of heart disease in adults, as higher protein diets seem to one of the natural remedies for high blood pressure. Apart from that, substituting carbohydrate foods along with protein results in lower LDL “bad” cholesterol and triglyceride levels. One reason this might be true is because higher protein diets balance blood sugar and tend to help prevent other heart disease-related causes, including obesity and diabetes. So protein rich food like mashua is normally recommended to remain safe from heart related problems.

A healthy dose of Vitamin C help to protects our body from infections and maintains healthy bones and teeth. It also improves our body’s ability to repair wounds and keeps us immune from bacteria, viruses and infection. Not only is it a well-known component of our immune system, it is also necessary for collagen, the main structural protein found in connective tissue. Vitamin C, when taken orally, helps wounds heal faster and better. Applied topically, it helps to protect the skin from free radical damage from the exposure to UV rays. As Mashua is one of the best choices for vitamin C including it in your regular diet is recommended to make our immunity strong.

Mashua is loaded with fiber which is actually essential for proper bowel movements. Carcinogens which are found in the intestine help to bind to the fiber, creating bulk to the stool, which keeps waste moving appropriately through the digestive tract. By including fiber into the daily diet, constipation may be prevented in addition to hemorrhoids. Without leaving residue as waste passes through the intestine, the flow of fiber helps to lessen the risk of colon cancer, as well as regulating bowel movements.

Fat contained in mashua is critical for better reproductive health in both men and women because it’s used to manufacture hormones and improves gene signaling that regulates hormone balance.

For women, not consuming sufficient fat is a common cause of infertility, while eating the wrong fats also increases complications from PMS and menopause. For men, lack of good fats decreases testosterone as well as other androgen hormones that are essential for reproductive health.

Mashua is one of the more difficult of the Andean root crops to store. It dehydrates comparatively quickly once dug. Tubers will last 6 to 8 weeks at room temperature and moderate humidity before the reduction in quality makes them unappealing for eating. Storage conditions of 35-38 F and 95% humidity can extend storage to 8 months, allowing for some deterioration. Tubers exposed to light will become green, but this does not affect edibility.

Other traditional uses and benefits of Mashua