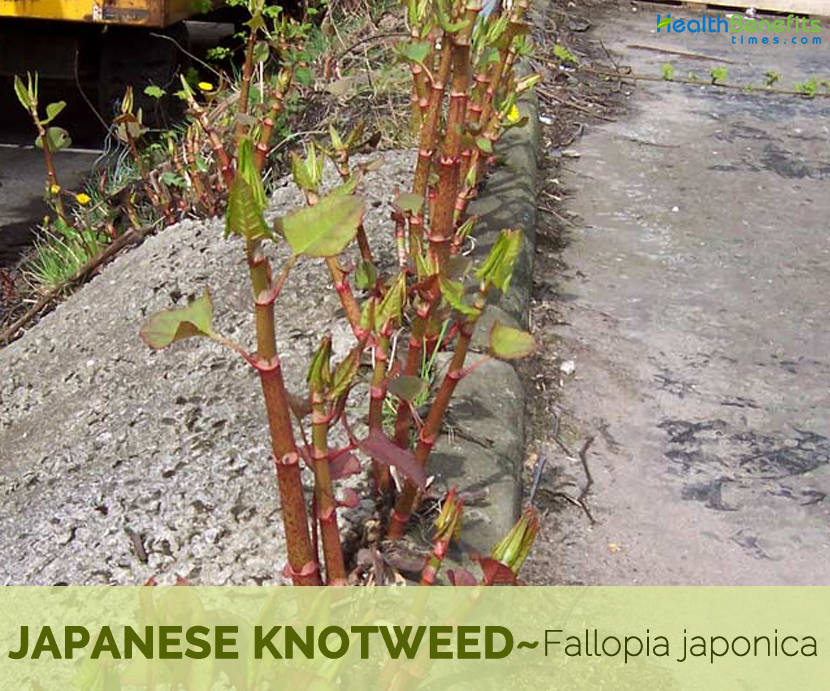 Fallopia japonica is a vigorous herbaceous shrub growing to 1-3 m (3-10 ft). The flowers are small, white to green which is 1/6-1/8 inch long. The stems are hollow, smooth, purple to green of 2.5 cm (1”) diameter. Leaves are arranged alternately, oval-triangular, 10-17 cm long and 7-10 cm wide. It has fleshy and red tinged shoots which is 30 cm x 30 cm across. It produces small, winged, shiny, triangular fruit which is 1/10 inch long. It is a perennial plant which has dark brown, with interior bright orange rhizomes.

Japanese knotweed is native to Eastern Asia. It is also available in the Europe, British Isles, USA, Canada, New Zealand and Newfoundland.

Japanese Knotweed is an excellent source of vitamin C and vitamin A. It also offers potassium, zinc, phosphorus and manganese. It is a great source of resveratrol which lowers bad cholesterol and chances of heart attacks. It also acts as anti-inflammatory which assist immune system to fight infections, relieves arthritis and prevents the body from neurotoxin damage.

Japanese knotweed has positive effect on the cognitive disorders such as dementia and Alzheimer’s disease. It is due to resveratrol content in this herb. It provides preventative effect on the neurodegenerative process which affects the neural pathways. Antioxidants eliminates free radicals and plaque which affects the mental function. Resveratrol energizes the brain pathways which prevents the health ailments. (1)

The food rich in fat increases the chances of heart problems and cardiovascular conditions such as high cholesterol. Japanese knotweed possesses resveratrol which helps to deal with such conditions. Red wine is drunk in large amounts in France due to which heart conditions are not common there. One should add Knotweed to the diet to get the heart protective properties. (2)

Japanese knotweed helps to treat the stomach problems such as bloating, constipation, inflammation, bloating, chronic pain and cramps. Resveratrol found in Japanese knotweed reduces the gastrointestinal distress and acts as a laxative which assists in the normal process of digestive system. (4)

Japanese knotweed possesses anti-cancer properties. Resveratrol is beneficial against carcinogens which lead to cancer such as colon, prostate, thyroid and breast cancer. Research is still going on but the early found results are satisfactory which adds a reason to use in order to prevent health. (5)

The poor diet is responsible for the improper regulation of insulin levels and prosper insulin resistance. It results in diabetes and health ailments. The addition of Japanese Knotweed helps to avoid these conditions. Japanese knotweed possesses resveratrol which prevents the development of insulin resistance and also regulates the level of blood sugar. (6)