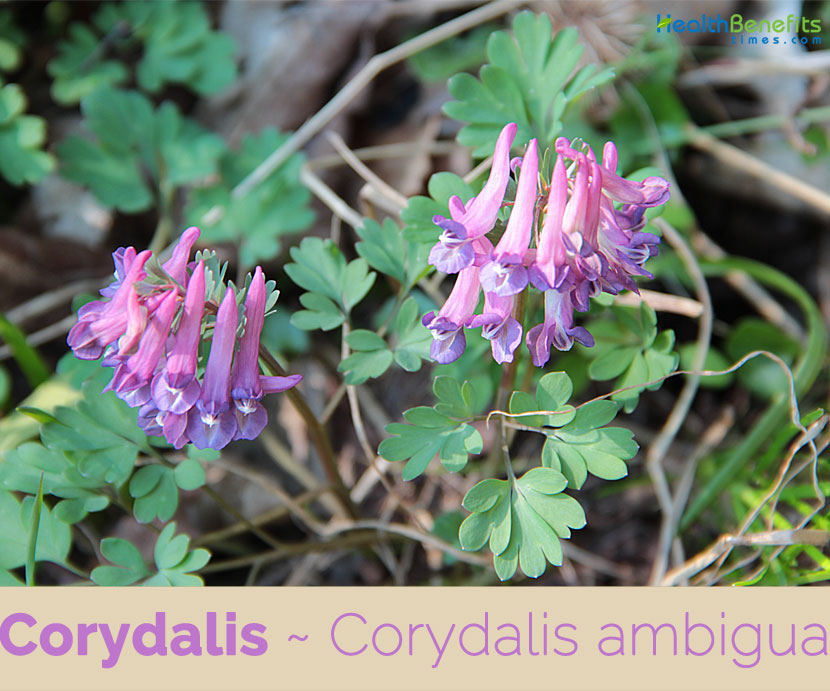 Corydalis ambigua is a tuberous early flowering East Asian flowering plant species in the poppy family Papaveraceae, a close relative of the poppy, and it is known to support muscle and joint comfort by increasing blood flow. Its exact native range is unclear due to taxonomic confusion. However it is said to have been originated from Siberia, northern China, and Japan, it is commonly grown in eastern and northeastern parts of China. It is one of the sources of the drug tetrahydro-palmatine. The plant is an important Chinese remedy used at least since the 8th century to help “revitalize the blood” and relieve almost any painful condition. It is particularly used for menstrual cramps, and for chest and abdominal pain. Research in China has confirmed the validity of corydalis’s traditional use, revealing that it consists of powerful alkaloids that are answerable for its analgesic effect. Corydalis is commonly prescribed by the Chinese in formulations for menstrual pain.

Corydalis is a small tuberous, herbaceous, perennial plant that normally grows about 8 in (20 cm) tall. The plant is found growing in woods, meadows from the lowland to the mountains, spring ephemeral in woodland, shady forest edge, edges of forests or woodland gardens. The plant prefers a moist, well-drained rather light soil, thriving in semi-shade. Scale-like leaf is present at the bottom and two leaves on the flowering stems. Plants are in leaf from March to June. Flowers are hermaphrodite (have both male and female organs). The plant propagated from seed in early spring or autumn, and the rhizome is harvested in late spring and early summer when the aerial parts have withered. Root or rhizome of the herb is dried out and subsequently sliced into cutaways and is made use of in herbal medications.

Research in China from the 1950s onward has shown that corydalis has useful pain relieving properties. The powdered rhizome has up to one-tenth of the analgesic potency of morphine — an alkaloid derived from opium poppy (Papaver somniferum,). Morphine is highly concentrated and the strongest analgesic in medical use. Although this research shows corydalis to be much weaker in its effect than morphine, it nonetheless indicates the value of corydalis in pain relief. 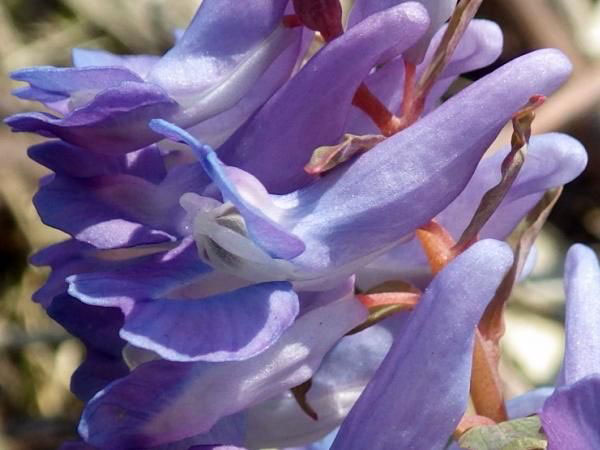 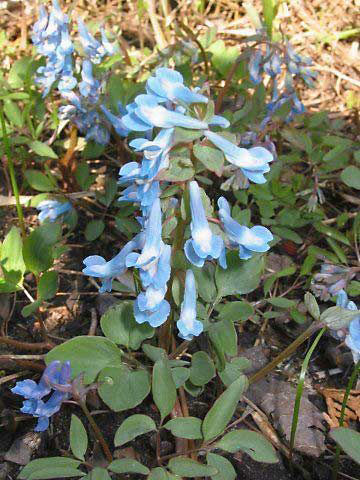 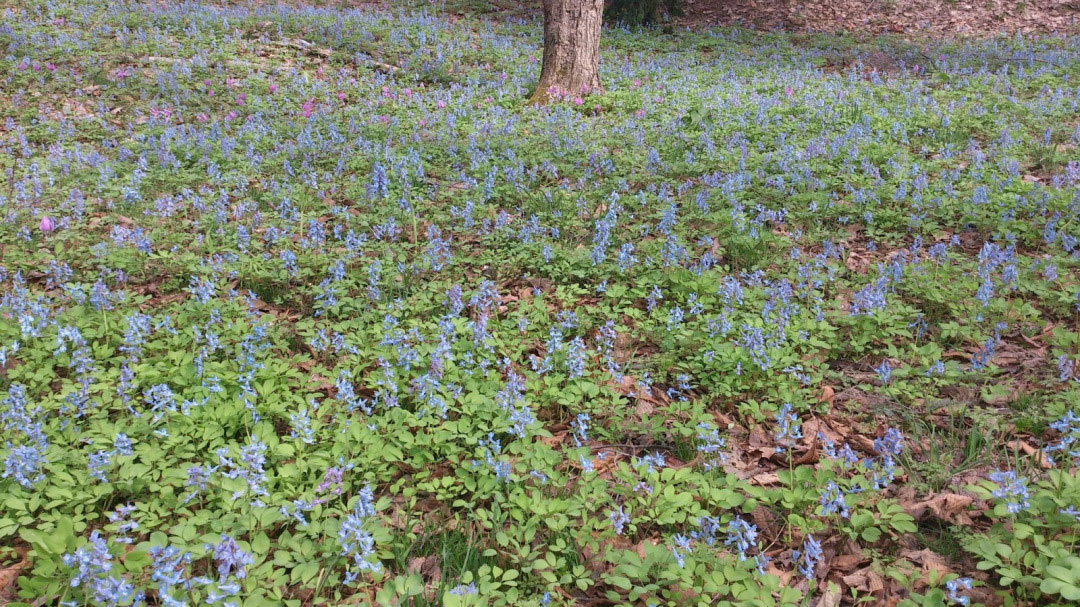 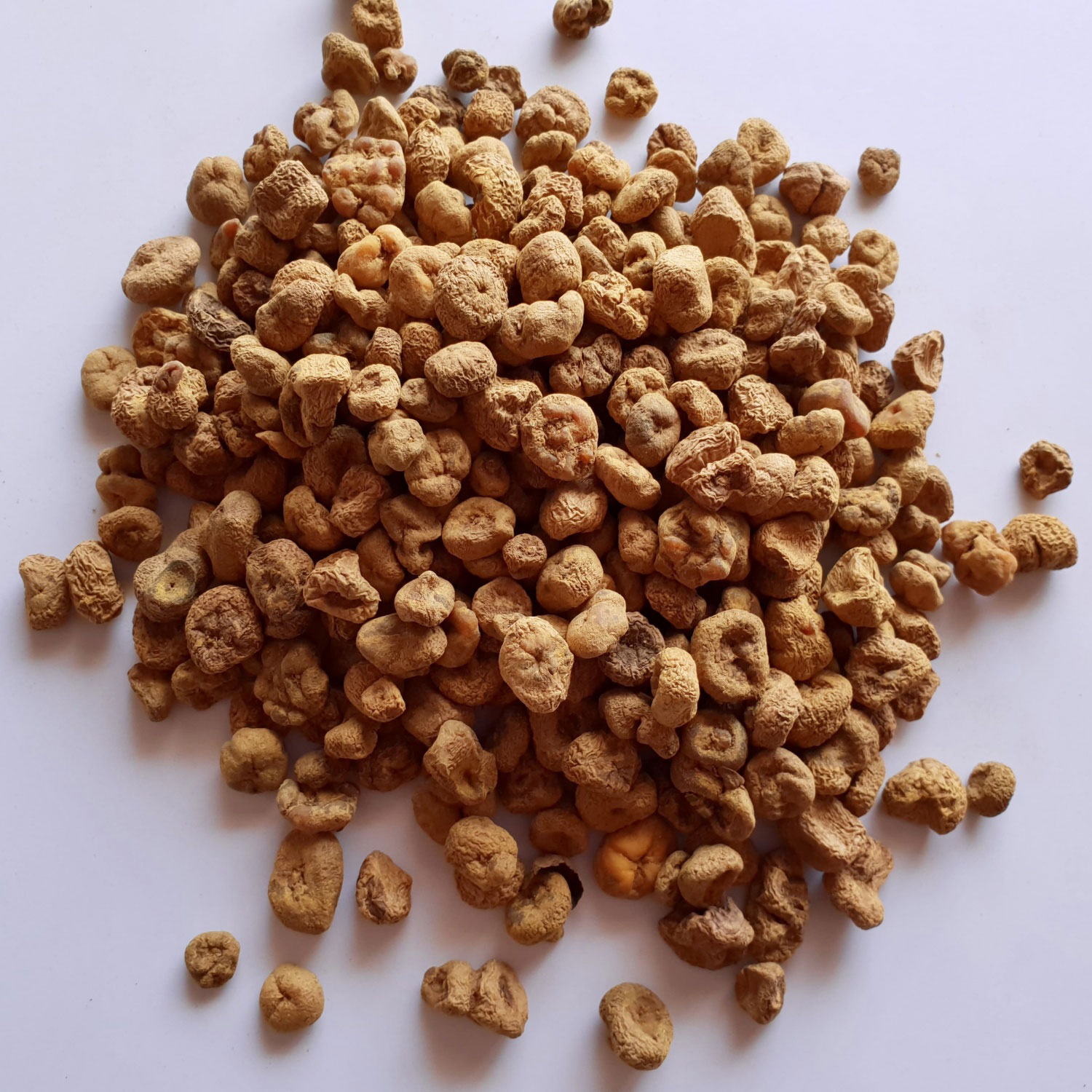 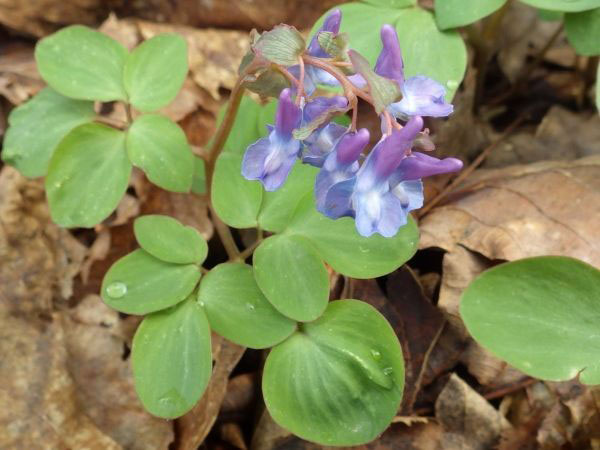 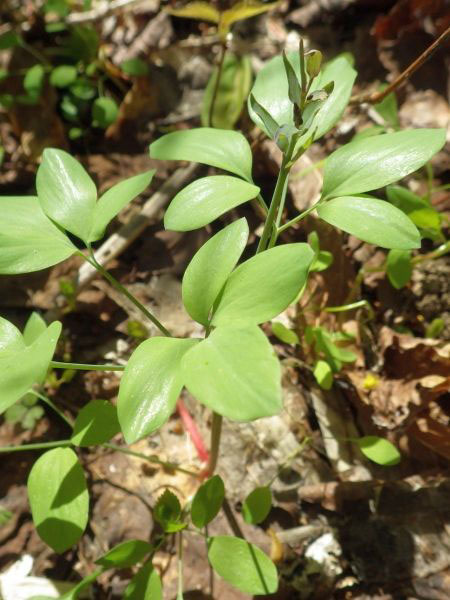 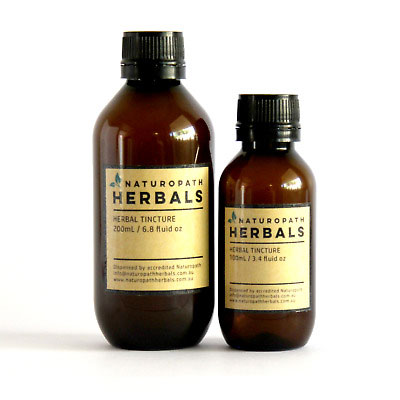 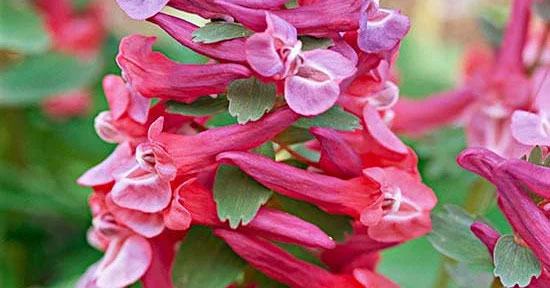 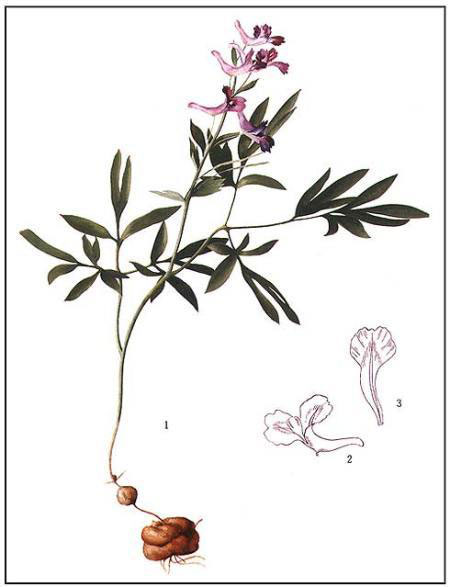 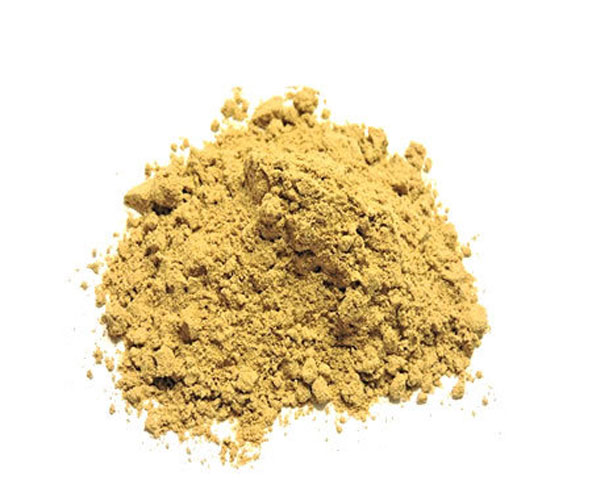 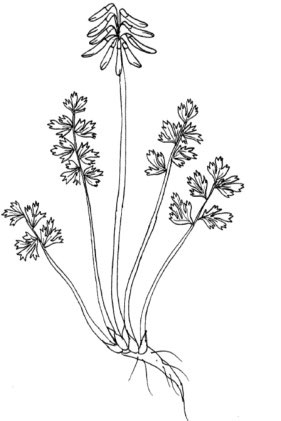 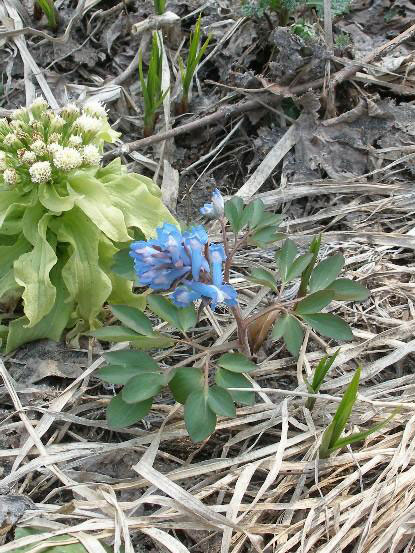 The Rhizome of the Corydalis ambigua plant has been used for thousands of years in traditional Chinese medicine for its pain relieving properties. Rhizome is just a type of root that spreads horizontally underground putting out stem and leaf above ground from its little nodes. This rhizome is dried and used in decoction with water or made into an alcohol tincture. Apart from pain relief, this herb has amazing benefits to the nervous system and the cardiovascular system, just have a look below

In Chinese medical theory, and in other herbal traditions, pain is often thought to stem from obstruction of normal blood flow. As corydalis is supposed to “invigorate the blood,” it is considered to be especially useful as a treatment for the pain that results from a traumatic injury.

It’s known as a blood moving herb, so helps with circulatory problems, sticky blood as well as the pain that blood stability can cause. It has traditionally been used to treat heart arrhythmia and palpitations and even shows promise in the reducing the size and occurrence of myocardial infarction (heart attacks). Corydalis acts peripherally to help lower blood pressure.

Corydalis is a star in the herbal world for pain relief. Rhizome of the plant is considered best for pain relief in traditional Chinese medicine. It is said to have between 1-10% the analgesic potency of opium, without any of the addictive side effects.  It’s known as an analgesic and used most successfully for visceral (internal organ) pain, and pain associated with the nervous system caused by injury or trauma.

When mixed with cinnamon bark it is very effective for dysmenorrhea (painful periods) and mixed with St John’s wort for neuro-pathic pain. It can also be used for most internal pain such as abdominal pain, endometriosis, chest pain, hernia pain, and headaches.

Corydalis is especially effective in treating nervousness, sleeplessness and restless leg syndrome. The tranquilizing properties of this herb make it a useful medication in treating insomnia and nervousness. Additionally, the potent alkaloids enclosed by the plant boost the sleep-stimulating essence of the barbiturates, which is around 40 per cent as effective as morphine as far as encouraging sleep is concerned. In America, herbal medicine practitioners combine corydalis with California poppy to cure anxiety, restlessness, sleeplessness and edginess.

Corydalis is also known to help with chronic and acute inflammation taken orally so has applications in helping the symptoms of pelvic inflammatory disease, arthritis and other chronic inflammatory illnesses. It can also be used topically in an ointment for relief in arthritis, sprains, and other aches and pains in the body.

Corydalis is also known as an effective treatment for insomnia without any grogginess or a hangover in the morning. It assists in falling asleep and staying asleep through the night. It could be mixed with rhizome of valerian or Passionflower for a powerful sleep combination.

The plant is quite effective in treating infected stomach ulcers and infections caused by parasites. Corydalis shows an anti–ulcer activity with no remarkable side effects. The constituent found in Corydalis is responsible for this anti-peptic ulcer action is called dehydro-corydaline and may reduce the H. pylori infection that causes the ulcers. It may also be useful in the treatment of the infection caused by Echinococcus granulosus that comes from the Hydatid worm.

Corydalis has been found to be extremely useful in preventing as well as treating cataracts. Alcohol extracted from the corydalis root prevents the development of cataracts related with diabetes.

The plant is known to help with the reduction in menstrual flow (menorrhagia) so it is considered wonderful for heavy painful menstrual bleeding. Adding ginger root and cinnamon to the decoction or infusing St John’s wort in after turning off heat, will show wonderful benefits.

Traditional uses and benefits of Corydalis

Appropriate dose of corydalis depends on several factors such as the user’s age, health, and several other conditions. At this time there is not enough scientific information to determine an appropriate range of doses for corydalis. Keep in mind that natural products are not always necessarily safe and dosages can be important. Be sure to follow relevant directions on product labels and consult your pharmacist or physician or other healthcare professional before using.