Trending
You are at:Home»Herbs and Spices»Health benefits of Cubeb pepper 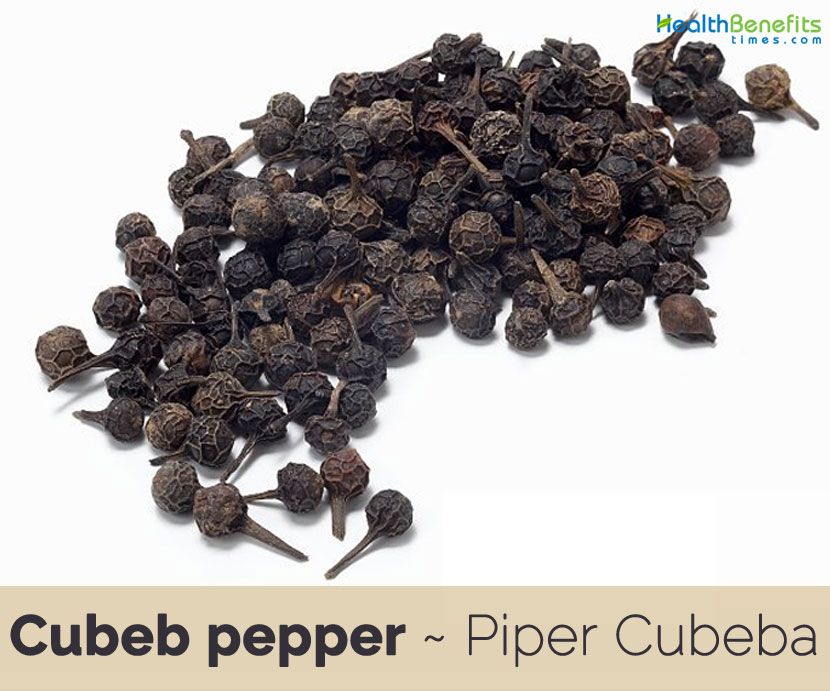 Piper cubeba, the dried ripe berries commonly known as Cubeb Pepper, Cubeb has been used in traditional medicines for various disorders like urogenital diseases, gonorrhea, dysentery, syphilis, abdominal pain, diarrhea, enteritis and asthma. It is a member of the piper family, cousin to piper longum and piper nigrum, better known as black and white pepper. The dried, wrinkled cubeb berries are similar in appearance to peppercorns, though grayish-brown in color. Their thin stalks, or “tails” that remain attached, give the fruit its nickname of “tailed pepper.” Its flavor is described as a cross between allspice and black pepper. The plant is native to Indonesia – Greater Sunda Islands. It is also cultivated in Java, Sumatra, Malaysia and Sri Lanka. Few of the popular common names of the plant are Cubeb pepper, Java pepper, Javanese peppercorn, West African black pepper, cubeb, Jawa peppercorn, Jawanese pepper, Tailed pepper, Cubeb, False Pepper and Javanese Pepper.

The name cubeb comes from Arabic kabāba (كبابة‎) by way of Old French quibibes. Cubeb is mentioned in alchemical writings by its Arabic name. In his Theatrum Botanicum, John Parkinson tells that the king of Portugal banned the sale of cubeb to promote black pepper (Piper nigrum) around 1640. It experienced a brief resurgence in 19th-century Europe for medicinal uses, but has practically vanished from the European market since. It continues to be used as a flavoring agent for gins and cigarettes in the West, and as a seasoning for food in Indonesia. This plant grows a lot in Java and Sumatra Island and produces fruit. It is usually harvested before ripe and then dried. Traditionally, cubeb pepper is used as a medication for breath shortness, body warmers, and deodorizing mouth. Because of phenolic, it is often used to stop the infection in the genitals.

Cubeb pepper is a perennial, climbing woody shrub that grows around 18 – 20 feet tall. The plant is found growing in full or partial shade in the moist deciduous tropical forests, edges of mangrove forest, also found along streams, forest tracks and margins. The plant grows best in a rich, fertile, well-drained soil. Stem is glabrous, jointed, cylindrical and striate stem somewhat thickened at the nodes and rooting at the nodes.

Leaves are alternate, on short stout petiole, blade is about 6 inches long, lanceolate or oval oblong, tapering to the acute apex, usually somewhat unequal at the base, quite entire, slightly wavy, glabrous on both surfaces, somewhat coriaceous, deep green rather paler and prominent vein beneath.

Flower is unisexual, dioecioues, minute, sessile, each with a bract at the base, densly crowded in small, cylindrical, stalked, solid spike coming of opposite the leaves. The male spikes are slender, tapering, shortly stalked, about an inch long and the female are shorter, blunt, thick and fleshy, on longer stalks.

Fertile flowers are followed by globular smooth berry, about ¼ inch long, with a blunt apiculous and tapering below into a stalk –like base, which a little longer than round extremity, projecting horizontally from the axis and together forming a lax raceme ( many of the ovaries becoming abortive) about 2 inches long. Fruits are green when young turning to yellowish red as they mature. 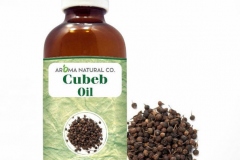 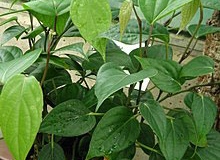 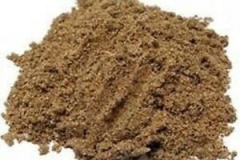 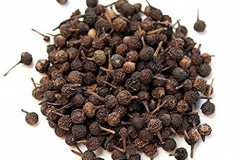 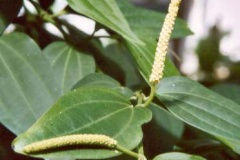 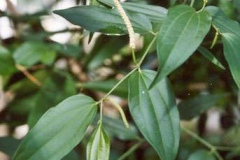 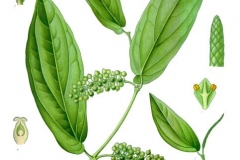 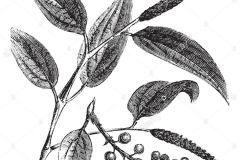 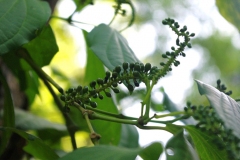 Dried cubeb berries consist of an essential oil that contains monoterpenes and sesquiterpenes. The terpenes contained in the berries of the plant have anti-inflammatory and anti-bacterial properties. Cubeb helps to relieves headaches and dizziness, serves as an aphrodisiac and promotes concentration.  Mortared cubeb pepper powder has a stimulating effect when smoked. Listed below are some of the popular health benefits of consuming Cubeb pepper

1. Inflammatory diseases of the urinary tract

Due to its anti-inflammatory effect, Cubeb pepper was traditionally used for infections of the urogenital tract (kidney inflammations, bladder catarrh, and ureter infections, prostate and uterine inflammations).

Cubeb peppers are also used to treat gastritis or to strengthen the gastrointestinal tract. Cubeb pepper promotes digestive activity by stimulating salivation and the production of gastric juices.  Cubeb is especially potent after eating high-fat and hard to digest meals.

Indian folk medicine (Ayurveda) recognizes the mucus-dissolving properties of this age-old medicinal plant. Cubeb pepper remains in active use in Ayurveda today as a cough-suppressant for mild bronchitis, nagging cough, and generally to address respiratory symptoms.

This plant seed is used as a cold medicine for babies. Mash 1 lesser galangal and 9 cubeb seeds, mix with a little water. Apply this paste to baby’s body.

To increase body energy, provide some natural ingredients from cubeb. Take 5 clove seeds, 5 cubeb seeds, 1 lemongrass, 4 lime leaves, ½ ginger rhizomes, a pinch of cinnamon, ½ nutmegs, and a little sugar. Slice all ingredients, and then boil with 5 glasses of water. Wait until the water is reduced to 2 glasses. Strain and drink when the water is still warm, 3 times a day.

Cubeb is very aromatic and has antiseptic properties so it is has been used for dental problems for many years and it is particularly very useful for halitosis (mouth odor). You can read the research that proves this use here.

If you are looking for a natural fever remedy, then the cubeb is the right choice. Natural content in healthy seeds is powerful to reduce body heat when the fever comes.

8. Medicine for a headache

Overcome the pain in your head by using the cubeb. Seeds can cure headaches, dizziness, and other symptoms such as headaches or a migraine.

Inflammation of your body can be overcome with cubeb. This seed has a natural anti-inflammatory function, which is a health function that can relieve inflammation in your body and reduce the pain caused by the inflammation.

Cubeb is one of the best ingredients to take during cold and cough and even during mild fevers as it has anti-pyretic properties. We take it in the form of tea along with holy basil and turmeric powder. It is very soothing to drink when we suffer from cold and it also relieves headache.