Trending
You are at:Home»Herbs and Spices»Health benefits of Devil’s Club 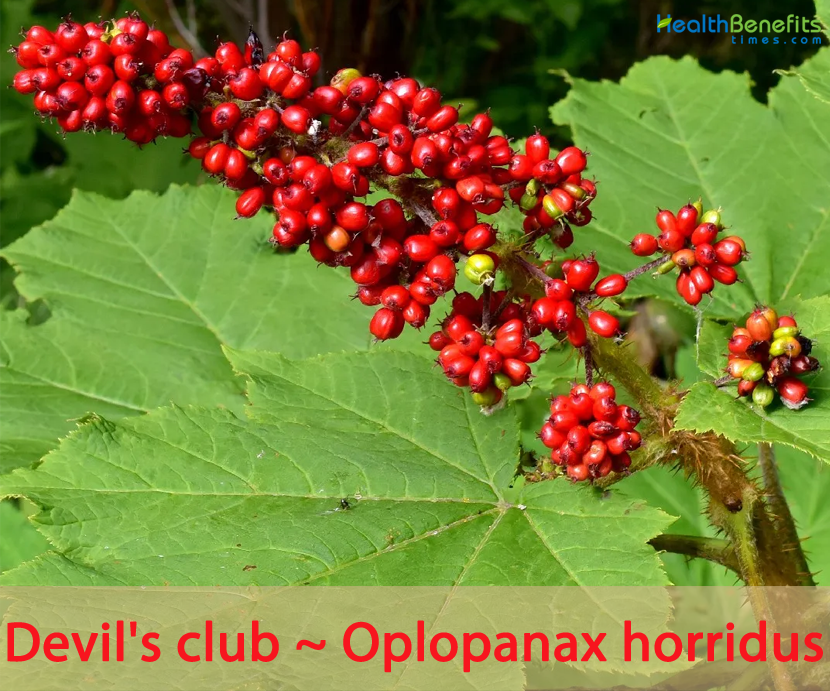 Devil’s club or devil’s walking stick (Oplopanax horridus syn. Echinopanax horridus is a large understory shrub belonging to Araliaceae Juss. (Ginseng family), which comprises famous botanicals such as Asian ginseng (Panax ginseng) and American ginseng (Panax quinquefolius). The plant is native to south-central Alaska south along the Pacific Coast and the western slope of the Cascade Range to southern Oregon and east to southwestern Yukon Territory, Idaho, and western Montana.  Disjunct populations occur on several islands of northern Lake Superior, including Isle Royale and Passage Island, Michigan, and Porphyry and Slate islands, Ontario. It may also be found in temperate regions of Northern China, the south of Primorye, northern part of the Korean Peninsula, and Russia, while O. japonicus is endemic to central Japan.

The plant is noted for its large palmate leaves and erect, woody stems covered in noxious and irritating spines. It is also known as Alaskan ginseng and similar names, although it is not a true ginseng. Some of the common names of the plants are Devil’s club, Devil’s walking-stick, Devilsclub and Alaskan Ginseng. The genus name, Oplopanax, is derived from hoplon, meaning weapon and panakos meaning panacea or “all-heal”—referring to the medicinal qualities of these shrubs and their relationship to the well-known Asian herb, Ginseng, Panax ginseng.  Oplopanax is sometimes misspelled, Ophlopanax. Both the common name and specific epithet, horridus, refer to its spiny, wicked-looking appearance. Devil’s club is notable for its unique appearance, including its large leaves and sharp, needle-like brittle yellow spines that break off easily if the plants are handled or disturbed, and the entire plant has been described as having a primordial appearance.

It’s often used medicinally and has long been used by Native Americans to treat a range of conditions, including cancer, diabetes, and rheumatoid arthritis. Traditionally, the stems, leaves, bark, and berries of the plant were harvested and made into teas, tinctures, ointments, and salves. Today, devil’s club is widely available over the counter and consumed or applied directly to the skin to relieve pain, soothe inflammation, treat infections, and boost immune function. The plants are slow growing and take many years to reach seed-bearing maturity; this makes them very sensitive to human impact as they do not reproduce quickly.

Devil’s club is an erect to slightly spreading, large understory, deciduous thicket-forming shrub that generally grows to 1 to 1.5 meters (3 ft 3 in to 4 ft 11 in) tall. Some stands located in rainforest gullies or moist, undisturbed areas can reach heights of 3 meters (9.8 ft) to 5 meters (16 ft) or more. The densely thorned stem can reach 3 cm in diameter. The thick stems, petioles and leaf veins are generously covered with sharp yellow spines from 5-10 mm long. Older stems have a gray bark while the younger twigs and buds are reddish brown. The plant is found growing in moist woods, especially by streams, forest streams, and moist soils in the forest and in drainage, seepage, and wet bottom areas. The plant grows in rich, loamy soils that are constantly moist. It can tolerate seasonal flooding and waterlogged soils. It prefers full shade but can grow in part shade if the conditions are right. It will not grow well in full sun and patches often slowly die when exposed to the forest edge by logging or development.

Devil’s Club frequently falls prostrate on the ground and roots from its fallen stems. It also spreads vegetatively through its spreading rhizomes, often producing clonal patches. The stems are all very densely covered with sharp spines that can be very irritating when they pierce the skin. The irritation, once pierced in the skin, can sometimes last for several days.

Devil’s Club has simple, large palmate leaves (lobed maple-like leaves) with from 5 to 13 lobes on each leaf. The leaves may have spines along the leaf veins on both the upper and lower surfaces. The blades are about 10-35 cm wide and are about as long as the stout petioles. The leaves have long petioles and are notched at their base where the petiole attaches. They are arranged on the stem spirally and are usually very large, anywhere from 15 – 45 cm across.   In the fall its large leaves turn yellow and drop off before winter, returning in early spring the following year.

In spring Devil’s Club produces sub-sessile, capitate umbels elongated racemes or panicles. The racemes or panicles grow up to 10 inches (25 cm) in length. The flowers contain 5 tiny sepals. Individual flowers are very shortly stalked or almost sessile, greenish or white with 5 petals and measures approximately 1/4 of an inch (5-6 mm) in length. The petals are long and loosely twisted. Flower has 2 distinct styles and 5 stamens. The 2-celled ovaries are inferior and the stamens are longer than the petals. Flowering normally takes place in between June to August.

Fertile flowers are followed by clusters of small round red drupes (a fleshy fruit with a hard pit) about 4 – 7 mm in diameter. They are somewhat flattened and are 5-8 mm long. Each berry consists of 3 seeds. Even though it produces seeds in its drupes, more often it produces populations of clones that grow from spreading rhizomes. 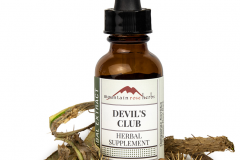 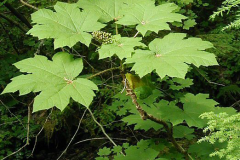 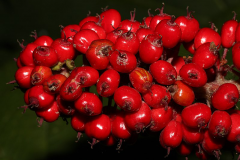 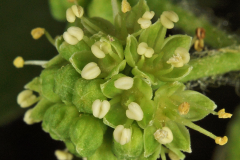 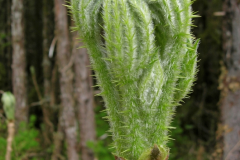 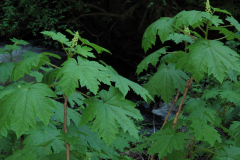 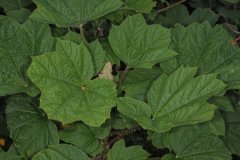 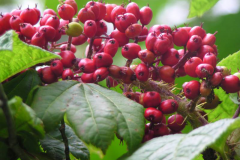 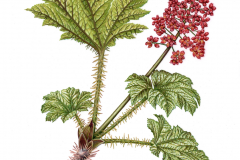 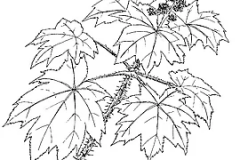 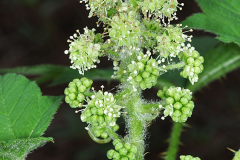 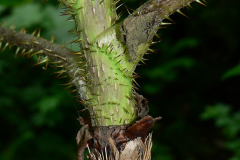 Devil’s club is often used to treat inflammatory conditions like arthritis, eczema, and psoriasis. Different researches have concluded that the extracts from the leaves of devil’s club reduced multiple markers of inflammation. Leaves were found to contain several antioxidant compounds, including Gallic acid, chlorogenic acid, and protocatechuic acid. More research is needed to determine how devil’s club may affect health and inflammation in humans.

Another test-tube research concluded that the devil’s club extract increased the cancer-fighting activity of chemotherapy drugs like cisplatin and gemcitabine. Still, studies in humans are needed to determine whether devil’s club affects cancer growth when used as a supplement.

Devil’s Claw has been studied extensively for the pain relief it can provide to sufferers of arthritis and osteoarthritis. Research was conducted to test the analgesic effects of Devil’s Claw. The results demonstrated that this herb is effective in decreasing knee and hip osteoarthritis pain; however the mechanism by which it does it is not well understood. Devil’s Claw components, called iridoid glucosides, especially harpagoside, may be responsible for its anti-inflammatory effects. Devil’s Claw is also beneficial in decreasing the progression of osteoarthritis by preventing cartilage degradation.

Known as a powerful digestive tonic, the flavonoids and phyto-sterols found in Devil’s Claw are antioxidant, choleretic (stimulate bile production) and antispasmodic which help to maintain overall digestive health. It can provide considerable relief from heartburn as it soothes the inflammation caused by acid reflux. Devil’s Claw can also help in relieving the symptoms of an upset stomach by suppressing inflammation of the stomach.

Research conducted at the University College of Cork in Ireland, has shown that Devil’s Claw can slow down or even stops the production of the “hunger hormone” ghrelin. This herb may be useful for weight loss in suppressing hunger pangs if overeating is a problem, and could make it a promising treatment for “Binge Eating Disorder”. In fact Devil’s Claw is now being investigated for its use as an anti-obesity treatment.

Root of Devil’s Claw can be applied to wounds to stimulate healing. The anti-inflammatory effects of this herb coupled with the pain relief it provides are thought to be responsible for its traditional use as a skin healer. 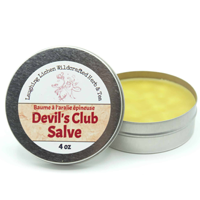 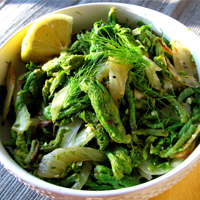 Side effects and risks

People may be at higher risk for an unsafe interaction with devil’s claw if they are: