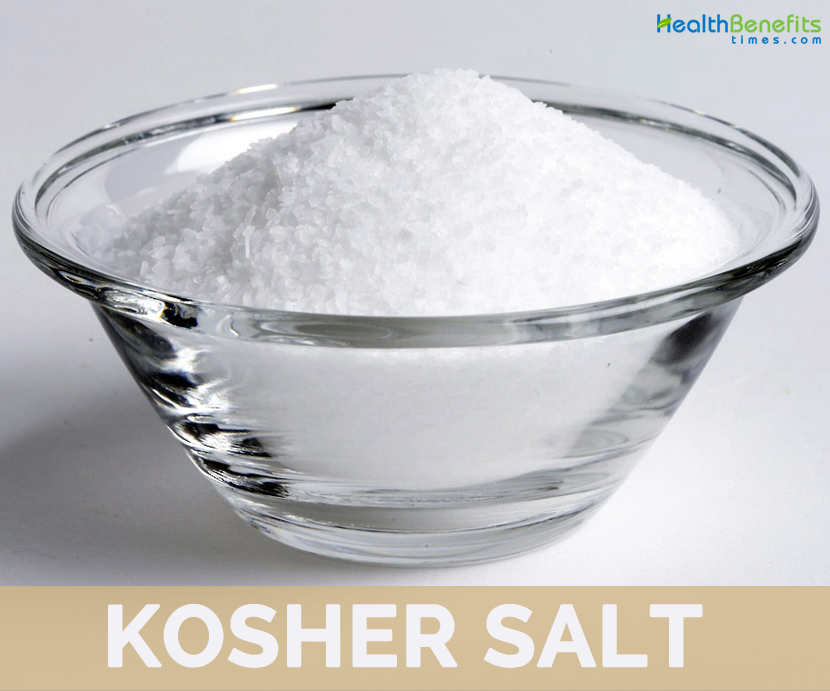 Kosher salt commonly known as cooking salt, flake salt, rock salt and kashering salt is a coarse-grained salt made from the salt crystals, used in the process of koshering meats by removing surface blood. It has a much larger and more porous grain size than common table salt. Kosher salt consists of sodium chloride, but it normally does not contain the mineral iodine, so it is not considered iodized salt. Some kosher salt contains anti-clumping agents in small amounts. It is considered a useful salt for sodium reduction. One teaspoon of kosher salt contains about 1,120 milligrams of sodium. In comparison, 1 teaspoon of table salt contains about 2,325 milligrams of sodium. Total sodium should be limited to less than 2,300 milligrams daily; and 1,500 milligrams for people aged 51 or older, African Americans or people with existing chronic kidney disease, diabetes or hypertension. The evaporation process concludes the salt’s final shape, so kosher salt can be flat or pyramidal in structure depending on the brand. The top two brands are Morton and Diamond Crystal: Morton’s is much coarser than table salt, but Diamond Crystal is even coarser than Morton.

Kosher salt can be used in most cooking applications. Some chefs favor kosher salt to table salt for its purity. Though, Kosher salt is generally not suggested for baking applications particularly recipes that contain a small amount of liquid ingredients, since it may not thoroughly dissolve. It may also be used as a finishing salt for cooked and baked goods to give the impression that an item is saltier. However, its porous grains help to remove moisture, so other finishing salts may be superior to retain moisture and infuse a mineral-like taste.

Kosher salt will also increase the temperature of the water when boiling foods, such as potatoes, pasta or vegetables. This, in turn, will shorten the amount of time that the food needs to cook. This can come in handy when you are in a hurry to put dinner on the table in the evening. Kosher salt, is considered better than processed salt for pickling purposes. The salt crystals do not dissolve as readily as table salt in the pickling solution, making kosher salt a better option.

When to Use Kosher Salt

The best usage of kosher salt is when you’re seasoning food with your hands, particularly meat and vegetables before cooking. You can easily pick up pinches with your fingers, and since they don’t dissolve immediately, you can visually see where you’ve sprinkled it and determine if it’s even or if you need to do more.

Kosher salt is also great to use when a recipe specifies “coarse salt.” However, many bakers tend to shy away from kosher salt and call for table salt instead because they feel that it dissolves more quickly and evenly into baked goods.

Because the salt has a more pure flavor due to the lack of metallic tasting additives such as iodine or dextrose, it is often used in the kitchen instead of additive-containing table salt so such flavors are not introduced to prepared food. Estimating the amount of salt can also be more easily evaluated when salting by hand due to the larger grain size. Some recipes specifically call for volume measurement of Kosher/kitchen salt which weighs less per measure due to its lower density, and is therefore less salty than an equal volume measurement of table salt.

Coarse-grained salt is used to create dry brine which increases succulence and flavor, sometimes with flavor additions such as herbs, spices or sugar. The meat is usually soaked in cool water, drained, completely covered with a thin layer of salt, and then allowed to stand on a rack or board for an hour or more. The larger salt granules remain on the surface of the meat, for the most part un-dissolved, and absorb fluids from the meat which are then partly reabsorbed with the salt and any added flavors essentially brining the meat in its own juices. The salt rub is then rinsed off and discarded before cooking.

Due to its grain size the salt is also used as a rough cleaner for cookware such as cast iron skillets. Mixed with oil it retains its harshness but can be easily dissolved with water after cleaning, unlike pumice or calcium carbonate based cleansers which can leave a gritty residue if not thoroughly rinsed away. 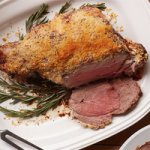 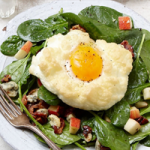 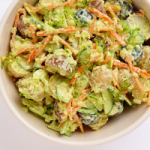 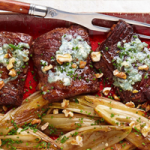