Trending
You are at:Home»Vegetables»Dock – Rumex spp. 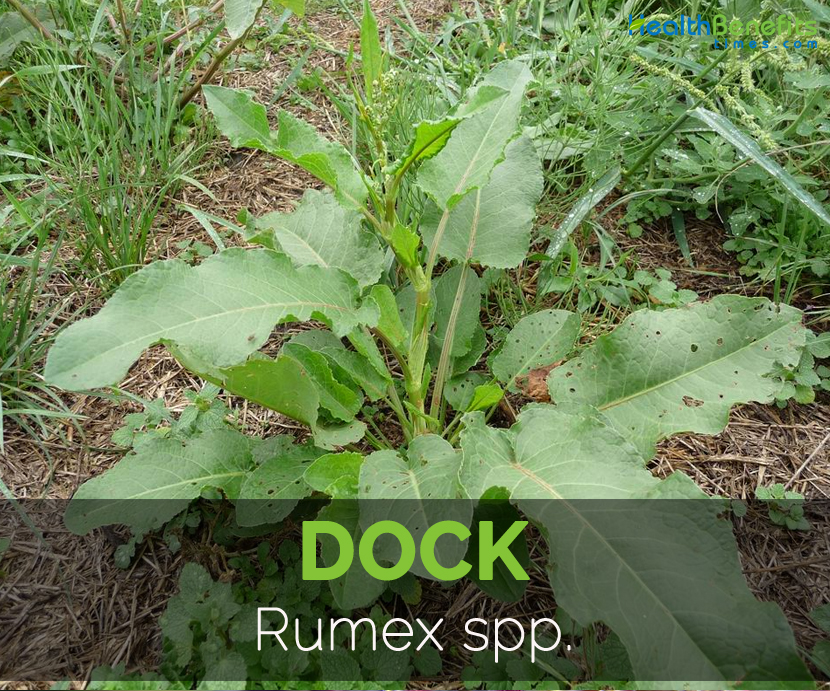 Rumex spp., commonly known as broadleaf dock, cushy-cows, butterdock, kettle dock, curly dock and smair dock, is a species of flowering plant in a buckwheat family Polygonaceae. It is native to Europe which is now available in United States, Australia, New Zealand and others. The three varieties of dock are: Curled dock, Western dock and Willow dock. It could be found on entire continents as pasture weed, grains and tillage cropland. This plant is considered as perennial weeds. It has alternate leaves with tough and unbranched stem. Dock does best in loamy fertile soils. It is a weed in lawns, orchards, home gardens, roadsides as well as waste areas. It is generally found on borders of woods, floodplains, buildings, and poorly drained as well as nutrient rich soils. It is common on acid soils and upland sites.

It is a perennial herbaceous plant that has tough, reddish and unbranched stem, reaching a height of 1-3 ft. The leaves are alternate, lanceolate to ovate and are 30 inches long. The flowers are small, greenish, and 5 mm across which blooms during June to October. The plant has a stout, branched and yellow taproot. The fruit has the size of 2.5–3.5 mm (0.1–0.14 inch); reddish-brown and 3-angled achene.

Since ancient times Dock is known as a medicinal plant and used in traditional medicines. It possess various antiscorbutic, astringent, cholagogue, depurative, homeopathy and laxative properties which has beneficial effects to maintain the overall health.

The study conducted shows that high intake of Vitamin C helps to lower the appearance of wrinkles, skin dryness and also slows down the aging process. Vitamin C is vital for the tendons, skin, blood vessels and ligaments. It speeds up the healing process and also forms a scar tissue.

The evidence shows that the skin cream with Vitamin C reduces the skin redness. The skin health could be maintained with proper diet rich in antioxidants which also help to prevent the skin cancer.

Neurotransmitters depend on adequate amount of iron in the blood to maintain the positive mood. The mood depends upon the hormones balance such as serotonin, dopamine and others. When low levels of oxygen are present in the body, brain cannot synthesize properly.

The deficiency in iron leads to bad sleep, poor mood, lack of motivation and low level of energy. The feelings of anxiety or mild depression are the contributor of iron deficiency.

Magnesium is required for the formation of bones, impact osteoblast activities as well as osteoclasts which helps to build the density of bones.

Manganese is vital for enzymes such a glutamine synthetase, arginase and manganese superoxide which acts as an antioxidants, reduce the oxidative stress as well as inflammation which can lead to cancer or heart disease. Deficiency of manganese helps to reduce pain, inflammation and stress which can cause various chronic ailments. The low level of manganese relates to low superoxide dismutase function which is the only enzyme to slow down the aging process and extend health.

Iron and copper combines while synthesizing red blood cells and hemoglobin. The study shows that copper assists in the iron absorption from an intestinal tract releases iron in the liver where it is stored.

Iron from the supplements or food sources are used to form red blood cells. When there is deficiency of copper, the level of iron also decreases which causes anemia that is caused due to the deficiency of iron. Anemia results in muscle aches, fatigue, impaired brain function and digestive problems.

Kidneys play a vital role in the body. It eliminates the excess organic molecules present in the blood. Phosphorus is essential for the functioning of kidneys and also detoxifies the body by removing the waste and toxins through the urination. Kidneys and digestive organs depend on the electrolytes such as potassium, phosphorus and magnesium to balance the level of water, sodium, uric acid and fat in the body.

Fiber has a vital role in digestion because it adds bulk to the stool, eases to pass the waste through the digestive tract that helps to prevent constipation, indigestion and bloating. It enhances the digestion as the soluble fiber absorbs the water to evolve into viscous, glutinous substance and fermented by bacteria in digestive tract. Intake of an adequate amount of water is essential for the fiber to provide these effects.