Trending
You are at:Home»Vegetables»Shallot facts and health benefits 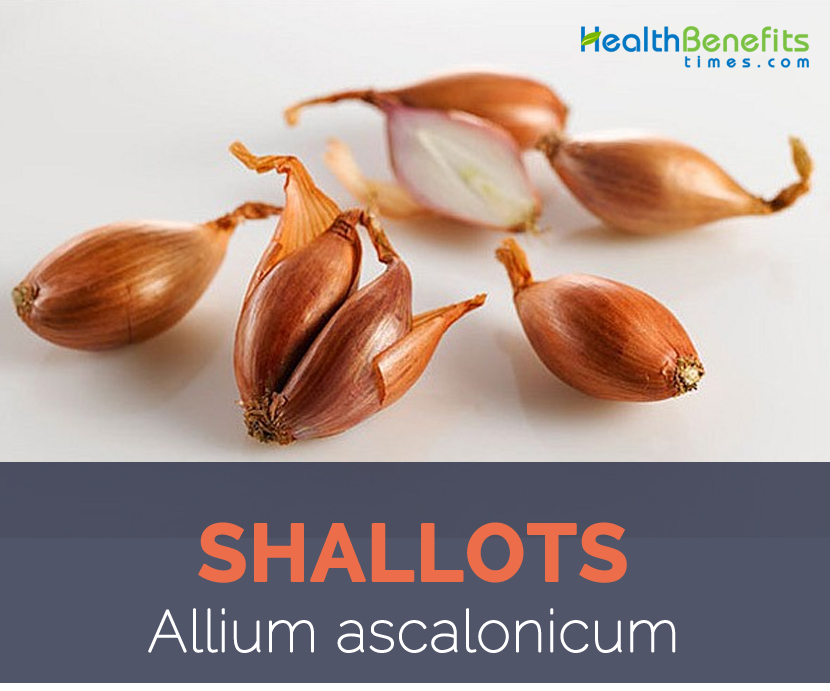 Shallots (scientific name Allium ascalonicum or Allium cepa var. aggregatum) are members of the Allium plant family, which includes onions, garlic and chives and smaller in size. Shallots are native to Central or Southeast Asia, traveling from there to India and the eastern Mediterranean. They are closely related to garlic and have a similar structure of a head composed of multiple cloves. Some popular common names of shallots are Baker’s Garlic, Chinese Onion, Chinese Scallion, Chinese Shallots, Japanese Scallion, Kiangsi Scallion, Kiangsi Shallot, Oriental Onion, Rakkyo and Small Angled Chives. Shallots are often thought to be another variety of onion, but they are actually a species of their own. It has a milder flavor than an onion and once peeled, looks like garlic because it has multiple bulbs. Gray Shallot, Dutch Yellow Shallot and French Red Shallot are few of the popular varieties of Shallots which is grown throughout the world due to its wonderful taste and higher nutritive values.

Shallot is a biennial clustered, caespitose bulbous herb growing up to 63 cm tall and found growing in temperate and subtropical conditions with full sun. It prefers well-drained, friable and moderately fertile soils such as sandy loams. Shallot plant has adventitious roots. Leaves are distichous, cylindrical, hollow, 20–50 cm by 1–5 mm and 3–5 angled. Flower is campanulate, purplish with six tepals arranged in two whorls, six stamens and a pistil longer than the tepals. Plant has obovoid–globose fruit with concave nectaries covered by hood like projections at the base. Style exserted.

Shallot is petite members of the Allium plant family, which includes onions, garlic and chives. Like garlic, shallots are formed in clusters of offsets with a head composed of multiple cloves. Shallot bulb is narrowly ovoid to ellipsoid, 1–4 cm in diameter and has white, membranous coat which is often tinged with golden brown to rose-red color. It has pulpy white flesh with some green coloring. An average weight of the bulb is about 25 gram. Normally it has milder and more aromatic flavor and taste somewhat like onions milder and delicious. Shallots generally have two to three bulbs per segment and are aromatic and savory when raw. As they cook, their flavor becomes more delicate and sweet. However, similar to garlic and onions, shallots cause irritation in the eye when sliced. Due to its wonderful taste it is consumed throughout the world.

Shallot occurs unexpectedly in Central and Eastern China (in Anhui, Fujian, Guangdong, Guangxi, Guizhou, Hainan, Henan, Hubei, Hunan, Jiangxi and Zhejiang provinces) and in Japan, Korea, Russia and Mongolia. It is extensively grown in China and Japan. It is also cultivated in Southeast Asia (Cambodia, Laos, Vietnam, Thailand, Myanmar, Malaysia, Singapore and Indonesia) and introduced with oriental emigrants from this region into further areas, e.g. the United States (Hawaii, California) and Cuba. At present it is grown throughout the world due to its wonderful higher nutritional value and delightful taste.

Shallot is a nutrient dense and delightful accessory for your food which is used by peoples throughout the world. A few of the remarkable health advantages of shallots consist of their ability to reduce blood pressure, helps prevent or treat allergies, manage cholesterol and heart health, antibacterial and antiviral properties, help fight obesity, soothes nerves, better circulation and metabolism and diabetes control.

Shallots consist of high and varied content of antioxidant compounds, like kemferol, quercetin and various sulfuric antioxidants. All these antioxidants are released when the cell surface is interrupted, which happened while slicing or crushing, similar to garlic. As soon as these antioxidants are released, they form another appreciated compound called allicin. This powerful compound helps to reduce cell mutation and various cancers. Research has linked shallots to a reduction in lung and oral cancers, as well as stomach, colorectal, and breast cancer.(1)

The combination of potassium, a well-known vasodilator, and the action of allicin, which releases nitric oxide in the body, blood pressure is considerably reduced. A vasodilator relaxes the walls of the blood vessels and permits blood to flow more generously. This avoids clotting and stress on the cardiovascular system, further enhancing heart health.(2)

Numerous researches have shown that shallots have encouraging anti-allergic effects that can be attributed to their anti-histaminic, anti-inflammatory and antioxidant activities. A 2009 study published in the Journal of Medicinal Food discovered that shallots and onions are effective for impacting numerous actions responsible for allergic reactions.(3), (4)

Low levels of vitamin B6 have been related with increased symptoms of rheumatoid arthritis (RA), like more severe pain. Certain earlier researches are finding that people with RA need more vitamin B6 than healthy people because they experience constant muscle aches and joint pain because of long-lasting inflammation. Vitamin B6 benefits include curbing pain and useful in supplement form for controlling aches in the muscles and joints due to arthritis. Shallots consist of 0.345 mg of vitamin B6 which is 26.54% of the daily recommended value.

Allicin, the compound formed when shallots are sliced and diced, has been directly connected to regulating cholesterol levels within the body. Allicin actually prevents a reductase enzyme which is created in the liver, which is the enzyme that controls cholesterol production. By dropping total cholesterol levels in the body, shallots help to prevent atherosclerosis, coronary heart disease, heart attacks, and strokes.(5)

Both shallots and garlic produce biochemical reactions which are known to fight infections, viruses and inflammation. Various immunological parameters of shallots are researched; researchers have discovered that shallots’ antioxidant enzymes help fight common illnesses and more serious infections, too.

Onions have also showed antifungal activity against various fungi in many researches, including Candida. If you want to fight candida the natural way, low-sugar, healing veggies like shallots should be at the top of your list.(6)

Research has discovered that EEOs found in shallots can suppress lipid (or fat) accumulation and possibly help prevent obesity. Since obesity is closely associated to heart disease, diabetes and cancer formation (obese patients are considered to be at an elevated risk of developing various cancers and other long-lasting diseases), shallots might be beneficial for preventing both weight gain and obesity-related problems.

For those worried parents whose kids are small eaters, iron supplementation help increase your child’s appetite. Research by The Journal of Nutrition performed on Kenyan primary school children found that iron supplementation increased appetite and growth in children. Therefore including iron rich foods like Shallot, black beans, liver, Spinach in your regular diet help to improves your appetite and also help to get rid of  iron deficiency related health problems.(7)

Copper which is found abundantly in shallot plays an important role in ensuring the proper function of the thyroid gland. However, excess copper is a major cause of thyroid malfunction, so you need a very balanced level of copper in the blood, or else hormonal activity will be imbalanced, and you can develop symptoms of either hypothyroidism or hyperthyroidism. Shallots consists of 0.088 mg of copper which is 9.78% of the daily recommended value.

Various minerals and vitamins found in shallots, like  pyridoxine can help to encourage the release of GABA in the brain, which is important for maintaining low stress levels and keeping the hormones in the body at the appropriate levels. If you wish to reduce stress or relax your mind, shallots can give you a quick GABA boost. Folic acid also found in significant quantities in shallots, which is an essential B-vitamin that help with mental and emotional help by regulating hormonal and enzymatic reactions in the brain.(8)

Shallots have higher mineral content like iron, copper, and potassium than that of onions. Iron and Copper help to boost circulation in the body by encouraging the production of red blood cells. With more RBC in the blood stream, blood circulation increases, bringing more oxygen towards important parts of the body and increasing energy, vitality, cell regrowth, healing, and metabolism.(9)

Consuming plenty of manganese along with calcium help improve symptoms of PMS like tenderness, mood swings, muscle pain, anxiety  and trouble sleeping and work as a natural cure for PMS. Research published in the American Journal of Obstetrics and Gynecology found that women who have lower levels of manganese in their blood experienced more pain and mood-related symptoms during pre-menstruation. Shallot is one of the best sources of manganese so include it in your daily diet to remain healthy.(10)

Two of the phytochemical compounds allium and allyl disulfide that are found in shallots have anti-diabetic properties, meaning that they help to control the levels of blood sugar within the body. This can be very helpful for diabetics who need to keep their blood sugar levels under control.(11)

Other Traditional uses and benefits of Shallot

Scientifically referred to as Allium cepa or even Allium ascalonicum, Shallots belong to the Amaryllidaceae family and therefore are associated with the Lily family and onions. There are the French Grey Shallots(Ascium ascalonicum) that are regarded as the true shallots. Those are the yellow shallots such as the Griselle and yellow shallot. However it is the French shallot which is the most sought after. The american red shallot doesn’t have the same flavor as a french shallot. Additionally, there are the banana shallots that are copper colored as well as longer in size than the usual normal shallot.

Even though less in severity compared to onions, raw shallots may cause irritation to skin, mucus membranes, and eyes. Simply because release of allyl sulfide gas while chopping or slicing them that when comes in contact with wet surface will become sulfuric acid. Allyl sulfide is concentrated more in the ends, especially at the root end. Its result can be reduced by submerging the cut bulbs in cold water for some minutes before you decide to chop or slice them.