Trending
You are at:Home»Vegetables»Borage-Borago officinalis 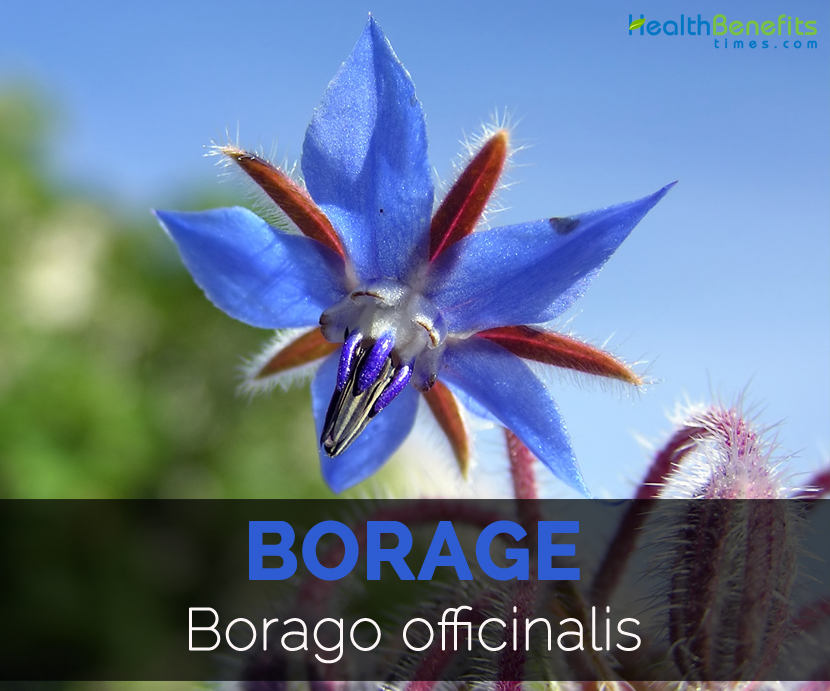 Borago officinalis is a species of the genus Borago L. in the family Boraginaceae native to Mediterranean region. Known as Starflower, it has acquired common names of Burrage, common bugloss, bee plant and beebread. There are more than 2500 species in this plant family. The oil which is extracted from Borage is known as Borage oil. It is an herbaceous annual plant growing to 2 feet high, with hairy stems and leaves. The leaves are alternate, 3-10 cm long and margined. Borage is a healthy plant with blue flowers which is grown commercially in order to extract oil from its seeds. The showy star shaped flowers attract bees and insects. The breeding takes place from the large black seeds. Some varieties of Borage are: Common borage, Variegata, Alba and Creeping borage.

Borago officinalis is an herbaceous herb, which is annual, fast growing and aggressive. The plants grow up to 2 feet in height and 2½ feet in width. The stem is erect, vertically grooved, hollow and 1 1/2 feet high. The leaves form upon the stem and are alternate, margined, elliptoid-ovate, pubescent or hairy, 3-10 cm long and are deep green in color. The flowers are star shaped and blue but sometimes it might be white or pink in color. The nuts are keeled, elongated to ovate with light brown rough skin which is 7-10 mm long.

Native to Mediterranean region, today it is extensively cultivated all over North America and Europe.

In early 19th century, the young flowers were used as pot herb in salads and wine. In UK, Borage was grown for at least 1200. The young leaves were used in salads. It taste is much like cucumber, and leaves which are steeped in water are consumed as a refreshing drink.

Borage has been widely spread to the world. It grows primitive in European countryside. In Roman and Greek times, it was thought to eliminate melancholy. The Greeks place it in wine cups to enhance courage.

Borage is loaded with various amounts of nutrients, minerals and vitamins which provide enormous health benefits. It enhances an immune system and soothes inflammation. The plant as well as the oil extracted from the plant both is equally useful. It also possesses anti-inflammatory, diuretic, galactogogue and emollient properties.

The chewing of leaves of Borage helps to provide relief from sore throat, cold, painful sinuses and stuffy nose. The compound in this herb helps to wipe out the phlegm and mucus from the respiratory tracts and also clears sinuses. It also enhances the immune system by preventing the development of pathogens and bacteria in the tracts. (1)

Indian borage is used to treat the various skin conditions such as stings, bug bites, psoriasis and eczema. It possesses anti-inflammatory properties that help to reduce the swelling and redness by eliminating the irritation as well as itchiness. (2)

The essential oil which is extracted from the Indian borage leaves contains the omega 6 fatty acids such as gamma- linoleic acid which helps to reduce arthritis by increasing the regeneration of joints that is essential for the athletes or people with osteoporosis who has stress on bones and joints. (3)

Indian borage leaves possess high amount of ascorbic acid which helps to enhance the immune system. Vitamin A and carotenoids enhance the vision with the reduction of oxidative stress in eyes and also prevent the macular degeneration. (4)

The research shows that Indian borage showed the positive results in the treatment of breast cancer but the studies are still going on. The antioxidants and omega-6 gamma-linoleic acids helps to slow down the breast cancer growth. It also has effect on the prostatitis which is the indicator of prostate cancer. (5)

The minerals and organic compounds contained in Indian borage possess the sedative properties. The tea made from Indian borage helps to reduce chronic stress or anxiety and promotes peace of mind, relaxation and sound sleep. (6)

Indian borage possesses diuretic properties which clear out the toxins by promoting urination. It also lowers the excess fat, salt and water contained in the body. It enhances the function of lymphatic system and kidneys as well. (7)

Flu and cold are the common symptoms of fever. Indian borage enhances sweat, clear toxin from the body and also speeds up the recovery process. (8)

Traditionally, Indian borage was used to soothe upset stomachs and provide relief from the bowel syndromes by soothing inflammation and regulating digestion. The effective way of getting benefit from the Indian borage leaves is to brew it as a tea. (9)

Borage oil contains GLA which acts as an aid for pain caused due to rheumatoid arthritis. It is mostly effective when used with anti-inflammatory medications or conventional painkilling. The evidence shows that some people experience reduction in joint pain, severity and swelling with the treatment of borage oil for six weeks daily.