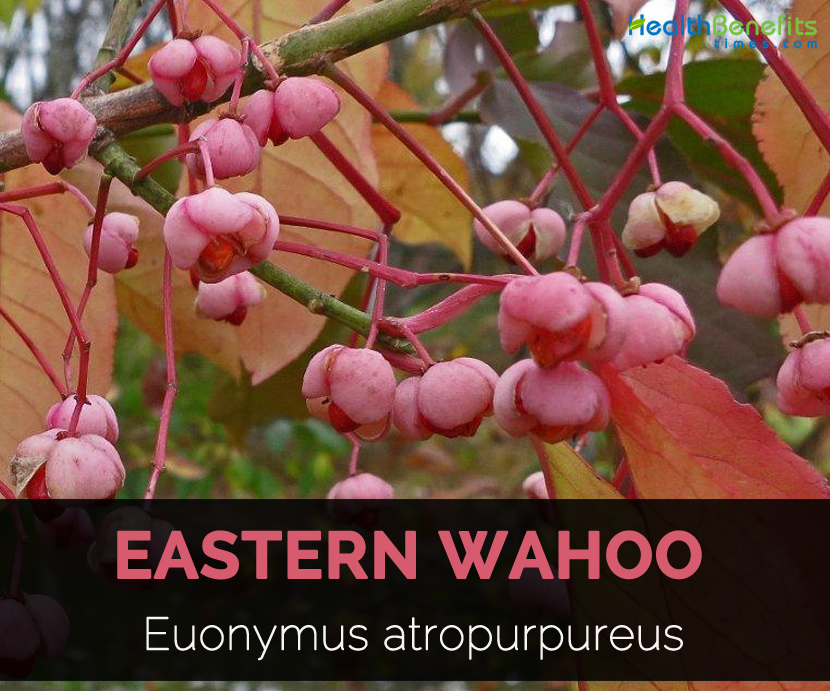 Wahoo in botany is a name of American Indian origin, most commonly applied to a large shrub, or small tree, 6–25 ft. tall native to North America. (The name Wahoo is also given to an Elm (Ulmus alata) and another variety, Euonymus americanus.)

Eastern Wahoo has obtusely four-angled twigs; leaves, 2–5 in. long, oval in shape, with finely toothed margins and covered below with fine hairs. The purple flowers, appearing in May or June, are about ½ in. across are borne in groups of seven to fifteen on a short stalk. The fruit is a deeply four-lobed purple capsule bearing brown seeds covered with a scarlet aril. The plant grows in many sections of the United States, in woods and thickets and river bottoms. The bark of the root has a bitter and unpleasant taste.

Eastern Wahoo is a deciduous shrub or small tree which is grown for its attractive red berries and fall color. It occurs in the wild in open woods and thickets, near streams and on wooded slopes throughout the States. It typically appears as an upright, spreading, deciduous shrub with an irregular crown growing from 10 to 15 feet high. Leaves are dark green, elliptic to ovate which turns dull red to greenish red in fall. Flowers are small, purple which appears in leaf axils in late spring but are not showy. Flowers give way to scarlet red fruits about ½ inches which are found in autumn. Fruits are attractive to wildlife and are considered to be the best ornamental feature of the shrub. Fruits, leaves and bark of Eastern wahoo are used for various medicinal purposes.

Flowers form in branching clusters of 7 to 15 flowers that arises from leaf axils of lateral branchlets along one year old stems. Flowers are ¼ to 1/3 inch across, maroon to dark reddish-purple with four petals which are triangular and softly pointed at the tip. The center of the flower has a four lobed maroon to purple ovary with single short and yellow stamen on each lobe and stubby green style in the center. The flowers have four short sepals. Sepals and stalks are hairless.

Leaves are opposite and simple about 2 to 6 inches long, 1 to 2½ inches wide which are generally elliptic, widest at or near the middle tapering or wedge shaped at the base. Tip is pointed or tapering to a sharp point sometimes abruptly so finely toothed around the edges and hairless on the upper surface and finely hairy on the lower. Stalks are ¼ to 2/3 inch long and hairless. Leaves turn yellow in the fall. Branchlets are weakly four sided, hairless, green and develops lines of pale and corky tissue along the angles which provides a striped appearance but eventually fade away. Branches are brown with age. Buds are cone shaped with sharply pointed tip. Bud scars are very light and nearly white. Older bark is thin, smooth to slightly rough and gray to gray brown. Trunks reach 1½ inches diameter at breast height. Usually stems are single and branches are few and erect to ascending, the shrub taking on an irregularly shaped crown.

Fruit is a capsule about ½ inches across. Initially it is green turning pinkish and maturing to red. Typically four lobed but not all lobes may develop equally. When ripe, capsule splits open revealing 1 to 4 fleshy and bright red fruits called arils which contain two seeds.

It is primarily found in the Midwestern United States. The range extends from southern Ontario south to northern Florida and Texas. It is found in low meadows, open slopes, open woodland, stream banks and prairies, in moist soils especially thickets, valleys and forest edges.

Valued in liver disorders especially those following or accompanied by fever. For constipation due to inactivity of liver it may be given with every confidence, especially as its action is mild and non-irritant. The influence is not restricted to the liver alone, the pancreas and spleen are also assisted by its properties. An effective agent for dropsy and dyspepsia, having cathartic effect. Euonymus is often used in combinations of other tonics, laxatives, etc., in pill form.