Trending
You are at:Home»Vegetables»Fireweed – Epilobium angustifolium 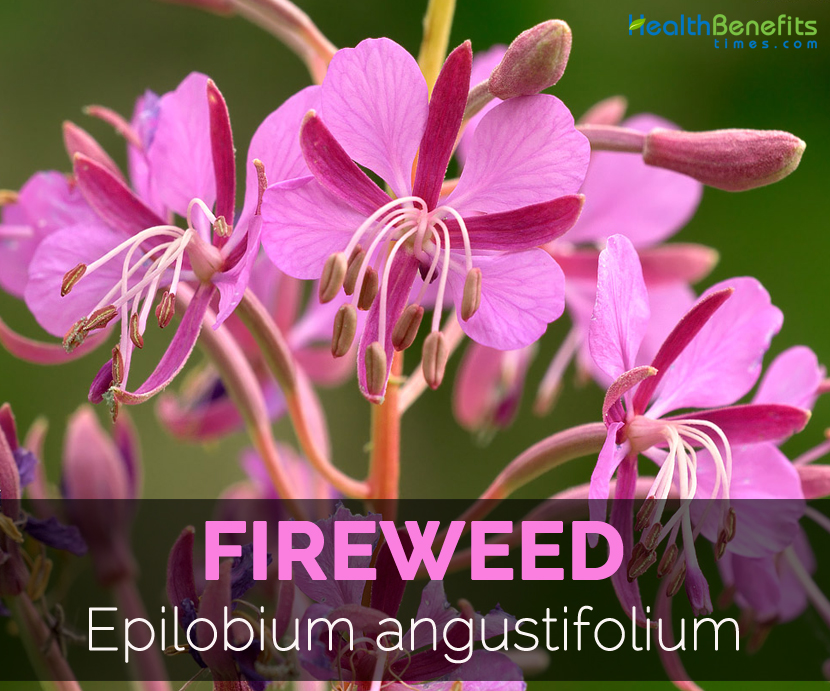 Epilobium angustifolium, commonly known as Fireweed, is the flowering plant in the family Onagraceae. It is native to Temperate Northern Hemisphere. The First Nations of North American people used it as a cooked vegetable or fresh, substitute for tobacco and applied as a poultice to treat infections. As Fireweed possesses anti-inflammatory properties it is used to treat the skin problems such as mouthwash, diaper rash and sore gums.

Fireweed is a perennial herbaceous plant, 2-9 ft. (0.6-2.7 m) tall which is found growing in semi-shaded forested areas and in sunny meadows and tends to grow in all types of soil but normally it prefers well-drained soils. It has wide spreading horizontal roots extend down vertically to 17.7 inches (45 cm) from the plant, with most growing between 0 and 5.9 inches (0-15 cm) deep whereas purplish-red stems that are simple, erect, smooth, 0.5–2.5 m (1½–8 feet) high.

Fireweed is a perennial herbaceous plant in the Asteraceae that is native to Australia and New Zealand and has been naturalized in northern USA (in the states of Washington, Oregon and California). It is considered a problem invader in the Channel Islands, California, and USA. It is able to rapidly colonize and dominate disturbed areas such as those cleared by logging activity or fire. Along with other nonnatives, it is possibly threatening native species in California. Nowadays it is found growing throughout the world because of its high nutrient content and wonderful use in the food item.

The flowers attract bees and hummingbirds due to its ragged appearance. Fireweed provides food to some animals as well as healing properties to the humans. Fireweed is used to treat swelling, inflammation, wounds, tumors, fevers and enlarged prostate. Some of the health benefits are described below:

Manganese helps in the growth of bone structure. It aids the increase of mineral density in spinal bones in post-menopausal women. After menopause, women suffer from deficiency of manganese so the minerals consumption should be increased to prevent the fractures. The manganese has the ability to prevent osteoporosis and slows down the growth of debilitating disease. (1)

Manganese helps to control the sugar level in the human blood which also prevents from the diabetes. Manganese normalizes the secretion and synthesis of insulin as well as regulating unpredictable drops in the blood sugar which provides normal life for the diabetic patients. (2)

Manganese helps to regulate the metabolism of body. It activates the enzymes which assist metabolizing amino acids, carbohydrates and cholesterol. It is vital for metabolism of Vitamin B1 and Vitamin E. In addition, it assists in the proper function of liver. It is vital part of glutamine and DNA polymerase. (3)

Manganese helps to eliminate the headaches, mood swings, irritability and depression caused by premenstrual syndrome. The study shows that manganese helps to treat PMS symptoms. As the manganese has the impact on the function of hormones so it is better to take a suggestion from doctor. (4)

Manganese is a vital component of thyroxine which is an essential hormone for thyroid glands. The effective function of thyroid gland and the hormonal synthesis helps in weight loss, metabolism, appetite and efficiency of organs system. (5)

Vitamin B6 helps to regulate the homocysteine levels in the blood which could be obtained from the meat or protein sources. The high presence of homocysteine in the blood leads to inflammation, blood vessel disease and heart disease that may lead to heart attack.

The homocysteine level builds up in the absence of Vitamin B6 which could damage the lining of blood vessels. It leads in harmful buildup of plaque that results to stroke or heart attack. The study shows that the intake of Vitamin B6 with folate helps to reduce homocysteine levels and also heals the damage. Vitamin B6 helps to manage the cholesterol and blood pressure level which are the main causes for heart disease.

Vitamin B6 assists in the development and functioning of brain. The deficiency of Vitamin B6 affects the memory, cognitive impairment, dementia and Alzheimer’s disease. Vitamin B6 is required for making the hormones such as norepinephrine and serotonin which controls the concentration, energy and mood. The research shows that Vitamin B6 may be useful for the children with ADHD and improve their learning as well as behavior.

The research shows that Vitamin B6 has an impact on the production of GABA neurotransmitters and serotonin in the brain. These hormones help to control the mood and prevent pain, depression, anxiety and fatigue. It helps to prevent the mood disorders. Vitamin B6 helps to treat the brain diseases and uplifts the mood, avoid lack of energy, concentration and experience less pain.

The deficiency of nutrient and poor diet are the main causes of eye diseases. The study shows that Vitamin B6 with other vitamins such as folate helps to prevent the vision loss and eye disorders. Vitamin B6 helps to slow down the growth of macular degeneration which is the age related disease.

Vitamin B6 is essential for the creation of hemoglobin in the blood which is passed by red blood cells in the body in order to transport the oxygen to the cells and utilize iron. Anemia is caused due to the low presence of red blood cells and results the symptoms such as aches, fatigue and pains. The study shows that the consumption of Vitamin B6 reduces the symptoms of anemia and also prevents it from occurring.