Trending
You are at:Home»Herbs and Spices»Facts and benefits of Gravel Root 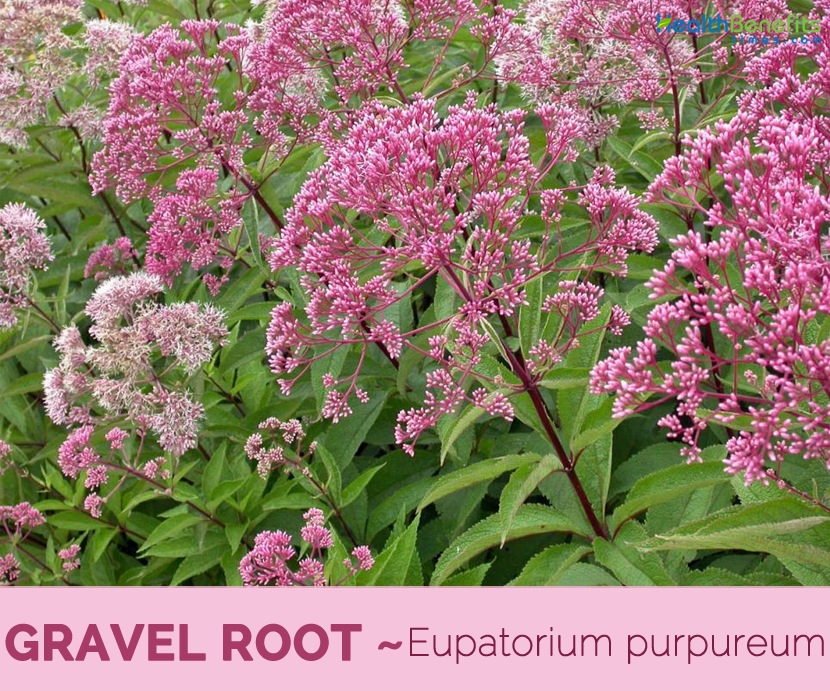 Eutrochium purpureum, commonly called Gravel root, Green-stemmed joe-pye-weed, Joe-pye, Joe-pye weed, Marsh-milkweed, Purple Joe-pye-weed, Purple Boneset, Queen-of-the-meadow, Sweet joe-pye-weed, bluestem, sweet scented joe pye weed, trumpet weed, gravel weed and Jopi weed, is an herbaceous perennial plant in the sunflower family. The plant occurs in low moist ground, wooded slopes, wet meadows and thickets and stream margins throughout northwest, eastern and central North America, from Ontario east to New Hampshire and south as far as Florida, Louisiana, and Oklahoma. Genus name is derived from the Greek words eu meaning well and troche meaning wheel-like in reference to the whorled leaves. Throughout history, many cultures have used gravel root as a remedy for an assortment of health complaints. Many of the bioactive compounds responsible for gravel root’s benefits are beginning to be analyzed by the scientific community in order to validate the age-old claims.

Gravel Root is a large, herbaceous perennial plant that grows about 1.5 – 2.4 meters (5 – 8 feet) tall and about 1.2 meters (4 ft.) wide. The plant is found growing in open woodlands, savannas, woodland borders, thickets, partially shaded seeps, partially shaded riverbanks, low moist ground, wooded slopes, wet meadows and thickets and stream margins and prefers ordinary garden soil that is well-drained but moisture retentive. The plant has shallow and fibrous root system and upright, thick, round, and purple stem, with whorls of leaves at each node. Central stem is light green and glabrous, except where the whorls of leaves of occur, where it is slightly swollen and purple.

Leaves are about 6 inch long and 3½ inch across or sometimes larger; they are broadly lanceolate or ovate and crenate-serrated along the margins. Each leaf is dull green and hairless on the upper surface; the lower surface is pale green and hairless to finely pubescent.

Tiny, vanilla-scented, dull pinkish-purple flowers in large, terminal, domed, compound inflorescences bloom in mid-summer to early fall. Each flower cluster typically has 5-7 florets. Flowers are very attractive to butterflies. Flowers give way to attractive seed heads which persist well into winter. Each floret is replaced by a bullet-shaped achene with a small tuft of hair. These achenes are dispersed by the wind. Aerial parts, rhizome and Fresh root are used medicinally to cure several health ailments.

The common name of gravel root, Joe Pye Weed, is supposed to be the name of an Abenaki First Nation healer who saved the New England colonists from typhoid fever. Another probable source for its name the word ‘jopi,’ and apparently First Nations Abenaki name for typhoid fever and hence Jopiweed. Although it has been used as a mild diaphoretic its more commonly used name of Gravel root however provides a better indication of its more important traditional uses, to dispel small stones and sludge from the bladder. Cherokee nation used Gravel root in the treatment of joint disorders and urinary problems, and used the stem to suck water from shallow springs and to blow medicine into the nose. It has a smell resembling old hay, and a slightly bitter, aromatic taste, which is faintly astringent but not unpleasant. It yields its properties to water by decoction or spirits.

Whole plant, particularly the root, is astringent, diuretic, nervine and tonic. It works mostly on the genito-urinary system and the uterus. It is valuable as a diuretic and stimulant, as well as an astringent tonic; a tea made from the roots and leaves has been used to eliminate stones from the urinary tract, to treat urinary incontinence in children, cystitis, urethritis, impotence etc. Listed below are few of the popular health benefits of Gravel root

Gravel root derives its name for its ability to break down stones in the kidneys and other organs of the body. Native Americans traditionally used it for this reason believing that it could soften and dissolve kidney stones and promote their easy passage through the system. Despite this traditional use, there is no modern scientific proof available to confirm that it works and the only real evidence is anecdotal.

2. Good for Gout and Arthritis

Gout is an extremely painful condition that is caused when an excess of uric acid build up in the joints. It can affect the joints in the entire body but is more typical in the feet particularly the big toe. Traditionally gravel root has been used to cleanse the kidney and dissolve the build-up of uric acid though again.

There is no evidence that it works beyond the anecdotal. That is not to say that it is not very effective and despite the lack of research, we can learn a lot from a long history of usage. As well as being used to relieve gout, gravel root has also been used for rheumatism and arthritis.

Gravel root has famously been used for centuries to treat bladder infections and other conditions affecting the urinary tract. It has excellent natural diuretic abilities and a soothing, astringent effect on the urinary tract.

Gallstones are a common complaint affecting the gallbladder. They are not actually stones but hardened deposits which can gather in your digestive fluid. These crystalline deposits differ in size from a grain of sand to much larger golf ball-sized stones.

There is no scientific evidence that it will work but traditionally, gravel root has been used to dissolve these stones in the same way that it has been used to ease the passage of kidney stones and to prevent them from reforming.

Gravel root not only has potential benefits for humans but it might also be beneficial for your beloved pets. Dogs often suffer from kidney stones and according to online evidence you can use gravel root to treat your pets naturally.