Trending
You are at:Home»Herbs and Spices»Facts and benefits of Gentian 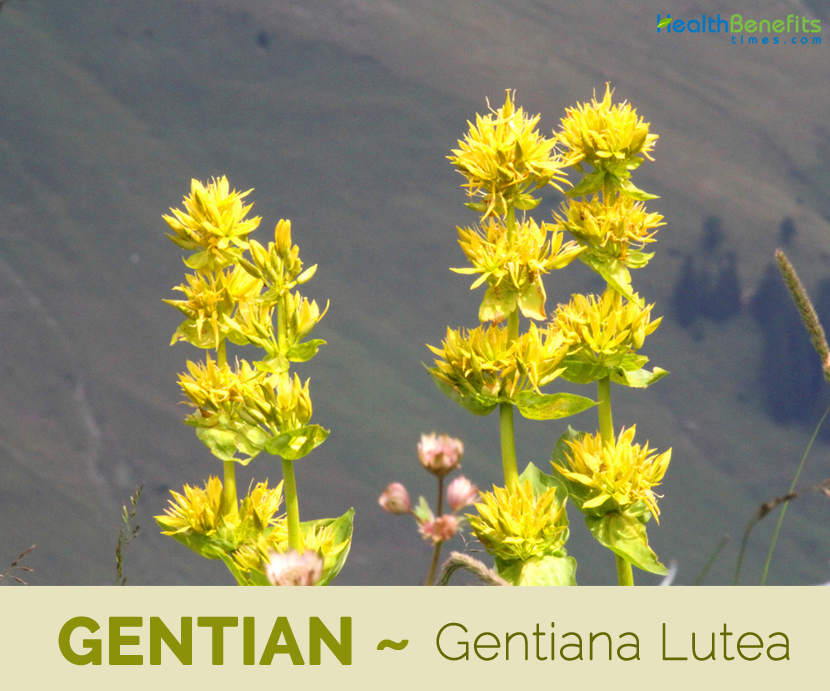 Gentian scientifically known as Gentiana lutea L is also known as Great Yellow Gentian, bitter root, bitterwort, centiyane, genciana, pale gentian, feltwort, gall weed and stem less gentian. It belongs to a large plant family known as Gentianaceae which consists of about 180 species. The plant is native to the Alpine and sub-alpine pastures of central and southern Europe, frequent in the mountains of Spain and Portugal, the Pyrenees, Sardinia and Corsica, the Apennines, the Mountains of Auvergne, the Jura, the lower slopes of the Vosges, the Black Forest and throughout the chain of the Alps as far as Bosnia and the Balkan States. It was named as a tribute to Gentius, an Illyrian king who was supposed to have discovered that the herb had tonic properties. He used the herb for treating wounds and as a natural antidote for various types of poisons. Traditional folk healers believed that gentian root could improve the digestive process by stimulating the flow of saliva, bile, and stomach acids if you took the herb before your meal. During the middle Ages, it was used as an antidote to certain poisons. Gentian is also known as “bitter root” or “bitter wort” because entire plant (especially root) has extremely bitter taste.

Gentian is an herbaceous perennial plant that grows about 1–2 m (3.3–6.6 ft.) tall. The plant is found growing in grows in grassy alpine and sub-alpine pastures and prefers loamy and calcareous, moist and well-drained soil. The plant has nearly cylindrical, sometimes branched, and longitudinally wrinkled roots. They are long and thick, generally about a foot long and an inch in diameter, but sometimes even a yard or more long and 2 inches in diameter. The root has yellowish brown color and has strong, disagreeable odor and taste slightly sweet at first, but afterwards very bitter. Stem is erect or oblique, cylindrical, and glabrous, flat and hollow that grows 3 or 4 feet high or even more.

The herb has broad lanceolate to elliptic leaves 10–30 cm (3.9–11.8 in) long and 4–12 cm (1.6–4.7 in) broad. Lowest leaves have short foot-stalks, but the upper ones are stalk less, their bases almost embracing the stem. They are yellowish-green in color with five prominent veins on the underside, and diminish gradually in size as they grow up the stem.

Large flowers are in whorls in the axils of the uppermost few pairs of leaves, forming big orange-yellow clusters. Corollas are wheel-shaped, usually five-cleft, 2 inches across, sometimes marked with rows of small brown spots, giving a red tinge to the otherwise deep yellow. Flowering normally takes place from Jul to August. Later he plant produces oblong or oval capsules which consists of oval, wingless, brown, and shiny seeds.  Whole plants mainly roots and rhizome are used medicinally since ancient times.  Traditional folk healers believed that gentian root could improve the digestive process by encouraging the flow of saliva, bile, and stomach acids if you took the herb before your meal. During the middle Ages, it was used as an antidote to certain poisons.

Ancient Greek and Roman herbalists, such as Dioscorides and Pliny, first recognized gentian as a treatment for animal bites, digestive issues, and fever. Its common name is reminiscent of the Illyrian king Gentius, who ruled the latter territory circa 180 BCE.

Gentian medicinal uses were later extended in the middle Ages, when the herb was recommended as an antidote for poison and as a metabolic enhancer. Several centuries later, British colonists brought the herb to North America, where by 1865 it had become the most popular cure for tobacco poisoning on the continent. The U.S. government officially permitted it as a bitter tonic until 1910, and today gentian remains popular among herbalists.

Since ancient times Gentian herbs were used medicinally and now it is gaining more popularity as many people are acknowledging the benefits of this herb. It is used as a natural cure for anorexia as well as exhaustion. It is also supposed that gentian herb is effective to improve the whole body system by encouraging the digestive system, circulation, important organs and many glands. Listed below are some of the health benefits of using gentian

Regular consumption of roots of gentian herbs helps to lower the risk of getting cancer cells. Gentian root is rich with important antioxidant properties that help to combat free radicals while protecting the healthy cells. More research is essential to conclude the effects of gentian roots for cancer patients.

Hysteria is an uncontrollable emotion or a disorder arises from intense anxiety.  People suffering from hysteria lose control over emotions and is commonly accompanied by seizures of unconsciousness. Other common symptoms include compressed teeth, severe cramps, swelling of neck, headache, crying or laughing without reason.

Gentian roots are quite helpful in the treatment of hysteria and can prevent it from occurring which can also improve health condition.

Gentian herbs have therapeutic and stimulating effects that can improve blood circulation. Gentian roots can energize the blood and circulate to all parts of your body by strengthening the whole cardiovascular system. This herb is also used to refresh tired tissues as many people described to feel less sluggish after consuming gentian roots.

Diarrhea is one of the acute problems that may lead to death if not treated right away. Symptoms include cramps, watery stools, nausea and throwing up, bloating, thin and lose stools, and urgent feeling to have a bowel movement.  Gentian herb is used to treat diarrhea so it can rescue you right away during the critical time. The herb is effective in preventing diarrhea as well as the symptoms associated with it.

Heartburn is the irritation of the esophagus caused due to stomach acid. Symptoms of heartburn or acid reflux are chronic cough and chest pain. It creates a burning discomfort in the abdomen and below the breast bone.

Stress, obesity, certain medications and specific foods are few of the reasons behind causing heartburn. Gentian is one of the effective home remedies for the treatment of heartburn. Other ways to treat heartburn is changing lifestyle, diet and medications.

Gentian herb is quite beneficial to lower high blood pressure. Regular consumption of this herb can lower the risky level of blood pressure while maintaining its proper level. This allows to body to steer clear from many health problems associated with high blood pressure such as stroke, diabetes and heart attack. It is best to consult your doctor before consuming gentian herbs in the form of powder, tea or tablet as there can be side effects for people suffering from high blood pressure.

Insufficient levels of iron in the body may cause Anemia. Gentian assists in stimulating the growth of leucocytes and red blood cells in the body while improving the immune system. Gentian roots are effective in encouraging the digestive system which can make it easier for the body to absorb more iron. It is also important to take foods rich with iron while treating with gentian.

Gentian herbs have antiseptic and antispasmodic properties that can relieve muscular cramps of women during menstruation. Because of the antiseptic properties present in this herb, it is also used in treating rashes, bruises and wounds.

Loss of appetite can result to deficiency of nutrients that are necessary in order to keep your body healthy and moving. Lack of nutrition can make the body weak and lethargic. It may also lead to several health problems if attention is not given right away.

People who are not able to eat properly can take gentian herbs to increase their appetite. It is supposed that gentian is a natural herbal treatment for anorexia, exhaustion and gaining weight. The bitter constituents of this herb encourage the secretion of saliva and the production of gastric juice that helps to increase appetite.

Gentian herbs help to make the liver healthier, encourage the liver function and assist in regenerating the cells while increasing the flow of bile. This herb is also effective to prevent the growth of viruses that can cause liver malfunction.  Gentian herbs can also be mixed with other depurative herbal tinctures for more effective anti-oxidants. This can remove harmful chemicals and excess uric acid which can keep the liver and kidney healthy.

Gentian tinctures are also used for treating inflammation, diabetes, intestinal parasites as well as infection of the pancreas. Tincture is diluted in water for gastric and hepatic illnesses. Gentian’s hepatic properties can assist in regenerating hepatic cells that enhances the liver function.

Gentian herb is proven beneficial for people suffering from infections such as sinusitis. It can also be combined with other medicinal herbs like elder flower, verbena, sorrel and cowslip flower to make it more effective.

Spasms may affect different types of muscles which lead to different symptoms. For example, skeletal muscle spasms are caused by dehydration, over fatigue and electrolyte abnormalities. Spasms can be painful and usually brief and it is the common way of the body telling that the muscle cells need more water, potassium, magnesium, calcium, sodium and glucose. Many people use gentian supplements to treat muscle spasms right away.

As mentioned earlier Gentian helps to boosts your appetite so that your body gets required amount of nutrients. Insufficient amount of nutrition makes your hair brittle, rough and lifeless. You would suffer from hair fall etc. Consume gentian to get dense, thick, lustrous and radiant locks.

16. Get Rid of Constipation

Being constipated means the bowel movements are hard or occurs less than normal. Constipation takes place due to dehydration, certain medications, irritated bowel syndrome, too much dairy products, inactivity and stress. Other causes are pregnancy, overuse of laxatives, colon cancer, change of usual diet and hypothyroidism. Gentian herbs are excellent for treating constipation and other digestive disorders such as upset stomach, flatulence, indigestion and other gastrointestinal problems.

Gentian herbs are rich with vitamins, minerals and antioxidants that make the body healthy. With the necessary nutrients and elimination of free radicals, the skin becomes more radiant. Antioxidants are also helpful in keeping the skin young looking and prevent the appearance of fine lines and wrinkles.

How to Consume Gentian

Because gentian is not often used in a culinary capacity, the most effective way of obtaining its health benefits is in medicinal forms of consumption, where the properties are more concentrated.