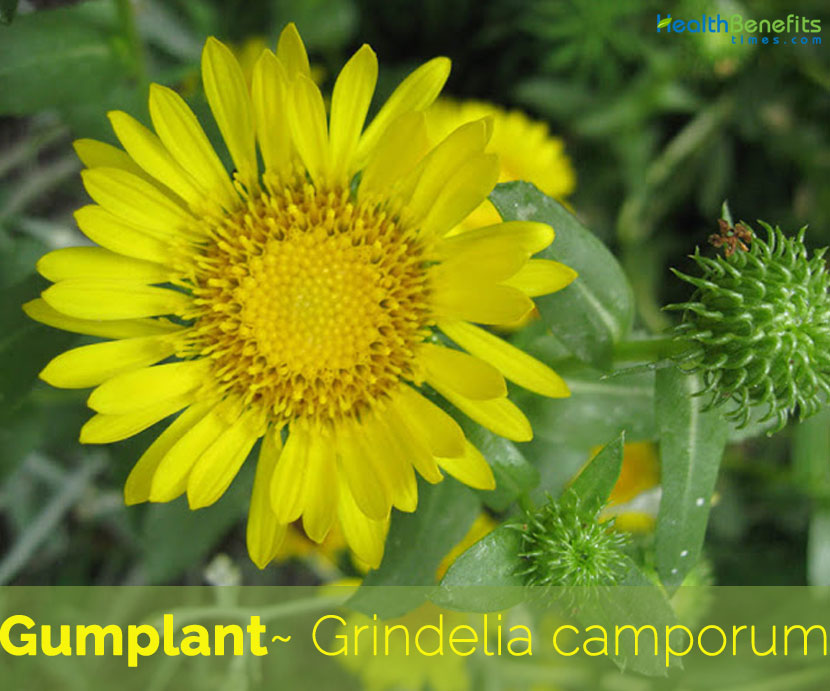 Grindelia camporum, also variously known as gumweed, gumplant, field gumweed and, simply, big California gumplant is a species of flowering plant in the Asteraceae ⁄ Compositae (Aster family). The plant is native to central California. It is found mostly in the Sacramento and San Joaquin Valleys. However, the plant may also be found to the east, across the North Coast Ranges and around the San Francisco Bay, north to the Cascade Range foothills, west along the Sierra Nevadas, and south along the outer Southern Coast Ranges into Baja California. There are historical records of introductions to Pennsylvania and Massachusetts.

The entire plant is hairless and may feel sticky because of its resinous pores. Mature plant has half a dozen or more erect, stiff, stems that can grow up to 3 feet tall depending on the species. Each stem typically has 6 or more branches in the top 2/3 of the plant. These branches then have up to 4 secondary branches. All branches terminate with a single flower head.

Leaves are medium green, alternate and clasp the stem.  They are thick, leathery and quite sticky. Leaves are lance-shaped (lanceolate) to ovate, alternate, and stalkless, often with clasping bases. They have entire or serrate margins, grow up to 2½ inches long and ½ inch wide, are slightly wider near the tip, and are dotted with stalked glands that produce a sticky resin. Foliage and flowers all have a strong, distinctive, resin-like aroma.  The basal leaves are largest (to 6 or 7 inches), oblong and usually sharply toothed.  Leaves become smaller and more elongated further up the stem.

Composite flower heads begin as a tight bud with a spherical burr-like appearance due to a whorl or rosette of closely spaced, linear to lanceolate bracts. Immature flower heads are spheroid and ooze sticky, white latex that gives them a milky appearance. When open, the daisy-like flower heads are 1 to 2 inches across and are composed of 25–39 yellow petal like ray flowers 1/3 to 4/5 inch long surrounding the yellow disk flowers in the center. Below the flower heads is the involcre, a whorled cup of sticky-glandular, green bracts (phyllaries) with long, thin tips that are spreading or sometimes curved back from the flower head. Flowering occurs in mid to late summer, typically beginning in July and continuing into September or later depending on climate conditions. The flower heads are stickier than other parts of the plant and are difficult to dry. It is most easily identified by the recurved bracts on the cups that enclose the flower heads. Bracts are strongly curved back and highly resinous.

Fertile flowers are followed by small, wind-borne, dandelion-like achene with featherlike tufts of two to several firms, but deciduous, awns. The seeds themselves are somewhat flattened, 3/8 inch long, and 1/16 inch wide. 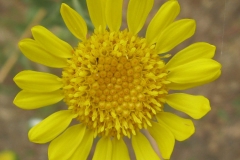 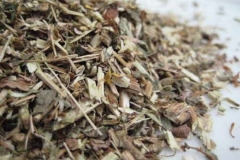 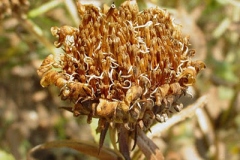 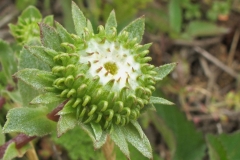 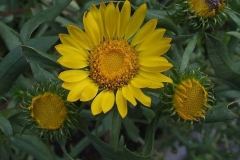 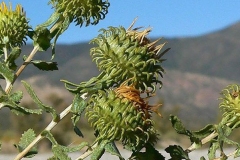 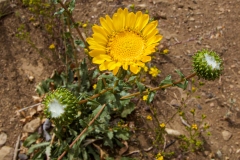 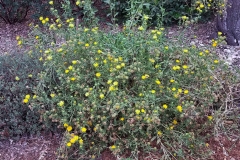 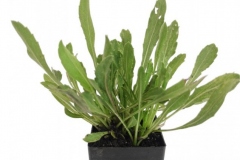 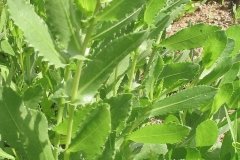 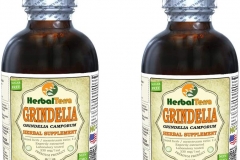 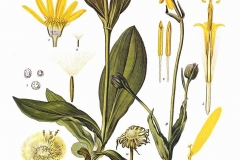 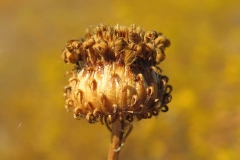 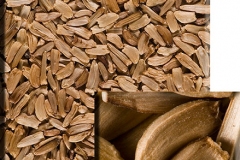 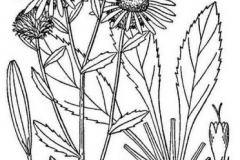 While there is not a great deal of scientific confirmation for the use of the herb, there is sufficiently of anecdotal evidence as well as many years of traditional use to rely on. Remember that the following uses are for information purposes and you should always consult your doctor before taking any herbal medications.

Gumplant herb has been used to treat congestion and other symptoms of the common cold like coughs and wheezing. It works as a natural expectorant and help break up the phlegm and mucus that frequently builds up when we have a cold. By loosening the mucus, it is easier for the body to expel through coughing. Grindelia also has anti-spasmodic properties that can help prevent spasms in the respiratory system and reduce the discomfort of coughing.

Gumplant has been used by the Native Americans as a natural remedy for bronchitis, emphysema as well as other conditions affecting the lungs. Little research has been carried out but it may work by allowing air to freely pass through the lungs of the patients. Furthermore, it aids in the elimination of obstructions of catarrh and phlegm. Which are in the passageway so to improve breathing.

Gumplant has also been used to help calm down the heart naturally and may have an effect similar to a beta blocker. By calming down the heart rate and improving its rhythm, the herb can also have a very positive effect on the mind.

Many people who suffer palpitations or irregular heart beat find themselves in a downward spiral when they start to feel anxious about their system. This can lead to uncomfortable feelings of anxiety. Natural beta blockers not only help you feel physically better but can also have a profound effect on your emotional well-being.

Gumplant herb has antispasmodic effect which can help relieve tension or spasms in the body’s muscles. This action can help soothe a range of bodily spasms including respiratory and digestive system spasms. It may also help soothe muscles in the limbs and help relieve cramping.

Gumplant can also be applied topically to help treat a range of skin complaints and has often been used as a natural remedy for dermatitis. Antibacterial and anti-inflammatory properties found in the plant make it an appropriate topical remedy for minor wounds, cuts, bites and stings. It can help prevent infection and soothe irritation and redness. The herb is also an effective remedy for reactions to poison ivy or poison oak.

Inflammation is the heart of the majority of diseases including serious illness like cancer and heart disease. Natural anti-inflammatory herbs can help reduce the risk of illness and may even help treat certain inflammatory conditions.

Gumplant consists of numerous flavonoids with antioxidant potential including kaempferol and quercetin. These antioxidants can help protect us against disease caused by free radical damage or oxidative stress. Antioxidants also have an anti-aging effect that may be noticeable externally by helping keep your skin looking younger and healthier.

Research has found that resin fractions and phenolic acids extracted from the herb were able to prevent the growth of various bacterial strains such as Bacillus subtilis and Staphylococcus aureus.

Studies have also found that Gumplant inhibited the growth of various fungi including Candida tropicalis, Trichoderma viride and Mucor mucedo.  Other studies have found that the essential oil from Grindelia camporum was effective against many fungal species.

Gumplant has traditionally been used to treat urinary tract infections and cystitis. There are no studies into its efficacy for UTIs but it may work because of its excellent antibacterial actions.

Gumplant prevents the growth of poison oak. This is due to the calming effects that it has on the skin.

Traditional uses and benefits of Gumplant