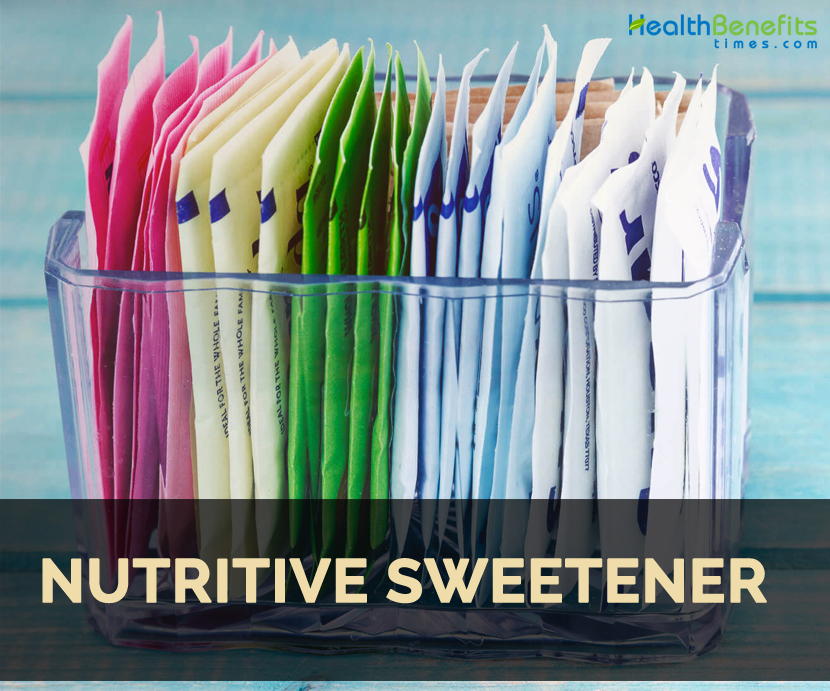 Nutritive sweeteners contain carbohydrate, usually sugar, and provide energy. They may be monosaccharides, disaccharides, or sugar alcohols (e.g., mannitol, sorbitol). Nutritive sweeteners can be found naturally in foods such as fruits, vegetables, and dairy; can be added to foods such as baked goods, salad dressings, and peanut butter; or can be consumed by themselves.

The most common nutritive sweeteners, or “sugars,” are glucose, fructose, galactose, sucrose, maltose, and corn-based sweeteners such as high-fructose corn syrup. While providing sweetness is a key function of these products, sugars also play a role in texture, volume, supporting yeast growth, balancing acidity, and enhancing crystallization. The Food and Nutrition Board of the Institute of Medicine recommends that no more than 10 percent of total energy intake should come from added sugars. Foods high in sugar tend to be processed, and though energy-dense, they usually are not nutrient-dense. It would be difficult to consume a large percentage of energy from sugar and still meet other macronutrient and micronutrient needs. The most common source of sugar in the U.S. diet is from sweetened beverages. On average, one 12-ounce can of soda contains almost 10 teaspoons of sugar. When you consider that many “servings” of soda available at fast-food restaurants, theaters, amusement parks, and other venues are 16 or 24 ounces, or even larger, you can see how the amounts of sugar really add up. Even moderate sugar consumption may contribute to a significant number of adverse health conditions, including cardiovascular disease, inflammation, diabetes, and obesity. Note that most research studies support a relationship between sugar consumption and health issues, and more data are needed to distinguish between added sugars, excess energy, and other dietary factors.

Some evidence indicates that overconsumption of sugar and other processed carbohydrates are associated with increased levels of low-density lipoprotein (LDL) cholesterol and triglycerides (blood fats), both risk factors for cardiovascular disease, and a reduced level of high-density lipoprotein (HDL) cholesterol—the kind that removes LDL from the arteries. This pattern, called dyslipidemia, is thought to increase the risk of developing cardiovascular disease. While there is not enough evidence to say with certainty that sugar or processed carbohydrates promote heart disease, it is prudent to be concerned if one has this pattern. Note that dyslipidemia is primarily a concern for individuals who are overconsuming sugar and carbohydrates compared to their energy expenditure. The concern might not apply (at least not to the same degree) to athletes consuming large quantities to fuel a sport or activity.

Though much of the research on diet and inflammation has focused on fats, it does appear that carbohydrate plays a role as well. High consumption of highly refined carbohydrates—that is, those made from white flour and sugar—are associated with increased blood glucose levels and accompanying inflammatory messengers called cytokines. On the other hand, it also appears that replacing refined carbohydrates in the diet by consuming larger quantities of plants in the form of fruits and vegetables may help limit these inflammatory markers.

No indisputable scientific evidence implicates sugar consumption as a direct cause of diabetes mellitus; however, people who already have diabetes must learn to modify their carbohydrate intake and balance it with insulin or oral medications and exercise in order to keep their blood glucose levels under control. Some athletes who participate in rigorous sports also have diabetes, yet they still require large amounts of carbohydrates and have the unique challenge of eating enough carbohydrates to fuel their activity while maintaining blood glucose balance.

While more data are needed to establish a cause-and-effect relationship, some observational and controlled research studies report weight loss with reduced intake of sugars, and weight gain with increased intake. Similarly it appears that sugar consumption might play a role in obesity development in children, with those consuming one or more sugar-sweetened beverages a day having a higher risk of becoming overweight. Many of the studies agree that it is the excess energy from the sugar contributing to the weight gain rather than the chemistry of the sugar molecules themselves. Excess energy in any form can contribute to weight gain, so if a person is consistently consuming more sugar than they are using as fuel or storing as glycogen, fat gain will result over time.