Trending
You are at:Home»Herbs and Spices»Uses and Benefits of Holly 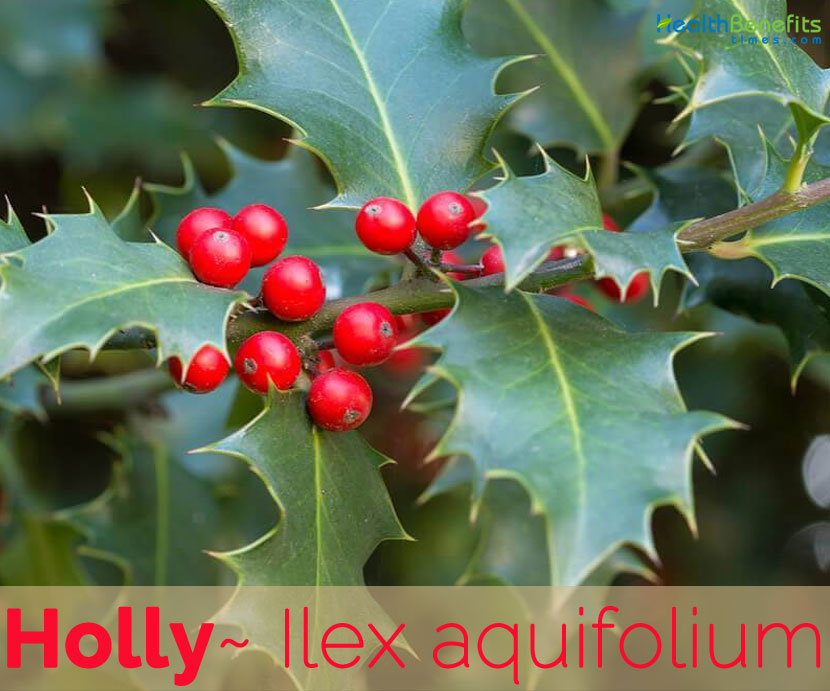 Ilex aquifolium, popularly known as holly, common holly, and English holly is a species of flowering plant belonging to holly family (Aquifoliaceae). The plant is native to northern Africa (i.e. Algeria, Morocco and Tunisia), western and southern Europe (i.e. the UK, France, Portugal, Spain, Albania, Bulgaria, Italy and Yugoslavia) and western Asia (i.e. Iran, Syria and Turkey). It is regarded as the type species of the genus Ilex, which by association is also called “holly”. In the British Isles it is one of very few native evergreen trees. It has a great capacity to adapt to different conditions and is a pioneer species that repopulates the margins of forests or clear-cuts.

Holly is a large, slow-growing evergreen tree or shrub that normally grows about 10–25 m (33–82 ft.) tall with a woody stem as wide as 40–80 cm (16–31 in), rarely 100 cm (39 in) or more, in diameter. The plant has a pyramidal crown, which branches from the base. The bark of the young branches is green and shiny but light gray on older branches and stems. The wood is hard and dense and is often used for wood cutting. Twigs are greenish to purplish. The plant is found growing in Forests, forest edges, scrub- and woodland, hedges, thickets, second-growth forest, roadsides and open ground. The plant prefers acid, sandy or gravelly loam soils and found in most well-drained soil. The younger stems are green and covered in fine hairs (i.e. finely pubescent), while older stems quickly become hairless (i.e. glabrous).

The thick and leathery leaves are alternately arranged on the stems and are borne on stalks (i.e. petioles) 5-15 mm long. These leaves are 5–12 cm long and 2–6 cm wide and are roughly oval (i.e. oblong-elliptic) in shape with wavy (i.e. undulate) margins and pointed tips (i.e. acute apices). In the young and in the lower limbs of mature trees, the leaves have three to five sharp spines on each side, pointing alternately upward and downward, while leaves of the upper branches in mature trees lack spines and may even have entire and flat margins. Their upper leaf surfaces are dark green and glossy, while their undersides are paler in color and duller in appearance. Leaf margin may be undulate with spines, especially in the lower part of the tree.

The leaves have neither taste nor odor. They remain attached to the tree for several years, and when they fall, defy for a long time the action of air and moisture, owing to their leathery texture and durable fibers, which take a long time to decay. 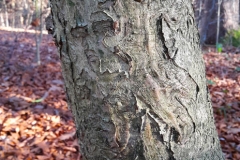 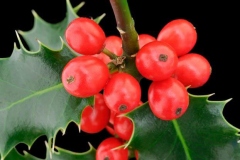 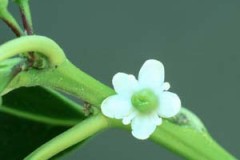 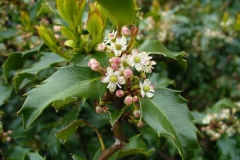 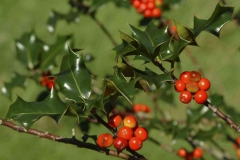 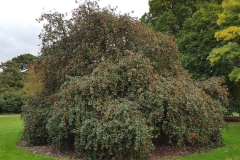 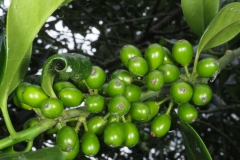 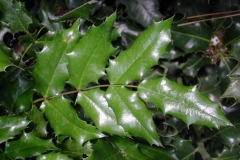 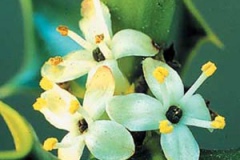 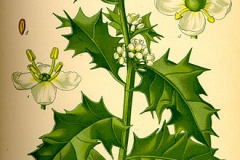 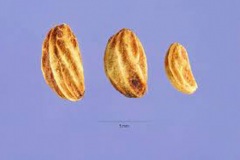 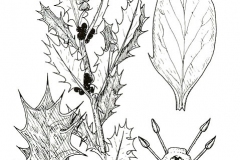 Small flowers are about 8 mm across and are usually borne in three-flowered clusters (occasionally 1-6 flowers in each cluster), which are thickly arranged into larger clusters in the leaf forks (i.e. axils).  The plant is dioecious, meaning that there are male plants and female plants. The sex cannot be determined until the plants begin flowering, usually between 4 and 12 years of age. Separate male and female flowers are borne on separate plants. All flowers are borne on very short stalks (i.e. pedicels) up to 2 mm long. They have four tiny sepals which are about 1.5 mm long and four white or pinkish petals that are 2-5 mm long. The male flowers are yellowish and appear in axillary groups and have four stamens and a rudimentary ovary, while the female flowers are isolated or in groups of three and are small and white or slightly pink, and consist of four petals and four sepals partially fused at the base and have four partially formed stamens (i.e. staminodes) and an ovary topped with a short style and a globular stigma. Flowering occurs mainly during May to June.

The fruit only appears on female plants, which require male plants nearby to fertilize them. The fruit is a berry like drupe (stone fruit), about 6–10 mm in diameter. These rounded or egg-shaped fruit turns from green to bright red or bright yellow in color as it matures around October or November. At this time they are very bitter due to the ilicin content and so are rarely eaten until late winter after frost has made them softer and more palatable. They are eaten by rodents, birds and larger herbivores. Each fruit consists of 3 to 4 seeds which do not germinate until the second or third spring. The light brown or yellowish seeds are either smooth or ribbed. The fruit can remain on the tree for the whole winter if not eaten by birds.  Blackbirds are often seen flying out of our holly trees this time of the year when they are disturbed by curious dendrologists.

Traditional uses and benefits of Holly