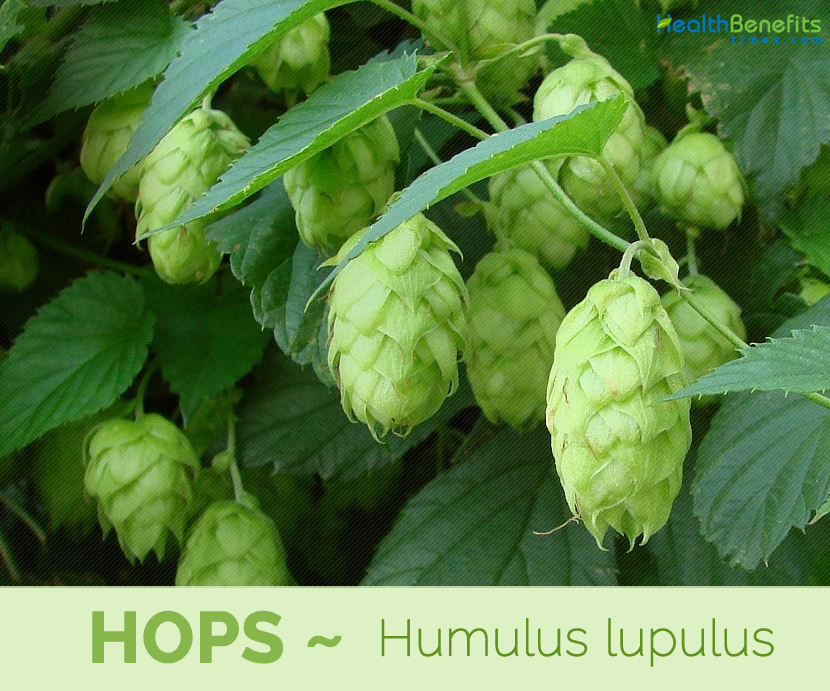 Hop (Humulus lupulus), a member of the Cannabaceae family, is an herb that was traditionally used to provide relaxation, sedation and treat insomnia. This perennial climbing vine is native to Europe, western Asia and North America.  Being a temperate European plant, hops is grown in Czech Republic, Poland, England and Germany. It is also found in the United States, South America and Australia. Apart from hops it is also known as Asperge Sauvage, Common Hops, Couleuvrée, Couleuvrée Septentrionale, European Hops, Hop, Hop Strobile, Hopfenzapfen, Houblon, Humulus lupulus, Lupuli Strobulus, Lupulin, Lúpulo, Pi Jiu Hua, Salsepareille Indigène and Vigne du Nord. Hops are actually a female inflorescences of the plant Humulus lupulus L. They are used mostly in beer brewing to add bitterness and flavor. Hops are also used as an herbal medicine for mood disturbance and insomnia and to treat menopausal symptoms.

Hop is a dioecious, rhizomatous, vigorous, twining perennial, herbaceous climbing vine or plant that grows about 7 meters tall. The plant is found growing in woodland Garden Sunny Edge, Dappled Shade, Shady Edge and Hedgerow and normally grows in average, medium moisture, well-drained soils. It also prefers moist, rich soils, but has some tolerance for drought as well. It has stout and perennial root systems. Stem is of a twining nature, reaching a great length, flexible and very tough, angled and prickly, with a tenacious fiber.

Opposite leaves are up to 6 inch long and 4 inch across; smaller leaves are usually oval-cordate in shape, but larger leaves are palmate with 3 lobes (rarely with 5). These leaves have a rough texture and coarse serration along the margins; they are medium green or yellowish green on their upper surfaces, and whitish green below. The long petioles are light green or light tan, stout, and prickly-bristly. At the base of each petiole is a pair of lanceolate stipules.

Flowers are dioecious, i.e. male and female flowers are on separate plants. The male flowers are in loose bunches or panicles, 3 to 5 inches long. The female flowers are in leafy cone-like catkins, called strobiles. When fully developed, the strobiles are about 1 1/4 inch long, oblong in shape and rounded, consisting of a number of overlapping, yellowish-green bracts, attached to a separate axis. Flowering normally takes place from Jul to August.

The fruit of the female plant is called strobiles and resemble small pine cones. When fully ripened the strobiles measure about 1 1/4 -2 inches long, in a rounded, oblong shape with a number of overlapping, yellowish-green bracts, attached to a separate central point containing a small fruit (achene) at the base. Both the bracts and achene contain the bitter principle lupulin, which gives hops its tonic qualities. Strobiles are typically collected in September-October with the seeds dried for use in the manufacture of beer. Flowers emit a pine-like fragrance and are attractive to butterflies.

The five varieties of this species (Humulus lupulus) are:

Beer and hop in basket

Hops plant consists of a variety of essential oils as well as various minerals and vitamins that give them their therapeutic benefits. Essential oils found in hops are myrcene, caryophyllene, farnesene and humulene. Vitamins found in hops include vitamins C, E and B6. These nutrients have powerful antioxidant properties which can help protect the body from disease, boost the immune system and slow down the body’s aging process. Listed below are few of the health benefits of Hops

Research concluded that the xanthohumol present in hops is quite beneficial against certain types of cancer. So far, they have found it was effective against colon, ovarian and breast cancer cells. There are also indications that the compound may help prevent the development of prostate cancer. (1)

Xanthohumol found in hops is quite effective on heart health. Several research has discovered that it possessed powerful antiplatelet activity. Researchers concluded that it may have a role to play in the prevention and treatment of cardiovascular disease.(2)

Studies have found that hops have chemicals that act like estrogen. These chemicals help to relieve symptoms of hormonal changes which occur because of menopause.

Research done on 100 post-menopausal women found that a vaginal gel using hops as one of the major ingredients reduced dryness in the vagina. It also helped relieve painful intercourse, burning, itching and vaginal inflammation.(3)

Recent research has concluded that the compound found in hops may help protect the brain’s cells from oxidative stress. According to the researchers, this type of oxidative stress can lead to degenerative disorders such as Parkinson’s and Alzheimer’s disease. Another research concluded that xanthohumol may protect the brain from damage and reduce the risk of various brain disorders.(4)

Hops have traditionally been used to help with sleep issues and several studies have evaluated its effectiveness as a sleep aid. Several research has found that hops were effective in promoting sleep in combination with valerian herb. The study found that the participants who drank non-alcoholic beer containing hops experienced much improved quality of sleep compared with the control group.(5), (6)

Inflammation and irritation are responsible for most of the common respiratory disorders. Using aromatherapy with hops essential oil helps reduce inflammation and soothe the irritated parts of your respiratory tract. Thus, it effectively reduces coughing and congestion too.

Due to its sedative abilities, Hops have been traditionally used to ease feelings of anxiety and stress. Studies have also showed that hops are more effective as a sedative when used in combination with valerian.(7), (8)

Hops essential oil helps to ease tension and the symptoms of headache. Soothing and sedative effects help to loosen the muscles of your shoulders and the neck while helping relax the mind and providing relief from mental conditions like paranoia and dementia. Apart from that soothing effect allows you to end your headache woes and helps you start your day with renewed energy!

Flavanoid – xanthohumol extracted from hops helped reduce body weight and fasting glucose levels in obese rats. Researchers also concluded that the results demonstrated the extract may have a beneficial effect on some of the symptoms of metabolic syndrome.(9)

Hop extract can also be directly used to wash your hair. First, rinse the hair with a mild shampoo, then use hop extract on the scalp. It is helpful in the treatment of scalp and dandruff. Essential vitamins and oils present in the hops help to open the tiny pores of the scalp and reduce the hair loss. The oils in this herb help to cure the dead skin on the scalp and remove dandruff, which blocks the pores of the scalp. It is easily available in the market, but can also be used directly from beer, which has high contents of hops.

Kidney stones are caused by a buildup of calcium in the body. Hop supplements can help reduce your body’s level of calcium and prevent the formation of these painful stones.

Anti-inflammatory property of hops provides relief from a toothache and other oral diseases. It can be used in several different ways to cure many diseases. The benefits of hops are not just limited to its beer making. It is also used as an active ingredient in flavoring yeast, which is further used in different medicines and baking products.

Hops essential oil’s soothing properties and sedative effect help to ease menstrual cramps and pain. The sedative quality helps loosen the muscles and reduces pain. It can help you naturally overcome the discomfort during menstruation!

Hops consist of organic compounds that are thought to help fight osteoporosis and even help keep it from developing in the first place. Research has shown that drinking beer, hop tea or taking a hops supplement can help fight bone loss and even reverse the process. Another benefit for those with osteoporosis is that hops seem to fight inflammation within the body.

Traditional uses and benefits of Hops