Trending
You are at:Home»Herbs and Spices»Health benefits of Indian Borage 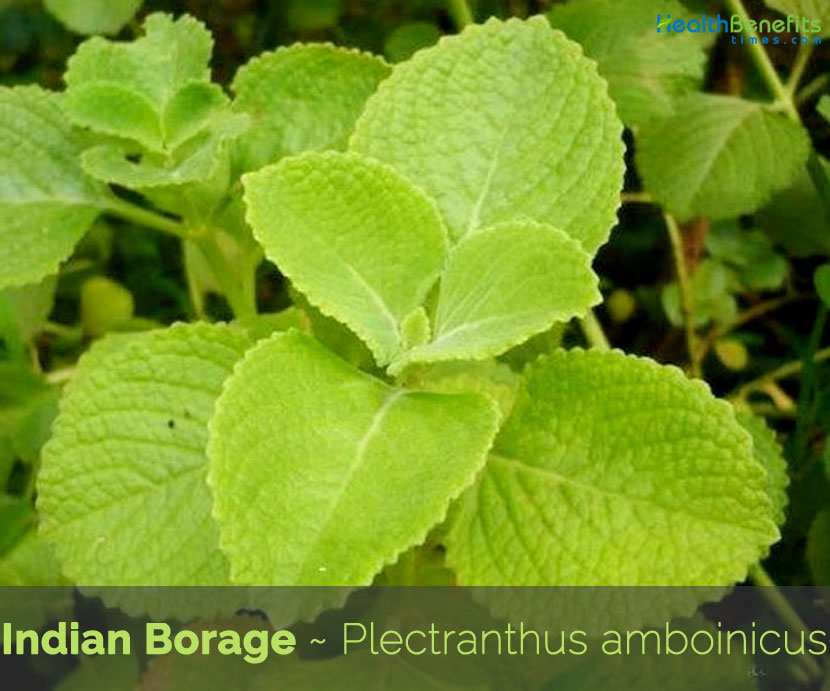 Plectranthus amboinicus, once recognized as Coleus amboinicus, is a semi-succulent perennial plant in the family Lamiaceae which includes common herbs such as basil, mint, oregano, sage, rosemary, and thyme with a pungent oregano-like flavor and odor. The plant is native to Southern and Eastern Africa, from South Africa (KwaZulu-Natal) and Swaziland to Angola and Mozambique and north to Kenya and Tanzania. It is widely cultivated and naturalized elsewhere in the tropics where it is used as a traditional medicine, spice, and ornamental plant. Few of the popular common names of Indian Borage includes Cuban oregano, Country borage, French thyme, Indian borage, Indian mint, Mexican mint, Soup mint, Spanish thyme, Thick leaf thyme, broad leaf thyme, Mexican Mint, Coleus amboinicus, poor man pork or broad leaf thyme, queen of herbs, three-in-one herb, allherb, mother of herbs and orielle.

The name Plectranthus derives from the Greek words “plectron”, meaning spur, and “Anthos”, meaning flower, in reference to the spur-shaped flowers of some members of the genus. Due to lack of precise morphological features to differentiate species within the genus Plectranthus and its closely associated genera, numerous taxonomic problems with the naming of species have resulted in misplacement of species in some closely linked genera such as Coleus, Solenostemon and Englerastrum. The species epithet “amboinicus” is derived from Ambon, an island in the East Indies where Rumphius, a well-known botanist, is from. It is not true oregano in the family, Origanum, but has a scent characteristic of the true oreganos.

Indian Borage is a sprawling and somewhat succulent attractive, aromatic evergreen perennial herb that grows about 1 m (3.3 ft.) tall and even more in width in the wild. The plant is found growing in woodland or coastal bush, on rocky slopes, loamy or sandy flats, roadsides, waste places and river banks. It is known to grow in rocky, loamy or sandy soil. The species is tolerant of some shade, preferring fertile, well-drained soils in partially shaded areas. The plant has fibrous root. Stem is fleshy, about 30–90 cm (12–35 in), either with long rigid hairs (hispidly villous) or densely covered with soft, short and erect hairs. Old stems are usually smooth. This sprawling large succulent herb is fleshy and highly aromatic.

Leaves are undivided (simple), broadly ovate to sub orbicular with a tapering tip (ovate) and very thick. They are 5–7 cm (2.0–2.8 in) long and 4–6 cm (1.6–2.4 in) wide. The margins are coarsely crenate to dentate-crenate except in the base. They are pubescent (thickly studded with hairs), with the lower surface possessing the most numerous glandular hairs, giving a frosted appearance. The petiole is 2–4.5 cm (0.79–1.77 in) long. The taste of this leaf is pleasantly aromatic with an agreeable and refreshing odor.

Flowers are on a short stem (shortly pedicelled), pale purplish in dense whorls at distant intervals in a long slender raceme. Flowers have a bell shaped calyx and the throat is smooth inside with two lips, the upper lip being ovate and thin, the lower lip having four narrow teeth. The corolla is pale purplish and five times longer than the calyx, with a short tube, inflated throat and short lips.

Fertile flowers are followed by smooth nut lets that are 0.7 mm long and 0.5 mm wide. Nutlets are initially green turning to pale brown as they mature. Seeds are smooth, pale-brown, roundish flattened, 0.7 mm (0.028 in) long and 0.5 mm (0.020 in) wide. P. amboinicus rarely flowers and seeds are difficult to collect.

Indian Borage plant is native to Southern and Eastern Africa, from South Africa (KwaZulu-Natal) and Swaziland to Angola and Mozambique and north to Kenya and Tanzania, where it grows in woodland or coastal bush, on rocky slopes and loamy or sandy flats at low elevations. From Southern Africa it would have been carried by Arabs and other traders to Arabia, India and Southeast Asia along the Indian Ocean maritime trade routes. The plant was later brought to Europe, and then from Spain to the Americas, hence the name Spanish thyme. Nowadays it is grown in several parts of the world due to its amazing look and health promoting benefits. 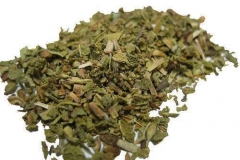 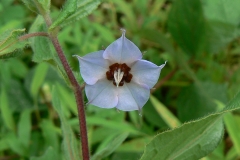 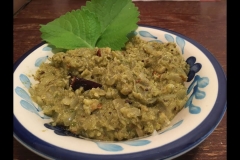 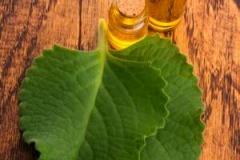 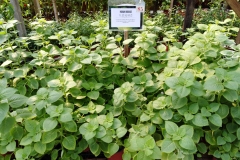 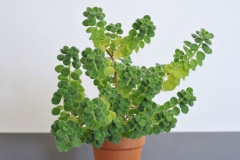 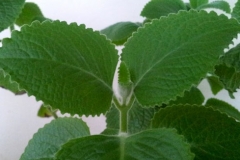 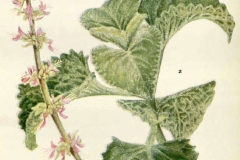 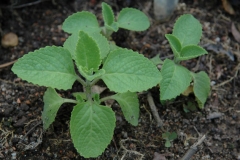 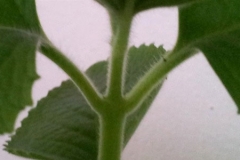 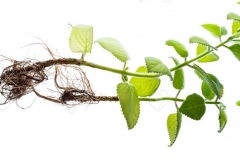 Listed below are some of the well-known health benefits of consuming Indian borage:

If you are suffering from a cold, a sore throat, congestion, a stuffy nose, or painful sinuses, you can chew on the leaves of Indian borage or brew a tea from the leaves. The compounds contained in the herb act as a powerful expectorant to remove mucus and phlegm from your respiratory tracts and clear out your sinuses. This can also help to boost your immune system by avoiding bacteria or other pathogens from lodging and developing in your tracts. (1)

If you are suffering from a cold or flu, one of the common symptoms is a fever. Typically, you don’t start getting better until your fever “breaks”, as a sign that your immune system is making some headway. Indian borage is a sudorific, meaning that it motivates sweating, which also helps to clear out toxins through the skin and speed the recovery process. (2)

Although it is the lesser-known benefits of Indian borage, some of the organic compounds and minerals found in this herb have been revealed to be mildly sedative in nature, so this herbal remedy, mostly in tea form, is often offered to people with high anxiety or chronic stress to encourage relaxation, peace of mind, and healthy, restful sleep. (3)

One of the most popular uses of Indian borage is an effective skin treatment. From bug bites and stings to eczema and psoriasis, Indian borage possesses the anti-inflammatory compounds that can rapidly reduce redness and swelling, while also eliminating itchiness and irritation. (4)

Research has discovered that the stem of the Indian borage plant was rich in antioxidants and has the capability to scavenge free radicals. The extract of this plant helped inhibit proliferation of cancer cells and also, has displayed the potential for antiplatelet accumulation ability. (5)

Indian borage acts as a quite effective diuretic, which means that it can clean the body of toxins by stimulating urination. This also reduces the amount of excess salt, fat, and water in the body, keeping the kidneys and lymphatic system functioning smoothly. (6)

Since ancient time Indian borage was used traditionally to settle upset stomachs and relieve irritable bowel syndrome by regulating digestion and soothing stomach inflammation. Brewing tea from the leaves of Indian borage is the most effective way to take advantage of this health benefit.(7)

Women will be glad to read that Indian borage reduces menstrual pains, delivery pains, and headaches. In India and some parts of Indonesia, the herb is given to lactating mothers to increase the milk flow.

Content of omega-6 fatty acids present in the leaf of Indian borage is supposed to reduce arthritis. Additionally, athletes are also recommended to consume this leaf to prevent osteoporosis

Indian borage is also used to improve one’s sight. The plant consists of vitamin A that can reduce oxidative stress in the eyes and prevent macular degeneration.

The perfect dose is one tablespoonful of the fresh juice every hour, for adult. For children, one teaspoonful every two hours, four times a day. As an infusion, 50 to 60 grams to a pint of boiling water, and drink the tea, 4 to 5 glasses a day. For Children, ½ cup 4 times a day. This treatment should be continued until the ailments are gone.

For deafness or pain and noises in the ear, just pour in the fresh, pure juice, and let it stop there for 10 minutes. For carbuncles, felons, boils, sprains, painful swellings, and in nervous cases, just make a poultice of the leaves and apply over the affected part. Change it 4 times a day. 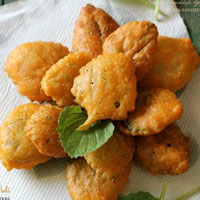 (Notes: The addition of baking soda is optional but helps the fritters to puff up and the covering doesn’t stick to the leaf but forms a cavity). 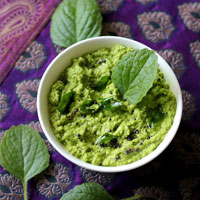