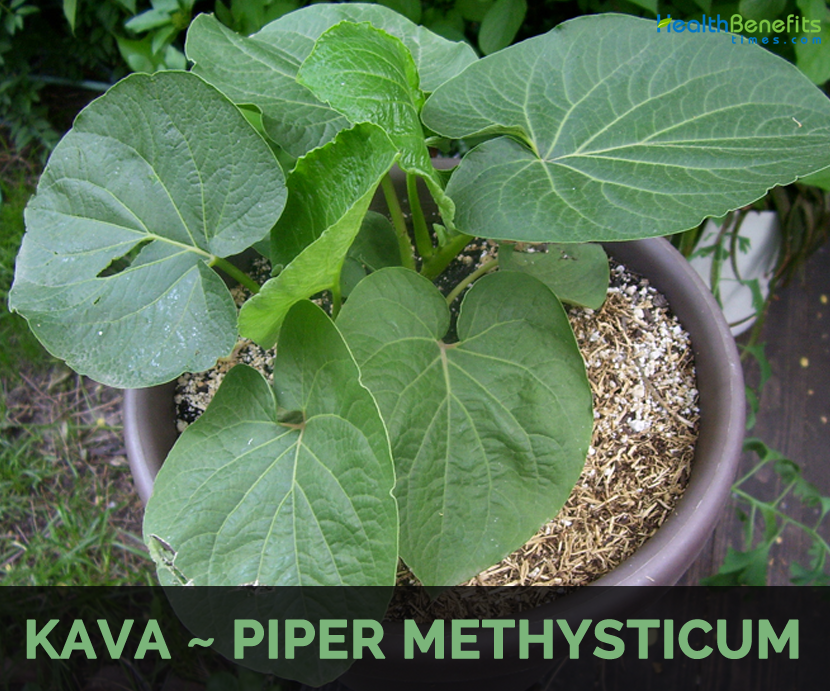 Kava, scientifically known as piper methysticum, is a small shrub native to the islands in the South Pacific, where it has been used for thousands of years as the source of a narcotic sedative drink derived from its roots and used during celebrations and other events (traditional preparation involved chewing or pounding the roots to a pulp and mixing it with cold water). The root and stems are made into a non-alcoholic, psychoactive beverage that has been used socially and ceremonially for hundreds of years in Hawaii, Fiji, and Tonga. Kava belongs to the pepper family (Piperaceae) and is also known as kava, asava pepper, intoxicating pepper, awa, Kava-Kava, Kava Pepper, Kava Shrub, Kawa and Yangona Pepper. Genus name comes from the Latin name from the Greek word peperi, itself derived from an Indian name. Specific epithet means intoxicating.

The roots of the plant are used to produce a drink with sedative, anesthetic, euphoriant, and entheogenic properties. Kava is consumed throughout the Pacific Ocean cultures of Polynesia, including Hawaii, Vanuatu, Melanesia and some parts of Micronesia for its sedating effects. Kava is a cash crop in Vanuatu and Fiji. The beverage is consumed to promote relaxation and ease stress without interfering with alert mental functioning. It is also taken as a sacrament prior to ceremonies or in the spirit of friendship at social get-togethers. Active ingredients in the roots are kavalactones which have sedative and anesthetic properties. Preparation involves grinding or pounding the root into a powder and adding the powder to water. Piper nigrum is the source of black and white pepper used throughout the world.

Kava is an evergreen, robust, dioecious, vine-like perennial shrub that grows about 1–4 m high in partial sun, shaded from the canopy of the tropical forests, and grows best in areas between 500 and 1000 feet above sea level. It is grown in loose, deep, organically rich, well-drained soils in moist, humid, tropical conditions with frequent rainfall. The plant has lateral roots about 2 m long and 8 cm diameter with glabrous, woody, branching stems. Leaves are green, alternate, glabrous, cordate, 10–30 cm by 9–24 cm, entire, apex acute, palmately veined and borne on 2–7 cm long petioles.

Flowers are small, unisexual, whitish, occurring in short, irregular, axillary spikes or opposite leaves. The floral bracts are rounded and peltate on pubescent pedicels. The male spikes with flowers bearing two short stamens, female spikes (rare) female flower with a unilocular ovary and stigma. The fruit, a berry is seldom produced and the plant must be propagated by dividing the roots or through stem cuttings.

The species is indigenous to and cultivated in the islands of south Pacific, from Hawaii to Papua New Guinea, with the notable exception of New Caledonia, New Zealand and most of the Solomon Islands.

Kava root is also used to treat pain and swelling of uterus, menstrual discomfort, urinary tract infections, sexual arousal and skin diseases such as speeds up healing process, leprosy, eye health issues and painkiller. Listed below are few of the health Benefits of Kava root:

Kava root has anti-inflammatory and analgesic qualities. While these are mild in comparison to other effects, these might be the most widely needed by the general population. If you suffer from arthritis, or have recently had surgery or an injury, then having a quick kava root decoction could be just what the doctor ordered to relieve inflammation and pain. (1)

Though closely related to the other pain relief and inflammation benefit, kava root has also shown its efficacy against headaches and migraines, offering fast relief from those suffering from the conditions in laboratory tests. (2)

Anxiolytic effects of kava root are most well-known and desired by users herbal practitioners. By managing the hormonal balance in the body and easing the release of stress hormones into the bloodstream, kava root extracts and decoctions can keep your body and mind feeling calm and gratified, not to mention removing the potential dangers of having too many stress hormones in your system! (3)

Antioxidants are powerful organic compounds that can help our bodies stay safe by eliminating or neutralizing free radicals around our systems. Free radicals are the dangerous byproducts of cellular respiration, and can cause the mutation or apoptosis of healthy cells. This can lead to premature aging, chronic disease, and even cancer. In terms of kava root, it has often been praised for its life-giving qualities, and studies have shown that free radical activity is reduced with kava root application, as the concentration of antioxidants is so high. (4)

As women age, they enter a period of life called menopause, when they stop menstruating. However, this changeover can be long and uncomfortable, including hot flashes, cramping, hormonal swings, and anxiety. Kava root has been tested positively in individuals going through menopause and has shown itself to be superior to placebo and over-the-counter menopause treatments.(5)

Kava root is a popular tool to help people quit anything (alcohol, cigarettes, drugs, etc.), as it can help curb cravings and eliminate the anxiety so often caused when all you want in the world is a cigarette. Kava root decoction can calm the nerves when you are particularly anxious to break the promise to yourself. In other words, kava root represents a major challenge to two globally dominant industries – cigarettes and anti-depressants.(7)

To Know More about Kava Root and its benefits Click Here

Traditional Uses and benefits of Kava

How to Consume Kava

Kava is primarily a medicinal herb, not a culinary ingredient. Typically, medicinal preparations of kava are made using the root, which is the part of the plant with the strongest health benefits.