Trending
You are at:Home»Vegetables»Know about Hairy Cucumber 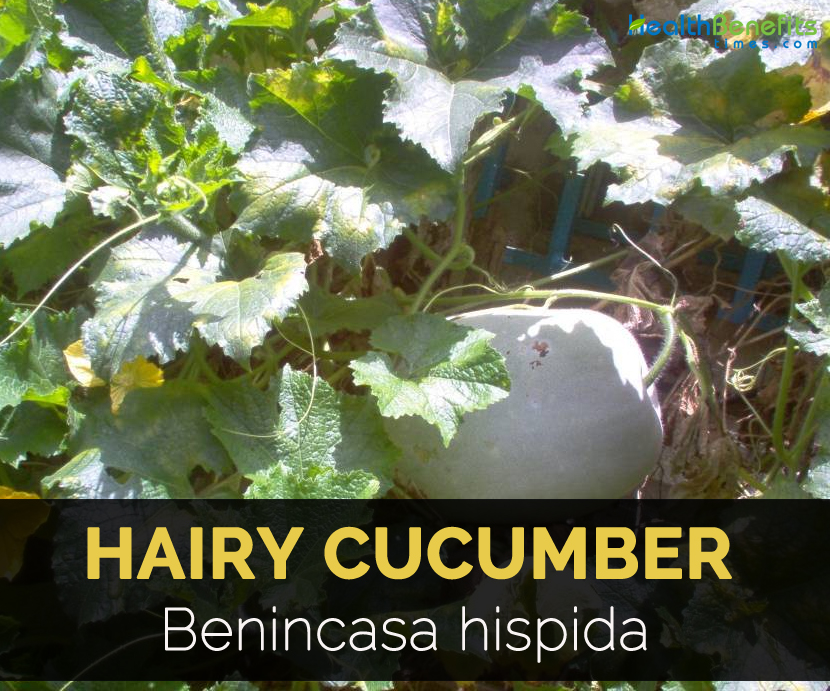 Benincasa hispida, which is commonly called ash gourd, winter melon, winter gourd, wax gourd etc. belongs to the family Cucurbitaceae. Native to Southeast Asia, it is an annual creeping vine with branched tendrils which climb structures, cover fences or sprawl along the ground. Stems are coarse, thick, hairy. Leaves are large, roughly textured and 5-lobed about 4-10 inches long. Flowers are golden yellow, 3 ½ inches wide in leaf axils in early summer. Flowers are followed by oblong to nearly spherical melon like fruits. Young fruits are covered with soft down that disappears as the fruits mature. Flesh is white, crisp and juicy. Young fruits are perishable and used the same way as summer squash. It may be peeled, shredded or cut into chunks for baking, sautéing and adding it to soups. Typically hairy cucumber ranges from 5-20 pounds and it has rounded to cylindrical shapes and in ideal conditions it could grow larger to 25-50 pounds and 4-6 feet long.

The origin of this variety is uncertain but Indo China and China are deemed to be the center of greatest diversity. Since 500 AD, it is cultivated widely in Southeast Asia. Probably, it is endemic to Japan and Java and cultivated more/less throughout warm countries. This popular crop was widely used for nutritional as well as medicinal purposes. It is an important sub-tropical and tropical cucurbitaceous vegetable grown in India, China, Philippines and some parts of Asia.

It prefers rich and well-drained soil with ample moisture in the growing season. It grows well in warm and sunny position and it also tolerates drought. It requires pH in the range 5.8 to 6.8 and also grown best in greenhouse.  The plants perform well when they get stable temperature in excess of 25 degree Celsius. The female flower develops with short day length and low temperature and on the other hand, it requires higher temperatures to stimulate male flower production. Seeds become mature in the duration of 5 months to produce a mature crop.

Fuzzy gourd is an annual climber with trifid tendrils. Leaf lamina is deeply lobed, dentate and softly hispid on 15-20 cm long. Flowers are bright yellow and 6-12 cm across. Fruit is green to dark green, oblong cylindrical, clavate or dumb bell shaped about 15–23 cm long by 5–10 cm across. Flesh is white. The plant is monocious vine type which bears large green fruits. Fruits have white or yellowish white seeds. The color of the seed changes from white to yellowish brown.

Stem is much branched, thick, 5-sided, furrowed and covered with sharp bristles. Tendrils (split at 3 cm into 2 to 3) each 15 cm, slender and rarely simple. It sprawl over ground or climb like pumpkin.

Leaves are large, roundish, kidney shaped and base is deeply heart shaped. Upper surface is rough and lower surface is shortly bristly with blade 10-25 cm long and as much broad.

Flowers are solitary, yellow, flat faced and sexes are separate. Male flowers are 5-15 m long with 3 stamens of 1 cm length. Female flowers are 2-4 cm long and style dividing into three. Petals are spreading, blunt and ending in short point.

Fruits are spherical, hairy and fuzzy and ripen dark green with white wax and outer layer is hard. The skin color of immature fruits is light or dark green to purple blue. Flesh is white and fruit is covered with downy hairs. 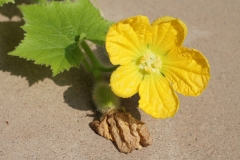 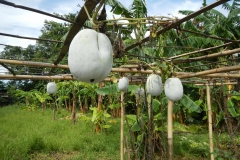 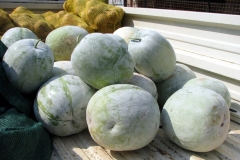 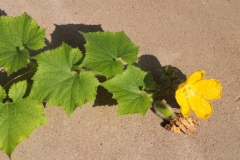 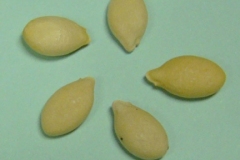 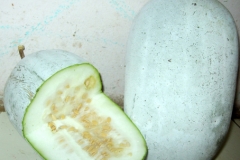 Study was conducted to determine healing of ulcers induced by indomethacin due to antioxidant activity of fruit extract of Hairy Cucumber on ulcers in rats. There was increase in SOD in RBC and homogenate levels and Vitamin C in plasma. In animals, there was apparent decrease in ulcer index treated with fruit extract. It contains certain active principles such as flavonoid C- glycosides and sterols, terpenes. It inhibits gastric mucosal injury by scavenging free radicals and repress production of SOD and Vitamin C.

Studies suggest that Benincasa hispida fruit extract in graded doses lowered diarrhea by inhibiting intestinal peristalsis, PGE2-induced enteropooling and gastrointestinal motility. BHFE, on preliminary studies claimed it as potential antidiarrheal agent, an underlying mechanism appears to be spasmolytic and anti-enteropooling property by which fruit and its extract provide relief from diarrhea.

Methanolic extract of Hairy Cucumber fruit exhibited anti-compulsive effect in mice by inhibiting marble-burying behavior and it was comparable to that of fluoxetine. Its anti-compulsive effect was observed that sub effective dose of MEBH potentiated the effect of sub-effective dose of fluoxetine and exhibited the significant inhibition of marble burying behavior. Phytochemical studies revealed that the presence of tryptophan in extract is an important precursor of serotonin in serotonergic neurons and enhances the biosynthesis of serotonin to facilitate the anticompulsive effect of MEBH.

Study was carried out to investigate cognitive function by enhancing effect of methanol extract of Hairy Cucumber fruit. MEBH produced significant reduction in number of entries and increase in percentage of alteration. It can be concluded that MEBH exhibits prominent nootropic effect and antiamnesic effect in both models of memory.

Hypochlorhydria is a risk factor of gastric carcinoma, anemia and Helicobacter pylori infection. In the study, hypochorhydria was induced by rantidine, a histamine receptor antagonist. The study evaluated the protective effect of pre-administration. The herbal extracts recovered the gastric secretion and provide satisfactory results in Vitamin C concentration in gastric juice.