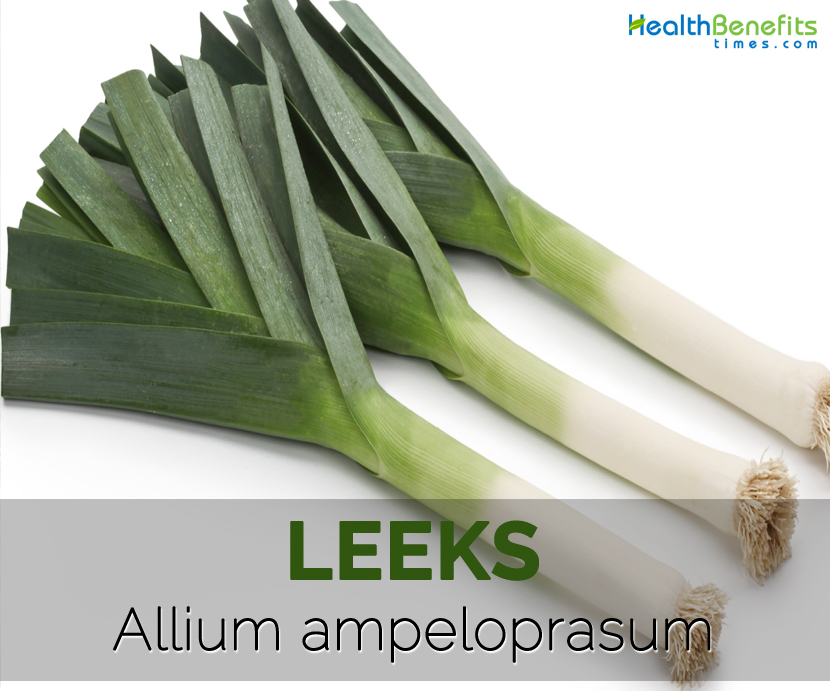 Leek belongs to the family Liliaceae and genus Allium which is composed of approximately 600 known species that have been distributed all over the Northern hemisphere. Leeks are perennial, herbaceous and bulbous herbs with intense aroma. Though it is a biennial plant, it is cultivated as an annual. The Allium ampeloprasum does not form hard bulbs like garlics and onions. The plant only possesses a solitary, cylindrical ovoid- subglobose bulb. The swollen stem is enclosed with 6 to 9, flat and cylindrical blue green leaves which are about 3 ft. long.

Leeks are also commonly referred to as English Leek, European Leek, Kurrat Leek, and Wild Leek. It has a long tradition as a food and medicinal plant. Today, Leek is cultivated in the regions with cool climates all over the world. It demonstrates laxative, diuretic, antiseptic, anthelmintic, antibacterial, vadodilator, diuretic and antispasmodic effects. American Flag, Giant Musselburg, King Richard, Otina and Pancho are the five varieties of Leeks.

Originated from Middle Asia, Leeks are cultivated in various parts of the world such as Western Asia and Mediterranean countries.

This vegetable has been cultivated since the time of Ancient Egyptians. The Egyptians and Romans use it in their cuisine during great feast. It was grown for more than 3,000 years in Asia and Europe. Leeks were cultivated during the Middle Ages in the Europe. With the arrival of first settlers, the Leeks were cultivated in North America. Leeks have become popular in the United States recently. Today, Leek is grown widely on Northern Europe and Asia, from Ireland to Northern China.

It is a robust, odorous and erect herb which grows to a height of 60-100 cm (2-3 feet). The flat leaves emerge from a cylindrical ovoid- subglobose bulb which bears fibrous and shallow roots. The bulb is 8-10 cm (3-4 inches) long and 2-3 mm in diameter. The leaves are cylindrical, alternate, blue-green or yellow-green and 3 ft. (0.9 m) long.  The erect stem grows 0.5-0.75 m high with 2 inches as a diameter. An umbel like inflorescence composed of white, pink or purple flowers grows at a tip of stem. The flowers are ovate-oblong and 4–6 mm long. The fruit contains six small and black seeds of 2–3 mm × 2 mm. The plant grows best in fertile and well drained soils.

One cup of leeks (raw) about 89 grams contains 54 calories. In a serving, Leeks contains 41.8 µg of Vitamin K, 1.87 mg of iron, 0.428 mg manganese, 0.207 mg Vitamin B6, 57 µg folate, 0.27 gram fat and 1.6 gram of dietary fiber. Dietary fiber helps to reduce the level of cholesterol levels by eliminating the cholesterol absorption from the food. Leeks assist to control weight as it is low in calories.

Leek is loaded with high amount of phytonutrients, nutrients and low amount of calories. Due to the laxative, antiseptic, antibacterial, diuretic and antispasmodic properties, Leeks helps to prevent and treat various health problems. It could be consumed by adding to the soups, salads or casseroles. It prevents inflammation and cancer. Leeks provide an ample amount of nutrients and minerals in a favorable cost.

A leek has the ability to prevent and treat cancer. Insulin which is found in Leeks acts as a cancer protective component. The study shows that it also prevents the DNA mutation which is the cause of forming cancer. The daily intake of Leek helps to reduce the risk of prostate cancer.

A bioactive compound named diallyl trisulfide eradicates the growth of tumor cells and forbid the blood vessels to form within the existing tumors. Leeks have allicin neutralize the development of free radicals in the body. The low presence of free radicals in the body is related to low risk of cancer. Kaempferl is an antioxidant that provides antimicrobial, anti-inflammatory, antioxidant, anti-osteoporotic, antidiabetic, cardioprotective, estrogenic/antiestrogenic, antiallergic, anxiolytic, neuroprotective, anticancer and analgesic activities which helps to relieve oxidative stress in the blood.

The consumption of Kaempferl reduces the chances of colorectal cancer and gastric cancer. It prevents the damage of blood vessel linings by lowering stiffness, relaxing the blood vessels and dilates with the release of nitric oxide.

Flavonoids found in Leeks helps to lower the risk of cardiovascular disease. Flavonoids have a positive impact on vascular function, blood pressure and serum lipid levels. It is due to the kaempferol found in leeks.

Vitamin B (folate) is found in high amount which is crucial for maintaining heart health. It lowers the homocysteine levels in blood which is associated to chances of stroke and heart attack. This is why deficiency in folate is harmful to the heart.

The polyphenols protects the cells and blood vessels from oxidative damage thus preventing the cardiovascular conditions. All these facts and studies show that Leeks should be added to the diet in order to prevent peripheral vascular disease, stroke and heart disease.

Leek possess adequate amount of folate which is essential to have a healthy pregnancy. The high amount of folate helps in cell division and DNA absorption. It also prevents neural tube defects and miscarriage.

It is also essential during the 28–31 week gestational period as the baby requires enough time to develop in womb to have a healthy and safe delivery. Leeks assist in the regular bowel movements of the baby as well. The addition of leek to the diet of breastfeeding mother prevents the constipation in newborns.

Leeks contain low amount of calories which makes full without feeling heavy in the stomach. As it is rich in fiber, it makes us full for a long period of time which helps to prevent short meals. The fiber boost metabolism which allows burning more calories and maintaining the level of energy.

Inulin is a prebiotic which reduces the risk of weight gain and obesity by maintaining the diversity and balance of intestinal bacteria.

Leeks contains prebiotics not only lowers the chances of obesity but manages the bacteria which allows the absorption of nutrients from the food that we eat. It eradicates the waste from the body, vitalizes intestinal peristalsis and secretes digestive fluids. The leaky gut results the inflammation so the foods which are rich in fiber soothes the inflammation of cells.

Leeks cures as well as prevents the infections such as hay fever, cold, flu and urinary tract infections due to their antiseptic effect and soothing action. It possess meaningful amount of Vitamin A that assist in the development of red and white blood cells which transports oxygen to overall body and counteracts infection.

The low presence of hemoglobin and red blood cells are the cause of anemia because low amount of oxygen is reached to the body. It leads to low level of energy, low immunity and poor brain function. The WHO evaluated that half cases of anemia in 1.62 billion is caused due to the deficiency of iron and other is caused due to the genetic factors.

The study shows that the people who intake high amount of Vitamin C, their risk of stroke was reduced by 42% in comparison to those with low intake. The addition of veggies and fruits to the diet increase the Vitamin C in the blood.

Vitamin C is an antioxidant which prevents from the damage of free radicals, pollutants such as smoke, cigarette and toxic chemicals. The buildup of free radicals in the body contributes to the health problems such as arthritis, heart disease and cancer. During the process of breaking down of food in a body and when exposed to tobacco, smoke or radiation the free radicals are developed in the body.