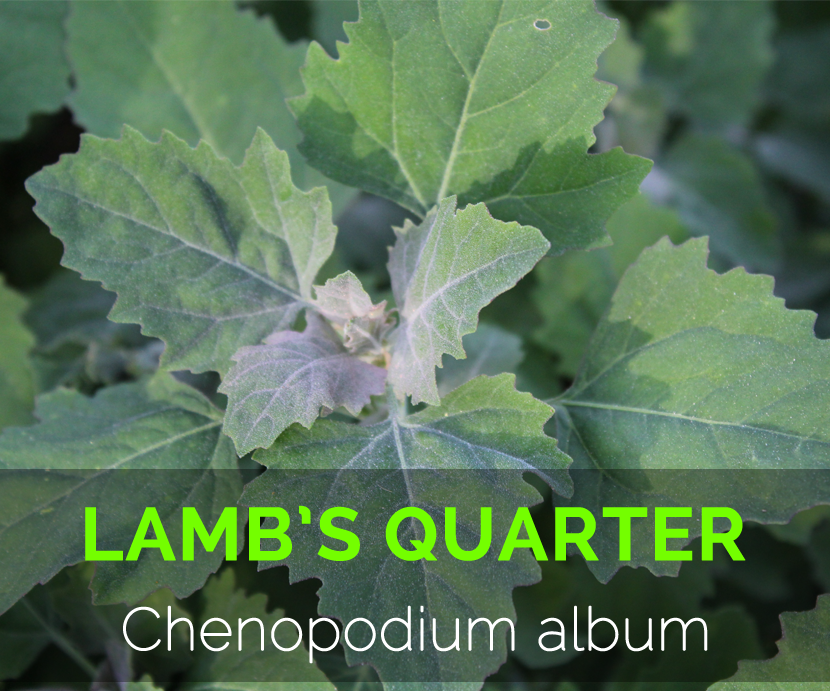 Lamb’s quarters (Chenopodium album) native to Europe and Asia is a relative of spinach and is found in many gardens growing as a weed. It is a member of the Chenopodiaceae family of vegetables and is a traditional food all around the world, and is grown as a crop food in parts of India. It is also a close relative of the Quinoa, the plant that is grown for the Quinoa grain found in health food and now grocery stores. Make use of the leaves just like you would use spinach leaves. It is widely known to be edible but few people take advantage of it. Some popular varieties of Chenopodium album are common lambs quarters, lambs quarters goosefoot, pigweed, white goosefoot, melde, fat-hen which are found used throughout the world.

Leaves are usually alternate, simple, green above, and mealy-white below. They can be triangular, diamond-shaped, or lanceolate. Lower leaves are borne on stalks, have coarsely toothed margins or shallow lobes, and often resemble a goose’s foot. Upper leaves do not have stalks and are narrow and linear. Leaves are 1/2 – 3 inches long and up to 1 1/4 inches wide. Plants often have a frosty white coloration due to a mealy pubescence, particularly on the underside of leaves, on young leaves, the base of mature leaves and on the leaf stalk.

Flowers are tiny, petal-less, gray-green flowers occur in tightly clustered spikes at the ends of branches.Flowers are globular and are enveloped almost entirely by a cup of five green sepals 10–40 cm long and is found blooming from June to September. Flower later produces round to oval, somewhat flattened, black to brown, shiny seeds which are enclosed by a star-shaped, papery covering.

Lamb’s quarter is very high in important Vitamins, Calcium and phosphorus and is also good source of protein, trace minerals, B Vitamins, iron, and potassium. Young plant is gathered whole when stems become tough just collect leaves and tender tips. Use the shoots, leaves and tips in any way that you might use spinach. It tastes a lot like spinach, only milder, with sort of a hint of peapods.

Common lamb quarters were once supposed to be a native of Europe and Asia. However, new archaeological research show that the seeds were stored and used by the American Blackfoot Indians during the sixteenth century, before European trade had come to the New World. It is widely introduced elsewhere, like Africa, Australasia, North America, and Oceania, and now occurs almost everywhere in soils rich in nitrogen, especially on wasteland.

Lamb’s quarter is a nutrients dense vegetable which can be consumed whole when the plant is harvested young. It is high in vitamin A, calcium, and phosphorus and is also a good source of protein, trace minerals, B-complex vitamins, vitamin C, potassium, iron, and fiber which are extremely essential for normal functioning of the body organs as well as heals long term illness.

Reduction of bone density is one of the main symptoms of osteoporosis. It normally occurs after the age of fifty and is found in many post-menopausal women. It may cause several difficulties and growths silently when kept untreated for a number of years. After years of this gradual bone loss, the symptoms and signs of osteoporosis appear, such as spinal deformity, fractures and pain. Individual’s bone mass decrease starts occurring around the age of 20-30. After this peak time, bone building starts to diminish. For females, maximum bone loss starts occurring after menopause, when the estrogen levels decline. The intake of leafy vegetables, lamb’s quarter, collard greens, broccoli, spinach, Brussels sprouts and lettuce, all of which are rich in Vitamin K, is essential for the body. Even cow milk is good and rich in Vitamin K. So frequent consumption of lamb’s quarter is recommended to get relief from osteoporosis as lamb’s quarter consists of about 889.6 µg of vitamin k which is 741.33% of the daily recommended value.

Vitamin A present in lamb’s quarter is necessary for wound healing and skin re-growth. It is necessary to support all of the epithelial (skin) cells both externally and internally and is a powerful aid in fighting skin cancer. Vitamin is required to form glycoproteins, a combination of sugar and protein, which help the cells bind together forming soft tissues.

A deficiency of vitamin A can result in a poor complexion, as showed by studies that prove that vitamin A can fight acne and develop overall skin health. Vitamin A helps to keeps the lines and wrinkles in your skin away by producing more collagen, which is responsible for keeping the skin looking young. Vitamin A can also contribute to healthy hair.

Scientific research has found that a high consumption of fresh vegetables and fruits is related to a reduced threat for various types of cancer. Studies have also shown that increased consumption of vitamin C rich vegetable like lamb’s quarter is connected with a reduced possibility of cancers of the lungs, mouth, vocal chords, throat, colon, rectum, stomach, and esophagus.

Sufficient amounts of calcium present in lamb’s quarter helps to lessen the symptoms of premenstrual syndrome like mood swings, dizziness, and hypertension many others. Low levels of calcium might trigger the release of the hormones that are responsible for premenstrual mood swings including irritability and depression. Lamb’s quarter consists of 464 mg of calcium which is 46.40% of the daily recommended value.

Manganese has also showed efficiency in controlling the level of sugar in human blood. This may further prevent the occurrence of certain diseases like diabetes. To control the level of sugar in the blood, manganese present in lamb’s quarters normalizes insulin synthesis and secretion, and the unpredictable drops in blood sugar can be better regulated, providing a more normal and functional life for diabetics.

Lamb’s quarter consists of considerable amount of copper. Research studies have revealed that copper help to reduce the levels of “bad” cholesterol (LDL cholesterol) and help to increase beneficial cholesterol (HDL cholesterol). This will help to lower the likelihoods of cardiovascular diseases like heart attacks, atherosclerosis, and strokes.

To deal with eye disorders, riboflavin drops are applied to patient’s corneal surface who suffers from glaucoma, allowing the vitamin to penetrate through the cornea and to increase the strength of the cornea when used with light therapy.

Other Traditional uses and benefits of lamb’s quarter