Trending
You are at:Home»Dairy»Health benefits of Cow’s milk 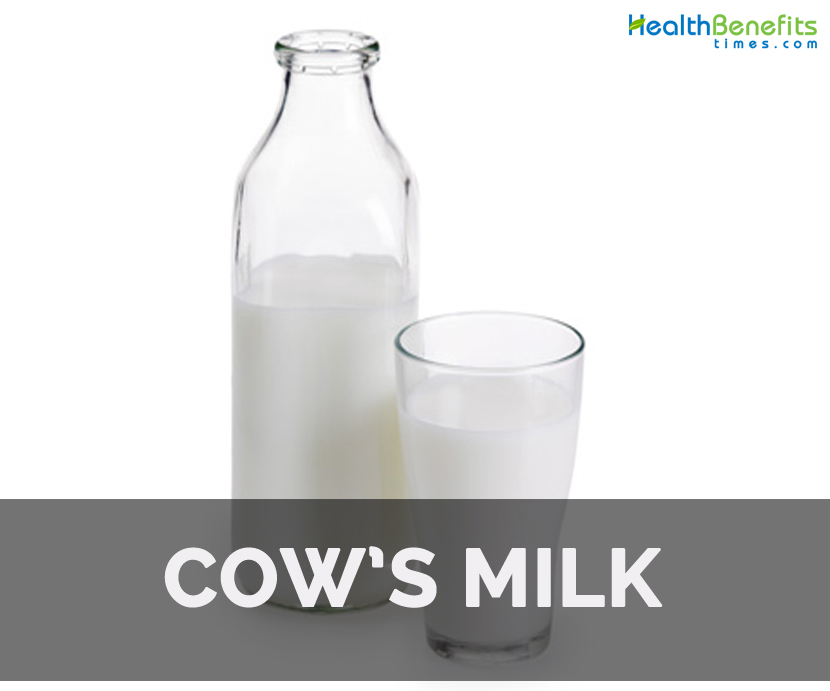 The pale liquid which is produced by the mammary glands of cow is called cow’s milk. It is well known to the world. Cow produces milk when she delivers a calf. The pregnancy lasts for about nine months. Milk is considered as a complete food which is loaded with necessary nutrients, calcium that supports of maintenance and development of human body. It has glossy, creamy and thick texture. No preservative or artificial coloring is added to cow’s milk. Unlike buffalo’s milk, it is pale creamish with yellow tinge. Cow’s milk is a great source, calcium, potassium, Vitamin D and proteins. It is vital for healthy teeth as well as bones. Due to the low presence of fat, it could be preserved for lower time periods.

In 10000 BC along with agricultural revolution, the domestication of animals also started for milk. The dairy products and milk was restrained for wealthy, priests and royalty. In Europe, the sheep and cows were value highly for milk in 5th century. The milk of cow was well known in comparison to the sheep’s milk in 14th century. In early 1600s, European dairy cows accompanied to North America. The pasteurization test was made by a French microbiologist named Louis Pasteur in 1862. In 1895, the machines for commercial pasteurization were introduced. The first milk bottle was introduced in 1884 in New York. Milk cans was replaced by tanks in 1930s. The invention of plastic coated paper milk cartons assist in the wider distribution of milk.

Cow’s milk is a great source of calcium, potassium and Vitamin D. It is used to make other forms of dairy such as yogurt, cheese and others. Cow’s milk is able to lower fat, enhance immunity, prevent diabetes, protect heart health, strong teeth and bones, lower inflammation, stimulates growth and assist weight loss.

Milk is essential for the maintenance of strong bones. It is rich in calcium as well as other minerals for the density of bones. Moreover, it has adequate amount of proteins which is helpful for the teeth along with bones. Milk is effective for strengthening the mineral density of bones. (1)

Cow’s milk has high concentration of Omega-3 fats which are healthy forms of cholesterol level in the body. It also promotes heart health and prevents the chances of cardiovascular ailments such as strokes and heart attacks. (2)

Milk has high content of protein and calcium. It also contains antioxidant compounds such as selenium, Vitamin E and zinc that could eliminate harmful free radicals that could cause chronic illness and mutations. The research also shows that it could lower the chances of heart disease and cancer. It promotes the skin’s appearance and its youthfulness. (7)

The nutritious fluid which is made in dairy cows udders to preserve the newborn calf all along the first months of life. Cow’s milk is used to make the food products such as cream, cheese, yogurt and butter. It has become the primary part of modern diet. Milk has complex nutritional composition and is comprised of each nutrient necessary of human body. Milk has proteins that could be divided into two groups on the basis of water solubility. Casein has insoluble milk proteins and whey proteins are soluble proteins.