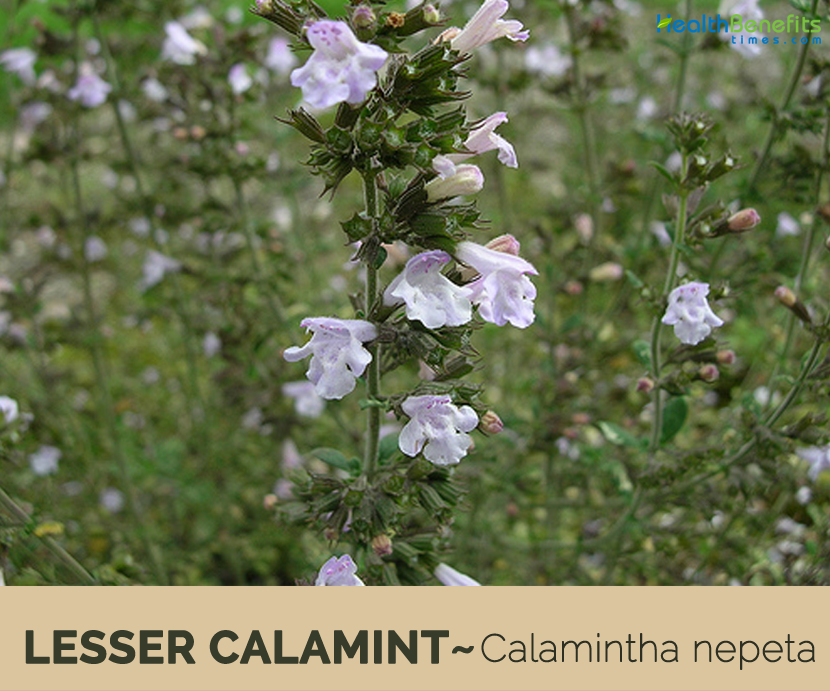 Lesser calamint scientifically known as Calamintha nepeta is a plant originally native to Italy but is also found throughout the Mediterranean, Eastern Europe, and some parts of the Americas, where it flourishes in arid landscapes and in waste areas, often being confused for no more than a weed. Other common names of the herb include calamint, calament, mill mountain, basil thym, mountain balm mountain mint, mill mint, emperor’s mint and catmint. It was once a popular culinary herb for the Early Roman societies. Belonging to the mint family, it is characterized by its somewhat faint flavor and for its slightly pungent aroma suggestive of a mix between oranges and peppermint, or more often, of peppermint and oregano. Genus name comes from Greek kalos meaning beautiful and mimthe meaning mint. Kalaminthe means savory. Specific epithet is in reference to the similarity of the plant to catnip. Lesser calamint is used in borders. It is also as a spice in the Italian cuisine where it is called mentuccia, nipitella or nepitella

Lesser Calamint is a compact, bushy, rhizomatous, perennial herb that grows around 2 feet (60cm) tall and a spread of 2 feet 6 inch (75cm) wide. The plant is found growing on the banks and in meadows, while its original habitats included crumpled slopes and lightly filled mountainous outcrops. The plant prefers slightly acidic to slightly alkaline, dry to medium moisture, well-drained soils. The plant has square stems and leaves are ovate, shallowly-toothed, dark green leaves that grow to around 2cm (¾in) long sit on very strong stems and are very fragrant, exuding an intense minty scent when crushed. The lesser calamint smells like a cross between mint and oregano. It attracts honeybees and butterflies.

The medium-sized to large flowers are 5 to 20 blossomed cymes. The pedicle is 0 to 22 mm long and the tubular calyx is 3 to 7 mm by 1 to 1.5 mm in size and slightly downy to very downy on the inside. The upper tips are 0.5 to 1.5 mm and the lower ones are 1 to 2 mm, downy. They occasionally have long, ciliate hairs. It is also highly visible for its somewhat leafy and slightly showy inflorescence, which boasts pale purple to lavender-hued flowers with slight deep-purple spots near an ivory-white or light-purple center. Flowering normally takes place from Jul to September and seeds start ripening from Sep to October. The average life expectancy of a Lesser Calamint plant is 3–4 years. It is susceptible to powdery mildew.

Due to its primary use as a medicinal herb, lesser calamint is fairly popular for the following uses and applications in treatment of ailments.

In addition to being a medicine for injuries, the herb may also be used to treat bronchial problems by using as a rub. People use it for respiratory illnesses as well. It is helpful in removing chest congestion and promotes sweating.

Leaves of calamint have a high content of menthol. This makes them a potential effective remedy for bruises and cuts.

3. Treatment of cold and fever

The herb is quite beneficial for dealing with cold and fevers. Use t carefully

This herb when used internally is quite beneficial for treating depression, insomnia and other nervous disorders.

5. Used as a flavoring additive

Traditionally, the herb has also been used to add flavors to meat to add a new taste to the food.

The appropriate dose of calamint depends on several factors such as the user’s age, health, and several other conditions. At this time there is not enough scientific information to determine an appropriate range of doses for calamint. Keep in mind that natural products are not always necessarily safe and dosages can be important. Be sure to follow relevant directions on product labels and consult your pharmacist or physician or other healthcare professional before using.