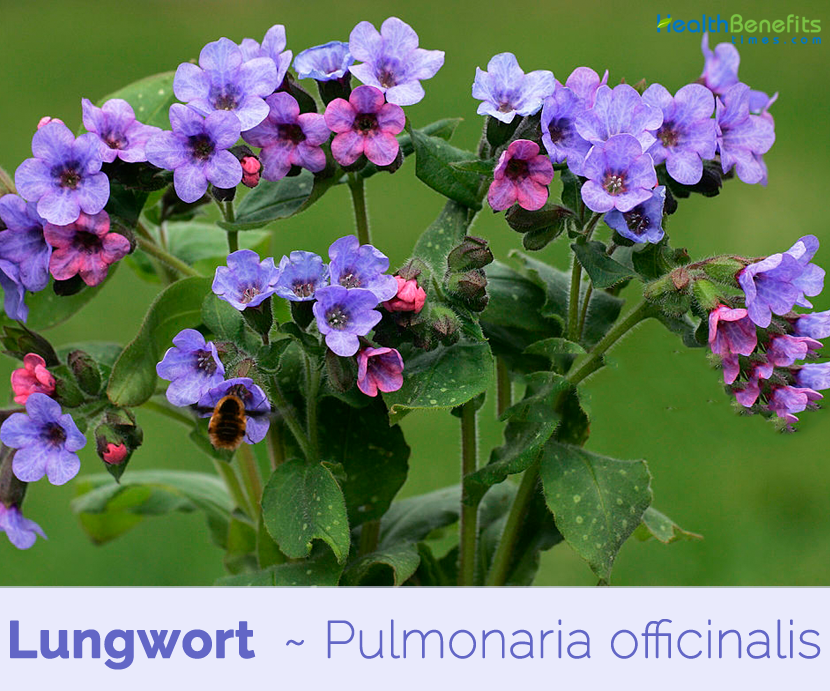 Pulmonaria officinalisis commonly known as Lungwort is an herbaceous evergreen plant of the genus Pulmonaria, belonging to the family Boraginaceae so is a relative of borage, comfrey, the alkanets, fragrant manjack and lasora as well as viper’s bugloss among many others. There is another plant called lungwort, (Lobaria pulmonaria) but that is a moss or lichen which is also called oak moss, because it grows on or under oak trees. The plant is native to damp habitats and coastal areas in Europe, Asia, North America, and Africa. Apart from Lungwort it is also known as Common lungwort, Jerusalem Sage, Jerusalem Cowslip, Sage of Jerusalem, Pulmonaire, Sauge de Bethlehem, Coucou Bleu Lungenkraut, Spotted Dog, Soldiers and Sailors, Joseph and Mary, Bethlehem Sage, Our Lady’s Milk Drops, Spotted Lungwort, Oak Lungs, Herbe aux Poumons, Pulmonariae Herba, lung moss, spotted comfrey, Adam and Eve, Bedlam cowslip, Beggar’s basket, Bugloss cowslip, Lady’s cowslip, Lady’s milk, Mary’s honeysuckle, Mary’s tears and Virgin Mary’s honeysuckle.

Lungwort is also known as “Soldiers and Sailors”, because it changes the color of the flowers from red to blue. Two-colored flowers can be seen at the same time, like the colors of the uniforms of British army (red) and navy (blue). The genus name of Lungwort was given by the German physician Leonhart Fuchs who is also considered the founding father of botany. Genus name comes from the Latin pulmo meaning lung. In accordance with the Doctrine of Signatures, genus plants were once believed by medieval herbalists to be an effective remedy for treating lung diseases because the spotted plant leaves supposedly resembled diseased lungs. It is, however, well established today that there is no valid basis for believing genus plants have any value as medicinal plants. Specific epithet means sold in shops.

It is a natural plant that has been used around the world for a variety of respiratory ailments, including coughs, colds, bronchial detoxification and catarrhal problems. Because it’s very sensitive to environmental toxins, the areas in which it is found are typically unpolluted old forests, and thus, the presence of lungwort is often a good indicator of an ecosystem’s health.

Lungwort is an herbaceous evergreen or semi-evergreen, perennial rhizomatous plant that grows about one feet or 30 cm tall and 30cm wide. The plant is found growing in damp open woodland, including oak, hornbeam, lime, sycamore and beech woods, and is also found scrub land. The plant prefers fresh and shady areas, nutrient-rich and mostly calcareous, stony or pure clay loam soils. The plant has upright, unbranched, hairy stem that can reach 12 inches in height. Stems are covered in downy hairs. Basal leaves are green, cordate, more or less elongated and pointed and always with rounded and often sharply defined white or pale green patches. Leaves are covered with whitish-grey spots in the most species of lungwort and are quite hairy. Plant produces small bunches of flowers. Funnel-shaped 5-petals flowers are ¾ inches long and are red or pink at first, later turn to blue-purple during the anthesis, by changing the pH value inside of the petals. As a matter of fact the flowers contain a dye that belongs to the anthocyanins and change the color from red to blue. The flower can be white, red, blue and purple. Different colored flowers may be seen on the plant at the same time. Flowering normally takes place from March through May.

Lungwort is a traditional herbal remedy with a wide range of possible health benefits. It is mostly used to treat respiratory disorders such as coughing, bronchitis, and asthma. While there is few scientific proof of its effectiveness, it has been used for several years and anecdotal evidence as well as analysis of its chemical constituents recommends it has a role to play. Listed below are few of the popular health benefits of using lungwort

The University of North Carolina classifies lungwort as a plant helpful for reducing irritation and providing soothing qualities. It is supposed that these beneficial properties, based mainly on irresistible anecdotal support, are thought as a respiratory aid.(1)

Lungwort’s high mucilage content is known to be useful in respiratory conditions, namely asthma and, in particular, chronic bronchitis. While there isn’t a ton of research currently available, it is widely accepted that lungwort can be used by people with these conditions–in conjunction with doctor recommendations–as a complementary approach.

In traditional medicine, Lungwort was used to treat lung diseases such as cough, grippe, catarrh, hoarseness, cold, asthma and even tuberculosis. It is said that the herb has anti-biotic effect against chest infections. Some also believe that Lungwort can be used internally for treating bleeding of the lungs. (2)

Digestive health is of supreme importance to your overall health and well-being. Many people suffer from digestive troubles such as bloating, constipation, stomach pain and dyspepsia but there are sufficiently of good, effective remedies to be found in nature.

Drinking a soothing cup of lungwort tea can also help relieve a number of digestive and gastrointestinal problems including indigestion and diarrhea. Lungwort has mild diuretic properties which may help relieve the discomfort of bloating from excess water build-up while its astringent properties may also be responsible for treating attacks of diarrhea.

As we all know that lungwort is a rich source of natural antioxidants, it can play a very important role in helping your skin remain stronger and younger but that is not all. Lungwort can also be applied topically to the skin to help treat minor wounds and cuts. It consists of a chemical compound called allantoin that is known for its ability to heal tissue damage and expedite wound healing.

Although we are lacking in any fixed scientific evidence, lungwort has been used traditionally to treat infections of the urinary tract like cystitis. Because of its natural diuretic ability, it has also been used to treat kidney complaints. Diuretics or water pills are often recommended for urinary tract conditions because they help promote the production of fluids in the body and increase the frequency of urination. This can help expel toxins and relieve infection but prescription diuretics also bring a risk of adverse side effects.

Traditional uses and benefits of Lungwort

Aerial parts of the lungwort plant are used to prepare oral and topical formulations. The preparations are available as infusions, dried leaves, and fluid extract.

The usual oral and topical doses are:

The topical formulations should be applied to affected area(s) only. 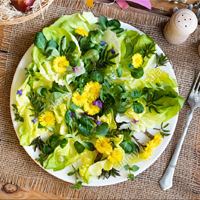