Trending
You are at:Home»Fruits»Mahua benefits and uses 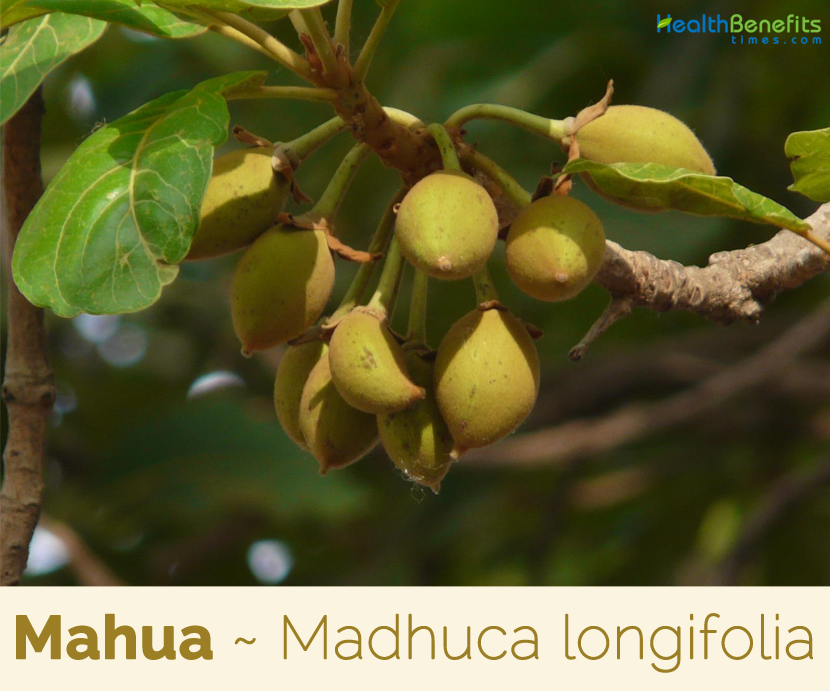 Madhuca longifolia commonly known as the Butter nut tree is a medium to large sized deciduous tree distributed in northern, central and southern part of peninsular India, Sri Lanka, Burma and Nepal. It is a multipurpose tropical tree mainly cultivated or harvested in the wild for its edible flowers and oil seeds. Few of the popular common names of the plant are Butter Tree, Bassia, Butter-nut tree, Illipe nut, Indian butter tree, Indian illipe butter, Illupai, Ippe, Mabua butter tree, Moatree, Moah tree, Moah wood, Mowra butter tree, Mahua and Moatree. It is a fast-growing tree that grows to approximately 20 meters in height, possesses evergreen or semi-evergreen foliage, and belongs to the family Sapotaceae. It is adjusted to arid environments, being a prominent tree in tropical mixed deciduous forests in India in the states of West Bengal, Chhattisgarh, Jharkhand, Uttar Pradesh, Bihar, Maharashtra, Madhya Pradesh, Kerala, Gujarat and Orissa.

Flowers, fruits and leaves are edible and are used as vegetables in India and other Southern Asian countries. Sweet, fleshy flowers are eaten fresh or dried, powdered and cooked with flour, used as a sweetener or fermented to make alcohol. The fleshy outer coat of the fruit is used as a vegetable. In India, during periods of scarcity, a combination of mahua flowers and sal seeds is boiled to prepare a substitute for grain staples. It is considered an important oil plant whose seeds yield between 35 and 47% oil.

Mahua is a medium sized to large deciduous shady tree that grows about 16-20 meters tall. The plant is found growing widely under dry tropical and sub-tropical climatic conditions. The plant thrives well on rocky, gravely, saline and sodic soils, even in pockets of soil between crevices of barren rock. The plant has deep, strong taproot. It has a short, stout trunk, 80 cm in diameter. The crown is rounded with multiple branches. The bark is yellowish grey to dark brown, vertically cracked and wrinkled; exfoliating in thin scales and has milky substance inside. Leaves are thick, leathery, 10-30 cm long, lanceolate, narrowed at both ends, glabrous distinctly nerved and clustered at the end of the branches. It excludes a milky sap when broken. Young leaves are pinkish and wooly underneath.

Flowers are small and fleshy, dull or pale white in color and in define fascicles near end of branches. Corolla is tubular, freshly, pale yellow aromatic and caduceus. Flowering normally occurs from March- April. Flowers are followed by fleshy berries that are 2-6 cm long, ovoid having 1-4 seeds that are brown to black colored. They are greenish when young turning to pinkish yellow when ripe.

Mahua seeds are of economic importance as they are good source of edible fats. Flowers have been traditionally used as cooling agent, tonic, aphrodisiac, and astringent, demulcent and for the treatment of helminthes, acute and chronic tonsillitis, pharyngitis as well as bronchitis. Leaves are expectorant and also used for chronic bronchitis and Cushing’s disease. The distilled juice of the flower is considered a tonic, both nutritional and cooling and also in treatment of helminthes, acute and chronic tonsillitis, as well as bronchitis.

Madhuca longifolia is distributed in northern, central and southern part of peninsular India, Sri Lanka and Burma. Of the two varieties, var. longifolia is distributed in Sri Lanka, Southern India extending northwards to Maharashtra and Gujarat; var. latifolia is found in some parts of central and north India and Burma. It is common in dry mixed deciduous forests, dry sal forest and dry teak forests. The tree grows on a wide variety of soils but thrives best on sandy soil. It also grows on shallow, boulder, clayey and calcareous soils. The species is drought-resistant, strong light demander and readily suppressed under shade. It is not frost-hardy.

Description of Some Species

It is a deciduous tree having 12-15 meter height. Bark is thick, dark colored, cracked, the inner bark red, milky, trunk short, branches numerous, spreading, forming a thick shady head. Leaves are clustered near the ends of the branches, coriaceous, hard and firm, elliptic or elliptic -oblong, shortly acuminate, pubescent or tomentose when young, at length glabrous, base rounded or acute. Petioles is long at first pubescent, ultimately glabrous or nearly so. Stipules are long, subulate, densely pubescent, vary caducous. Flowers in dense fascicles near the ends of the branches, below the terminal leaf-bud. Pedicels long, drooping, fulvous or rusty-pubescent or tomentose. Calyx is long, divided nearly to the base, segments ovate, sub-acute, rusty tomentose, usually 4 (rarely5), the two outer sub-valvate and enclosing the others. Corolla is cream colored, tube long fleshy, rugose, when dry, lobes 7-14 (usually7-9), ovate-lanceolate, acute, erect. Stamens 20-30 (usually 24-26), anthers in 3 series, acuminate, hairy at the back. Ovary is hirsute, style long and hairy at the base. Berry is long, fleshy, ovoid, greenish. It flowers in January-April under different climatic conditions.

It is a large tree commonly found in south India. It has numerous branches, bark thick, dark brown, scaly, the inner dark red, milky, young parts pinkish white silky pubescent. Leaves are thin, clustered near the ends of the branches, linear lanceolate, acute, glabrous when mature, much tapered towards the base, petioles long slender, stipules long, linear subulate, hairy and caducous. Flowers appearing with the young leaves, in dense clusters near the ends of the branches below the leaves, pedicels long, glabrous, erect at first, afterwards more or less drooping. Calyx long divided nearly to the base, densely rusty pubescent, segments usually 4, ovate oblong, acuminate. Corolla is long, tube fleshy, in flatted, glabrous, rugose when dried, lobes 6-12, lanceolate, sub-obtuse and glabrous. Stamens 16-20 in 2 rows one above the other, sub sessile, anthers hairy, cordate at the base, the connective produced to a point. Ovary is densely hairy. Berry is oblong, the size of a plum, hirsute while young ultimately nearly glabrous, yellowish when ripe. Seeds 1-2, compressed, straight on one side, curved on the other. It flowers November-January.

It is a medium sized tree. Bark is dark colored and scaly. Leaves are very coriaceous, oblong to lanceolate, sub-obtuse, glabrous, dark green and shining, base tapering, main nerves 15-25pairs,very slender with closely reticulate veins between, petioles long. Flowers are crowded towards the ends of the branches in dense fascicles. Calyx long, divided nearly to the base, segments 4, ovate, sub-acute, the 2 outer glabrous or nearly so, the 2 inner hairy. Corolla is long, tube densely rufous-hairy, both inside and outside, slightly shorter than the lobes. Lobes 6 or (rarely7), oblong, obtuse, fulvous-hairy outside. Stamens 16-18 in 2 rows, filaments are densely rufous-hairy, anther glabrous or with a very small tuft of hairs between the basal lobes, cordate at the base. Ovary is glabrous. Berry oblong- lanceolate, glabrous while young. It flowers November-January. It grows in Western Ghats from Kanara to Travancore and also in the Himalayas.

Traditional uses and benefits of Mahua

Parts wise use of Madhuca longifolia

Other Common Uses of Mahua