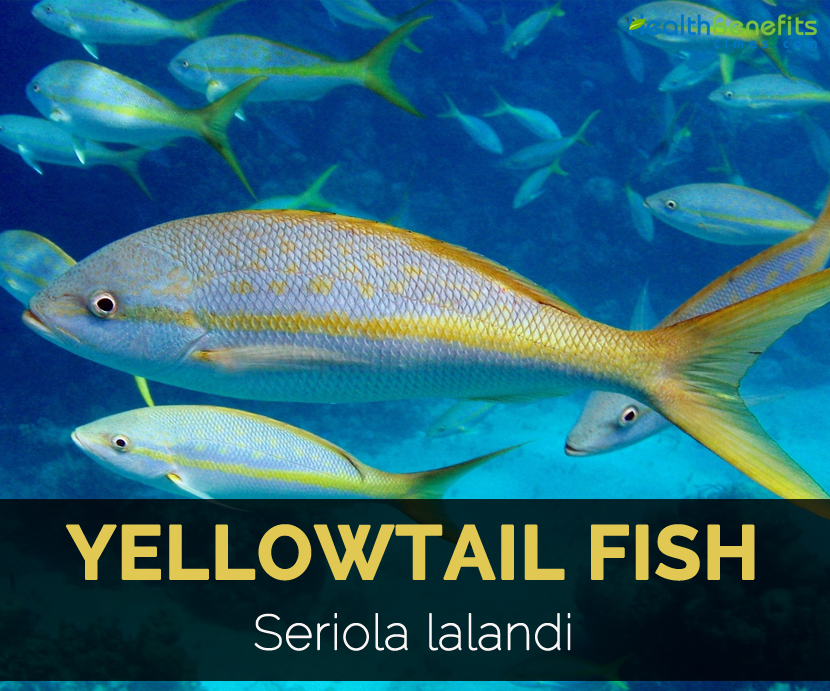 Yellowtail kingfish having scientific name as Seriola lalandi is a pelagic marine piscivore found in various parts of Indo-Pacific abundantly near New Zealand. Although this species is widely distributed, little is known about early life history. In fact the spawning areas are not understood properly and it is challenging to collect larvae or juveniles from open sea. It belongs to family Jack or Caragidae, collectively known as pámpanos and jureles in Mexico. It is also called Yellowtail Jack. There are about nine members in Seriola genus, six are found in Mexican waters, two in Pacific, three in Atlantic and this species is found in both oceans.

They have elongated and compressed fusiform bodies which are taper at both ends and wide in the middle with depth 20-24% standard length. The body is aerodynamic shape having similar lower and upper profiles. The body is blue on upper back with silver to white belly. It has narrow bronze stripe on the middle of its body which has yellow posterior transitions. The fins are yellow. The head consists of long pointed snout and mouth ends under front edge of pupils. The caudal fin base have slightly fleshy keel on each side. First dorsal fin has 7-8 spines and the fin base is shorter in comparison to second dorsal fin base. The pectoral fins are short. After their second dorsal and anal fins, they do not have isolated finlets. Lateral line is slight arch over pectoral fin. It has 19-22 gill rakers and no scutes.

This species are found in large schools offshore at depth of 985 feet. It could reach 1.57 meters in length at maximum weighing 49.5 kg that has been the IGFA world record at current. This fish was caught in 2009 in Japanese waters. These are targeted during game fishing in Northern Mexican waters but is found rare in greater Los Cabos occasionally showing up during the period of 70oF water temperatures.

It is ray finned fish species belonging to Carangidae family. It is known by various names such as forktail, amberjack, white salmon, mossback or by Spanish name jurel.

It is carnivorous and consumes various fish such as sardines, mackerel, squid, anchovies, smelts and crab. They are found in schools at surface of water and also deeper. It prefer 21–22 °C (70–72 °F) water temperature and is found in water between 18 and 24 °C. When the temperature is cooler than 18 °C then yellowtail sink into deep waters in order to conserve energy.

Yellow Kingfish is a yellowtail amberjack subspecies belonging to genus Seriola. It is found off southeastern Australia and Northeast coast of North Island of New Zealand. Very little information is achieved about habitat preferences, juvenile life stages, wild reproductive behavior and migration patterns. Adults are found in rocky reefs, drop-offs in coastal waters and rocky outcrops and also around offshore islands and pinnacles. It reaches to the maximum length to 180 cm. It is consumed drying, sashimi and grilling.