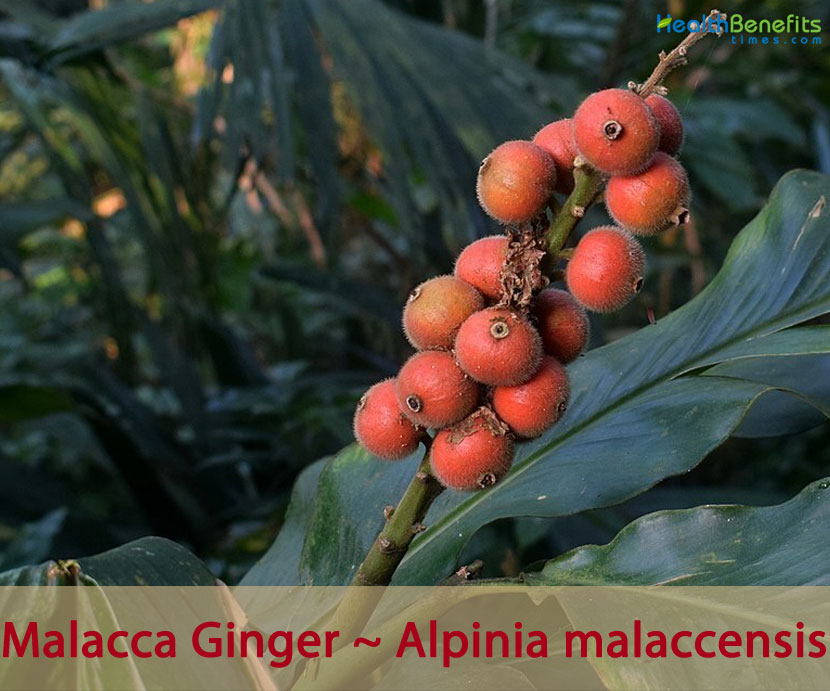 Alpinia malaccensis scientifically known as Malacca Ginger is a robust herb belonging to Zingiberaceae family. The plant is mostly cultivated for ornamental and medicinal purposes. The plant is native to Northeast India to Indochina, Assam, Myanmar, Thailand, Peninsular Malaysia to China—Xizang and Yunnan. It is cultivated in India, Java and Southern Java. Oil is obtained from dried rhizome. It has numerous medicinal properties. The plant is used medicinally, as a food and also supplies an essential oil. Some of the popular common names of the plant include Malacca Ginger, Malacca Galangal, Rieng Malacca and Ornamental Ginger. Alpinia malaccensis is a robust herb that is strongly aromatic when bruised.

Malacca Ginger is a robust, perennial, rhizomatous herbaceous plant that normally grows about 1.8-3 m or more in height. The plant is found growing in secondary vegetation, bamboo and teak forest, brushwood and ravines, primary forest, shaded rocky outcrops and open areas near streams or rivers. The plant prefers soils rich in organic matter from near sea level. The plant produces leafy stems 2 – 4 meters tall from stout rhizomes just below the soil surface, growing close together in large clumps. Ligule is 2-cleft, up to 1 cm and slightly tomentosa. They have a self-supporting growth form.

The plant has large glossy green leaves arranged in 2 rows on the upper half of the stem. Leaves are oblong-lance or lance shaped, up to 60-90 cm long and 10-15 cm wide and abaxially pubescent; below velvet-hairy, base pointed and tip tapering. Petiole is 2 cm and is grooved. 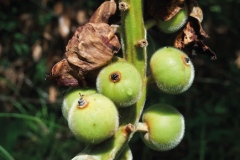 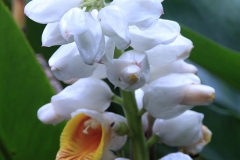 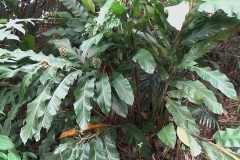 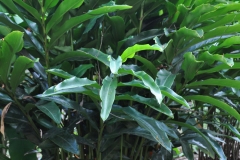 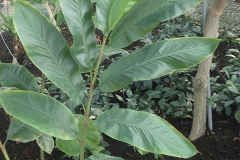 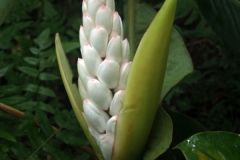 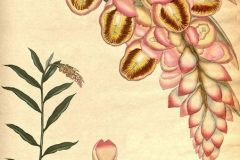 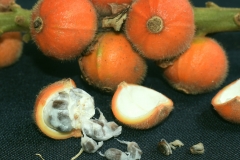 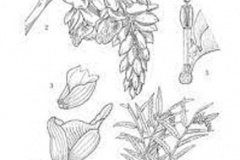 The inflorescences are the showiest parts of the plant. They are held erect at the tip of the stem, bearing among the largest of the Alpinia flowers. Flowers are borne in erect racemes, up to 35 cm; axis stout, densely yellow velvet-hairy; bracteoles white, broadly elliptic, 3.5–4 cm. Flower-stalk is about 7 mm, densely yellow velvet-hairy. Calyx is bell-shaped, about 1.5 cm, densely silky. Flowers are white, silky; tube about 1 cm; lobes oblong-lanceshaped, 2.5–3 cm. Lateral staminodes are absent. Lip is yellow with red stripes, ovate, about 3.5 cm, tip notched. Stamen is about 2.4 cm long. Ovary is hairy.

The flowers are very attractive; especially the bright yellow lip mottled with red at the base, with red lines extending to the edge of the lip. Fully open flowers emit a slightly foul smell similar to rotten meat. Flowering normally takes place in between April till May.

Fertile flowers are followed by capsule that is almost spherical about 2 cm in diam., with slight depressions at each end. They are covered with fine hairs and turn orange when ripe. If crushed, the fruits emit a smell like the leaves of Piper sarmentosum, a culinary spice and salad, known in Malaysia as ‘daun kadok’.