Trending
You are at:Home»Herbs and Spices»Facts about Malva Nuts Tree 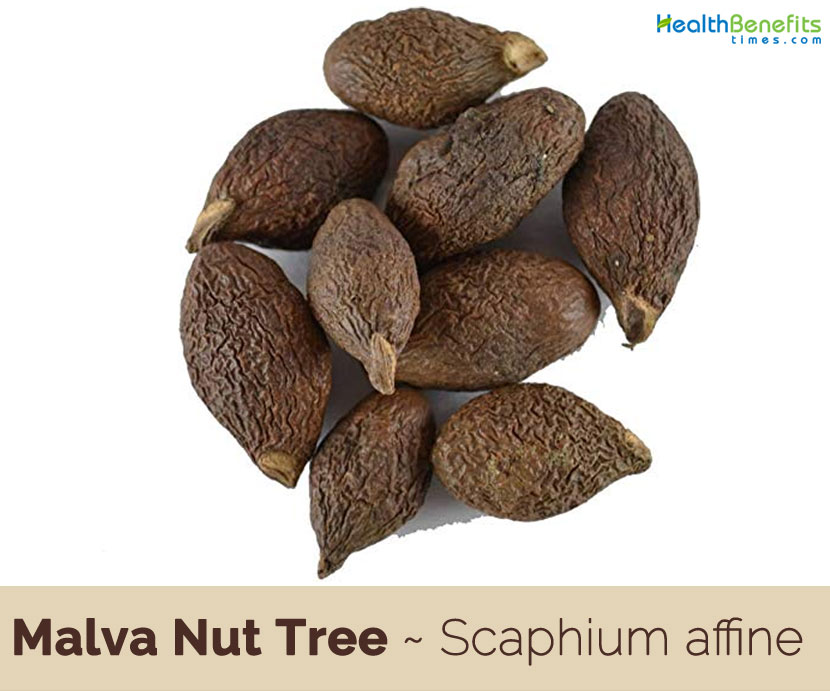 Scaphium affine or Sterculia lychnophora commonly known as Malva Nut Tree is an evergreen tree species in the family Malvaceae and subfamily Sterculioideae. The plant is native to Myanmar, Cambodia, Laos, Vietnam, Thailand, Peninsular Malaysia, Sumatra and Borneo (throughout the island). It may be known as the malva nut tree, or occasionally the Taiwan sweet gum tree, Malva Nut, Makjong and Kembang Semangkok and has culinary and traditional medicinal uses, although these may also apply to the similar Scaphium macropodum. In China, malva nut is used in tea as well by mixing with other ingredients such as sugar candy, red date, haw, licorice, chrysanthemun flower, lilyturfroot, and jasmine tea. The advantage of such tea is supposed to reduce the “hotness” of the body, and nurture the body.

According to the Chinese medicine, the use of “sterculia lychnophora” is to remove heat from the lung, to cure sore throat, to counteract toxicity, and to relax the bowels. Therefore, when a person has symptoms such as hoarseness of voice, dry cough, and sore, dry throat due to heat in the lung; constipation with headache and bloodshot eyes should consume malva nut by putting it into boiling water.

Its seed is used in traditional Chinese medicine as a coolant and it also used for gastrointestinal disorders and for soothing the throat. As a result it is collected as a major non-timber forest product in Laos, and that is country’s second export crop after coffee. The flesh surrounding the dried seeds swells to eight times its original volume when soaked in water, forming an irregularly shaped, reddish gelatinous mass. After being soaked and the seed kernel removed, the flesh is mixed with granulated white sugar, ice, and soaked basil seeds, and drunk as a cooling drink in Vietnam, Thailand, Laos and Cambodia. They are sometimes also used, along with other ingredients; in sweet, cool soups similar to the Chinese tong Sui.

Malva Nut Tree is a large and straight upper canopy, perennial evergreen tree about 18 – 40 meters tall with greyish-brown fissured bark and with a bole diameter up to 260 cm above the thick, spreading buttresses. Buttresses are up to 2 m. Twigs are stout, glabrescent, with prominently raised large leaf scars. Young shoots are reddish-brown and pubescent. Stipules are subulate, ferruginous, tomentose, caduceus. The plant is found growing in tropical rainforests such as undisturbed mixed dipterocarp forests, (peat)-swamp forests, sub-montane forests, well-drained undulating hillsides and ridges. It is found growing on fertile, well-drained, rich clay, sandy soils and on rocky and shallow soils.

Leaves are variable in shape and size, broadly ovate, ovate, elliptical, oblong or lanceolate, 8-40 cm long and 7-30 cm wide, shallowly cordate, truncate, rounded to broadly cuneate at base, acute or acuminate at apex, with 6-11 pairs of secondary veins, glabrous. Petioles are 5–21 cm long, swollen at both ends. 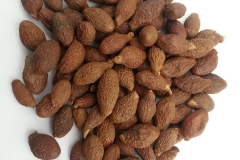 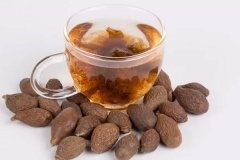 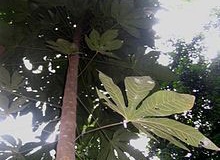 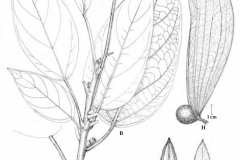 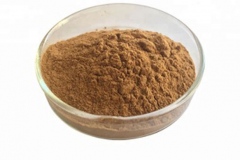 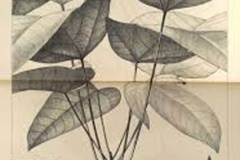 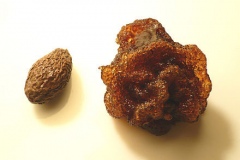 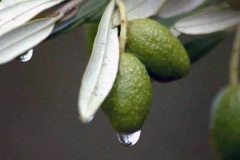 The blooming takes place irregularly every 3-4 years with unisexual panicle inflorescences on the same plant, terminal or axillar, 3-20 cm long, compact, pubescent, bearing tiny flowers, about 5 mm of diameter, with campanulate calyx with 5 curved lobes of greenish white color. Flowering normally takes place from January to April, main flowers in March. Fertile flowers are followed by a follicle, up to about 20 cm long and 5 cm broad, initially greenish yellow, then brown when ripe, foliaceous, dehiscent with hull shape that accelerates its dispersion through the wind, containing one only ellipsoid seed placed at the extremity, 3 cm long and of 1,5-2 cm of diameter, wrinkly, of brown color.

The seeds are commonly harvested from the wild to make a popular drink and for medicinal purposes. The wood is a source of ‘kembang semangkok’ timber and is harvested from the wild for local use and for trade. This species has been heavily exploited, and trees only flower every 1 – 3 years. Hence the number of mature trees is very low. It is often found in protected areas and conserved in some concession areas, but it is threatened by the destructive practice of chopping down the tree to collect the fruit