Trending
You are at:Home»Herbs and Spices»Traditional uses and benefits of Mangrove Trumpet Tree 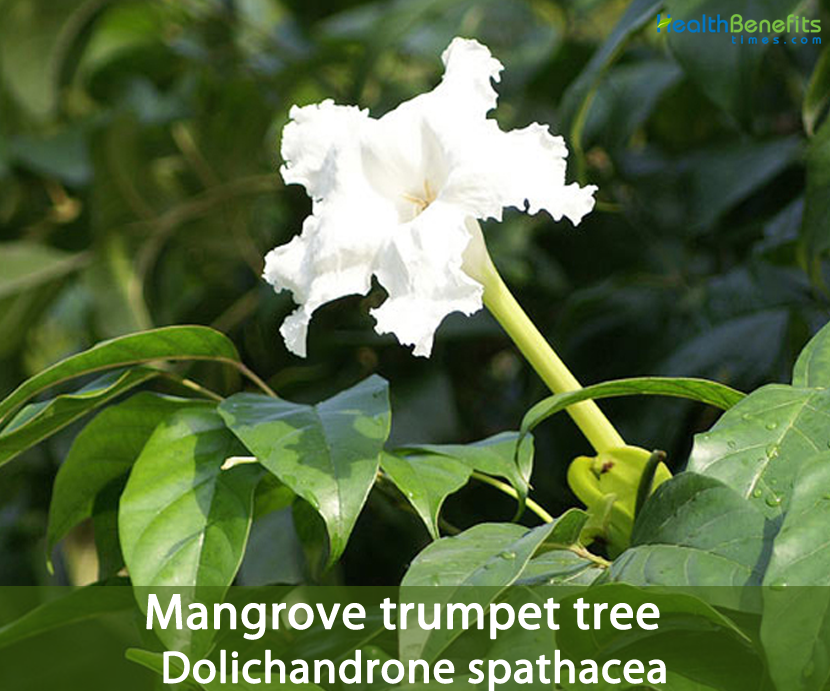 Dolichandrone spathacea, popularly known as tui or mangrove trumpet tree is a species of plant in the Bignoniaceae (Trumpet-creeper family). The plant is native to Southeast Asia, South India, and Sri Lanka to New Caledonia. Apart from mangrove trumpet tree it is also known as Tui and Singapore mangrove. The scientific name derives from the Greek words dolichos meaning long, and andron meaning male and referring to the long stamens of the flowers, and spathe meaning broad leaf blade. The plant is harvested from the wild for local use as a food, medicine and source of wood. It is sometimes grown as an ornamental, valued especially for its fragrant, showy flowers. Although Dolichandrone spathacea is widespread, it is uncommon in many parts of its range. It is threatened by the loss of mangrove habitat throughout its range, primarily due to extraction and coastal development.

Mangrove trumpet tree is an attractive, evergreen tree that normally grows up to 20 meters tall with a bole up to 40 cm in diameter. Old trees have massive trunks that are fluted at the base. Trunk is cylindrical, short and often crooked. Bark is grey to dark brown, shallowly ridged and fissured, slightly scaly. The plant is found growing in undisturbed lowland forest, secondary formations, mangroves, along tidal streams, along rivers, in swamps, occasionally also in the sandy soils of keranga forest. It is usually found on sandy to muddy soils in the wild, rarely on limestone, but in cultivation it tolerates a wide range of soils. Although its natural habitat is swamps, it can adapt to drier sites. Plants are tolerant of salt-laden winds. It can also tolerate waterlogged soil that is freshwater or brackish.

Leaves are compound, opposite to sub-opposite, usually imparinnate, 30 to 40 centimeters long with 9–11 leaflets and petiole up to 8 cm long, lenticels prominent, petioles and rachis furrowed on upper surface. Leaflets are opposite, lanceolate to ovate lanceolate, membraneous, terminal leaflet 10–17 cm long and 4–5 cm wide, laterals are smaller, base asymmetrical, apex acuminate, midrib depressed on adaxial surface, peltate scales present on both surfaces when young, 0–5 extra-floral nectaries on abaxial surfaces, occasional on adaxial, domatia present as hair tufts. Young leaves are slightly pinkish and somewhat sticky. At times the tree may be nearly leafless.

The plant produces bisexual flowers that develop on flowering shoots. Flowers are borne on short, terminal, few-flowered racemes in clusters of 2-10 flowers. The flowers in the cluster bloom one at a time and are very fragrant. Calyx is 4 to 5 centimeters long, spathe like, and split down one side to the base. Corolla is fragrant, white, with a rather slender, cylindrical tube 15-20 centimeters long with ruffled edges, becoming funnel-shaped or bell-shaped above, 5 to 7 centimeters in diameter. The flower is composed of a long thin tube that expands near the opening and spreads abruptly into 5 rounded lobes with frilly edges.

The flowers in the cluster bloom one at a time and according to Corners “very fragrant” while Tomlinson describes it as “a pervasive scent”. According to Hsuan Keng, the flower opens in the early morning and closes at noon, but according to Corners, it blooms at dusk and the flower drops off at sunrise or earlier, while Tomlinson says they bloom in the early evening and the flower usually lasts for only one day. According to Tomlinson, nectar accumulates copiously at the base of the trumpet tube. Suggestions for pollinators include very long-tongued moths (Corners); long-tongued ‘nocturnal animals’ probably hawk moths (Tomlinson). Apparently, no pollinators have been observed so far. Self-pollination also occurs.

Fertile flowers are followed by long, flattened, curling bean-like pods that are 25-60 cm long, 2 to 2.5 centimeters thick and contain many seeds. The pods are green at first, turning brown as they mature. The seeds resemble small rectangular wheat biscuits; they are pale white to dark grey, small about 12–19 mm long and 6–9 mm wide, rectangular to square, with a corky wing. They float readily and are probably dispersed by water and not wind. 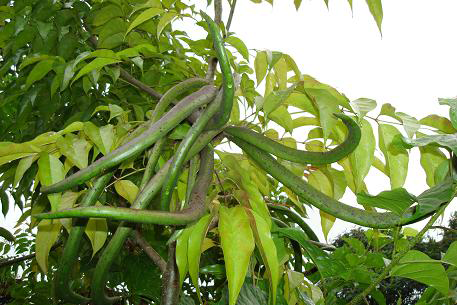 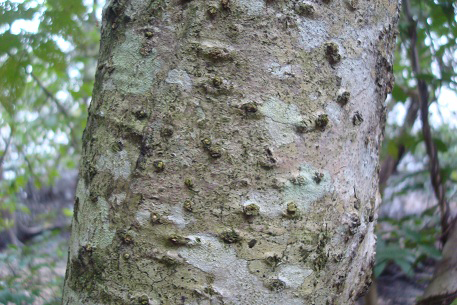 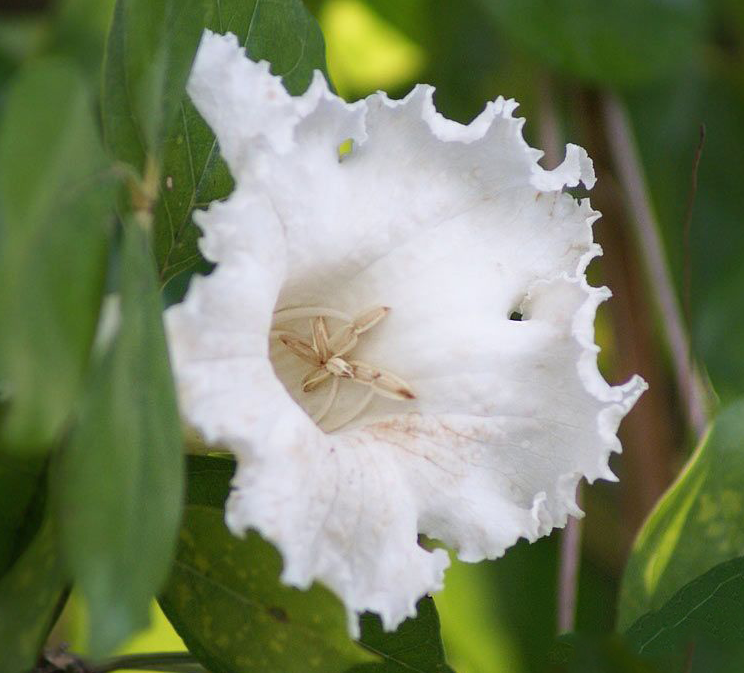 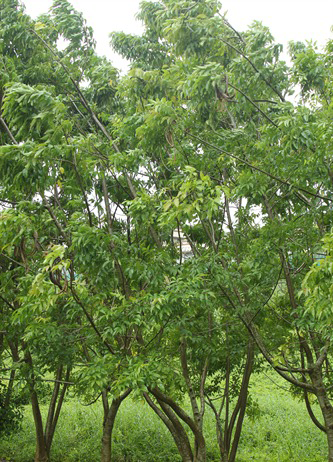 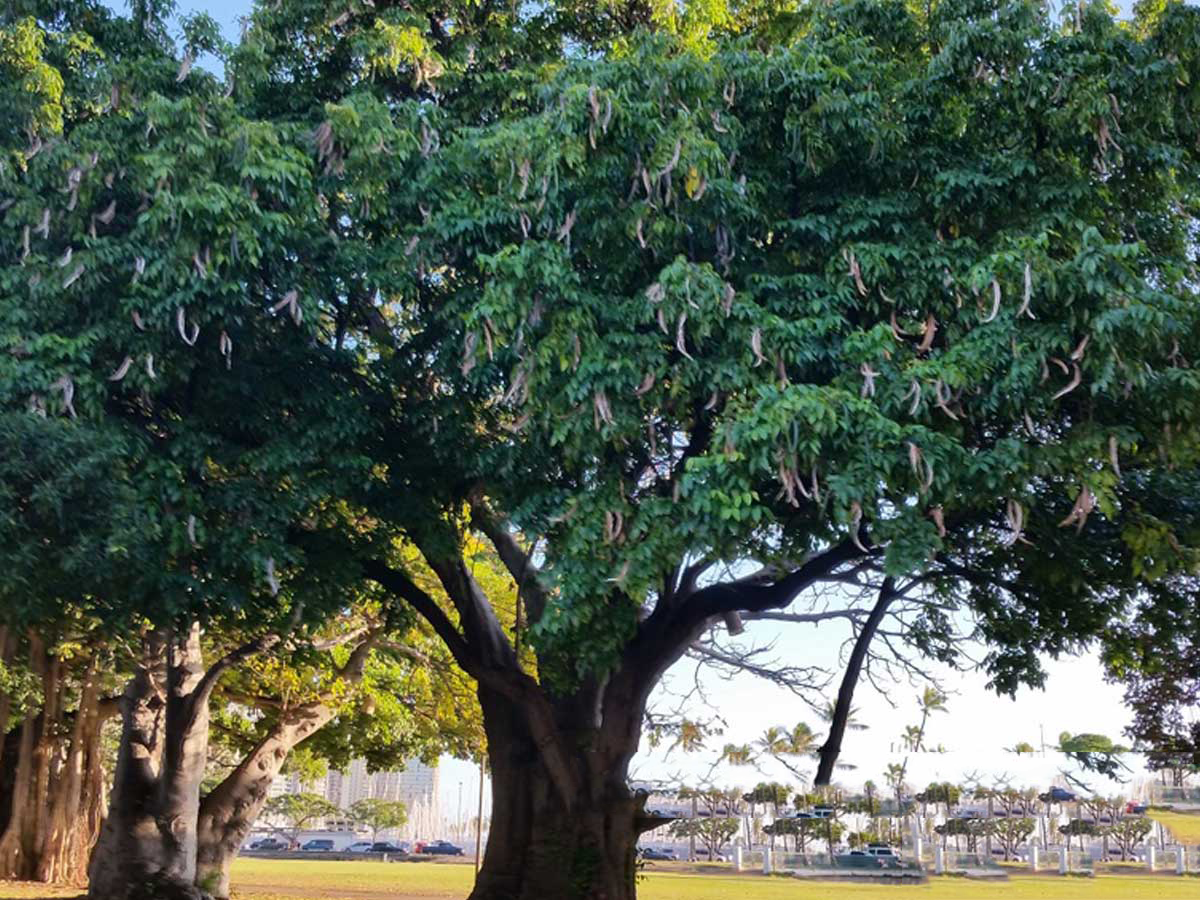 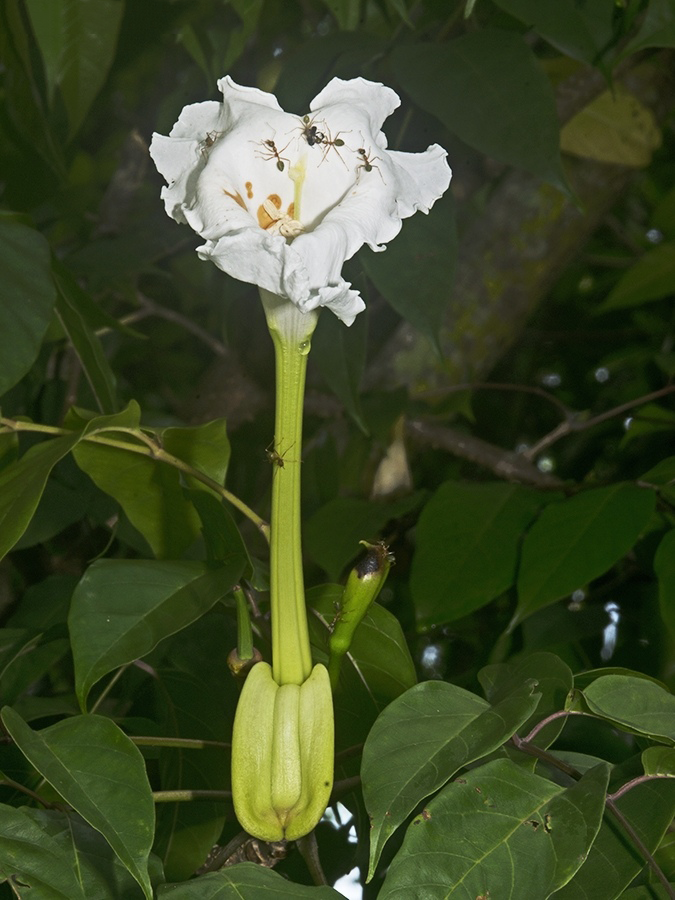 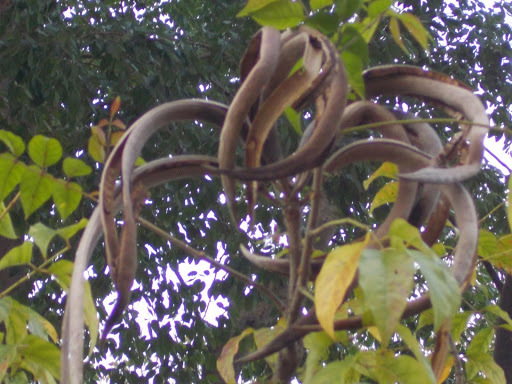 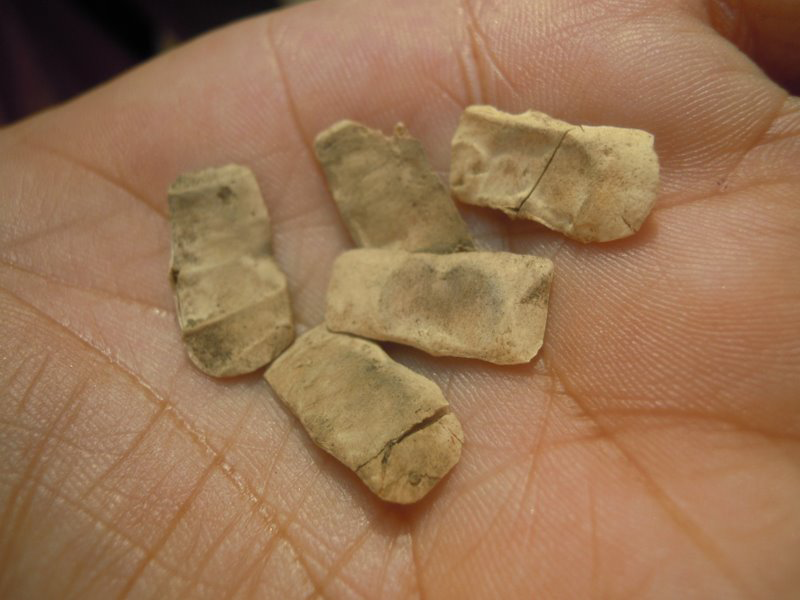 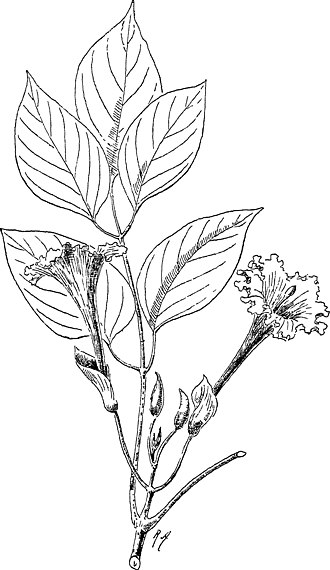 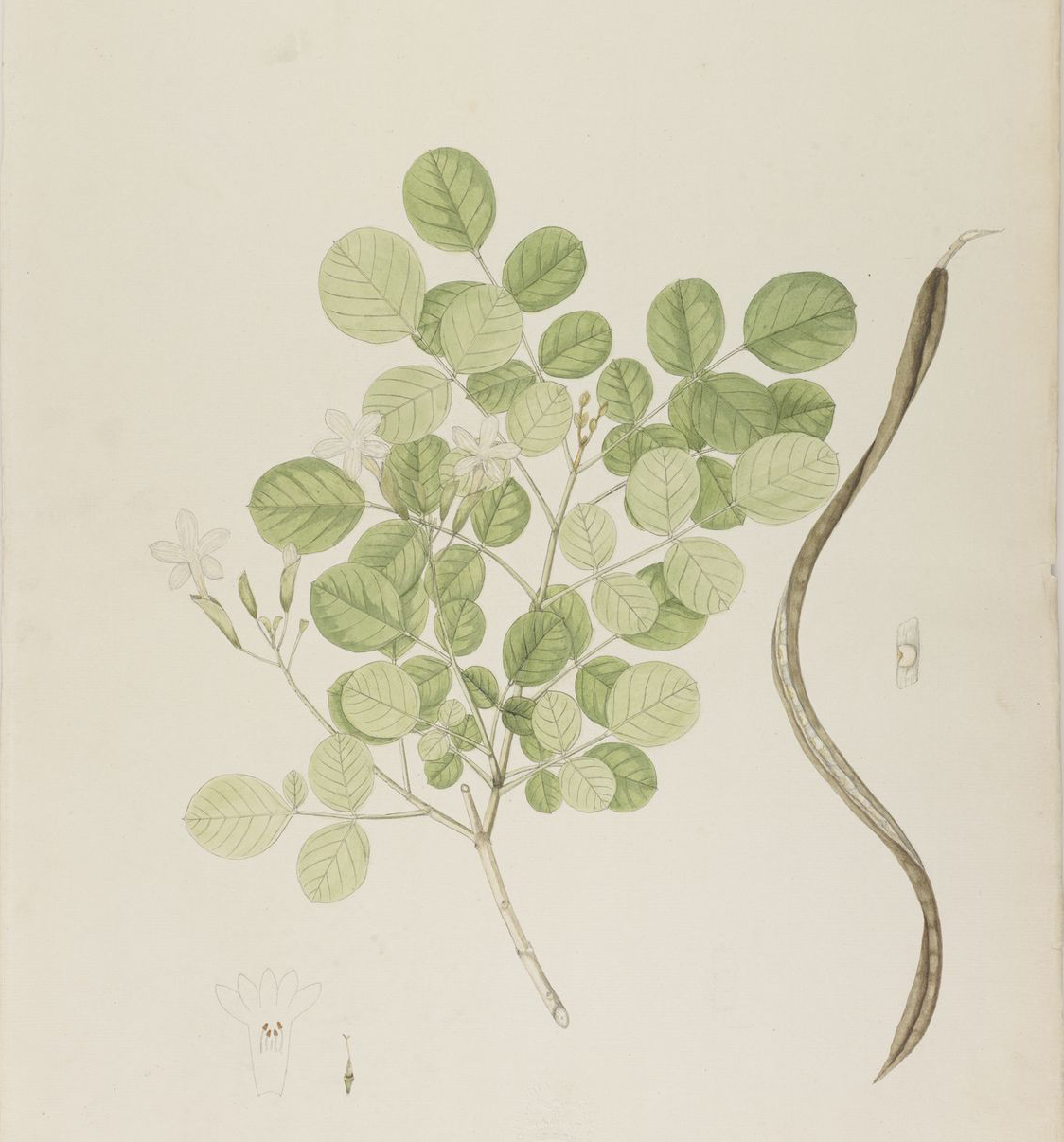 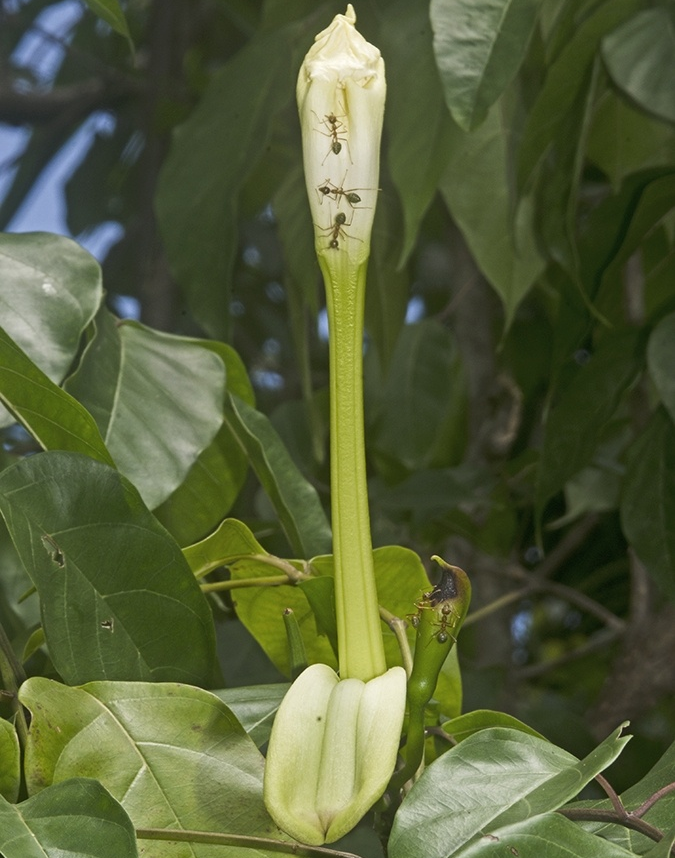 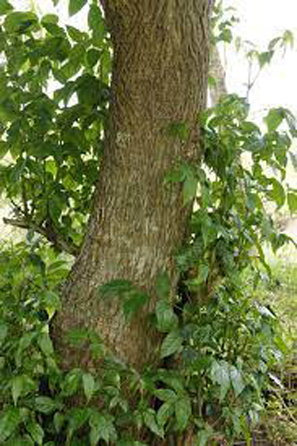