Known scientifically as Lathyrus palustris , Marsh Pea is a perennial plant that also has a number of other common names including Slenderstem Peavine, Marsh pea, Marsh Vetchling, Wing-stemmed, Wild Pea-vine, Blue marsh vetchling and Wild pea. The plant is native to Europe, parts of Asia, and North America. It is present throughout North America except Florida, South Carolina, Alabama, Mississippi, Arkansas, Kansas, Montana, Idaho, Wyoming, Utah, Nevada, Arizona, Colorado, New Mexico, and Hawaii.  It also exists in parts of Canada that border the USA.  Lathyrus comes from the Greek word lathyros, which means a legume. Palustris comes from the Latin word, which means marshy or swampy.

Marsh Pea is a perennial plant that grows about 25 to 80 cm (10 to 31 in) tall. The plant is found growing in rich ground, damp meadows, on river banks, on the margins of ponds, by lakes and near the sea, and sometimes in coastal hedgerows, low prairies, stream valleys, lakeshores,  wet prairies, interdunal swales, borders of marshes, fens, sedge meadows, low areas along streams, soggy thickets, conifer swamps, ditches and swales and borders of forests. This wildflower occurs in both sandy and non-sandy habitats. The roots are taproot and there are rhizomes that can fix nitrogen. The plant climbs with branched tendrils that can be found at the terminating end of leaves, in place of a terminal leaflet.  The tendrils usually have between two and five branches.

Leaves are compound in 2 to 4 pairs; attachment is alternate with the leaflets attached oppositely. Each leaflet is generally elliptical, up to 2½ inches long and ½ inch wide, though they can range from short and wide to long and narrow, tapering to a point at both ends. There is a tendril at the end of the leaf stem that entwines around other plants.

The pair of leafy appendages (stipules) attached to the stem at the leaf joint are small and narrow, pointed at both ends with the upper portion nearly twice as long as the lower, in outline shaped like half of an arrowhead. Stems are usually, but not always, “winged”, making it look and feel ribbon-like. Stems and leaves may be hairless or hairy to varying degrees, and often tangles itself in the surrounding vegetation.

Individual racemes of 2-8 flowers develop from the axils of compound leaves. The peduncles of these racemes are about as long as, or a little shorter than, the length of the compound leaves. Each flower is about ½-¾ inches long, consisting of 5 petals with a pea-like floral structure, a tubular calyx with 5 teeth, several stamens, and a pistil with a single style. The petals consist of an upright banner and a pair of projecting wings that enclose the keel. These petals are mostly reddish purple; although the petals forming the keel and the base of the remaining petals are paler. The banner has a network of purple veins. The calyx is reddish purple and mostly glabrous, although its teeth may be slightly ciliate along their margins. The blooming period occurs from July to August, lasting about 1 month. 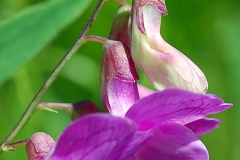 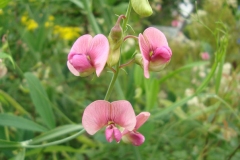 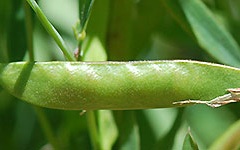 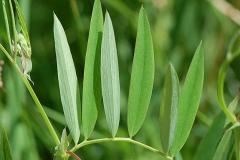 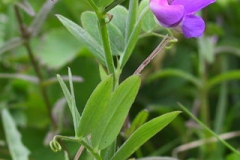 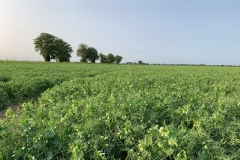 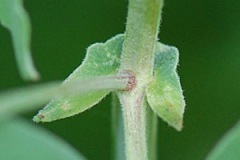 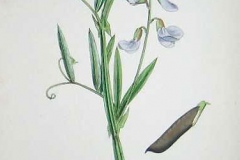 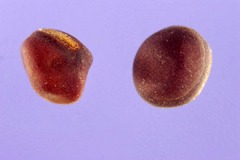 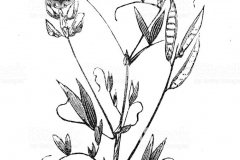 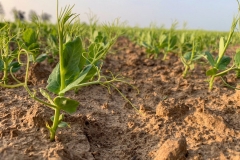 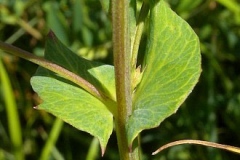 Later, the fertile flowers are replaced by flat brown dehiscent legume pod that has short red glandular hairs or is glabrous.  It is 4-6 cm long and 4-5 mm wide. They are initially green turning to dark brown at maturity.  Each seedpod splits open into two valves to release its seeds. The small brown seed is 3-3.5 mm long and is globoid in shape and somewhat flattened.